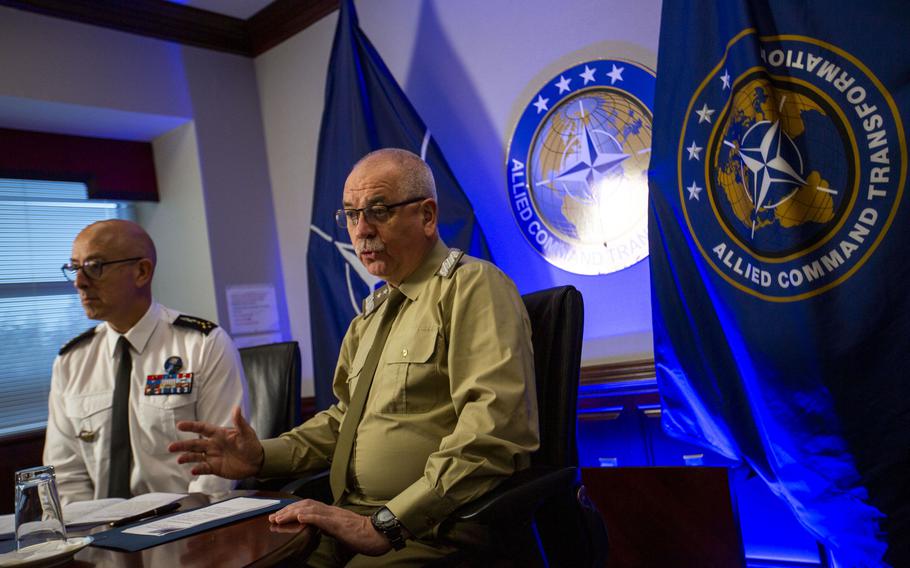 “The Russian invasion of Ukraine is something that changes not only the security of Europe,” said General Janusz Adamczak, Director General International Military Staff. “But it impacts the security of the world.”

Adamczak, as well as French Air Force General Philippe Lavigne, Supreme Allied Commander Transformation, participated in a media roundtable Wednesday, offering insight in how the addition of Finland and Sweden would empower the alliance’s collective defenses.

“The initial assumption — at least by (Vladimir) Putin and Russia — was to end the war within two or three days,” Adamczak said. “This was has been lasting for more than nine months now.”

While Finland and Sweden are not yet members of NATO, ornaments bearing the countries’ flags were nestled amongst those adorning a Christmas tree at the alliance’s headquarters in Norfolk.

“They are not members yet, but are strong partners,” said Jay Paxton, spokesperson for NATO’s Strategic Command.

Finland and Sweden simultaneously handed their official letters of application to join NATO on May 18, abandoning longtime policies of military nonalignment and Nordic neutrality. To date, 28 of NATO’s 30 members have approved the countries’ applications to join NATO. However, the latecomers will not become official members of the alliance until Hungary and Turkey ratify the requests. Unanimous approval is required.

Finland and Sweden will bring experience in dealing with hostilities from Russia to NATO — history, the generals said, the countries have not forgotten.

“We need their expertise. They already know the Russians — how they are doing the job, how they are thinking,” Lavigne said.

Lavigne praised Finland’s defense industry and “total defense” conscription as some of the warfare capabilities the country would bring to the table.

A NATO that includes the two Nordic states, the generals said, would bolster deterrence efforts in the Baltic Sea and Arctic Ocean — potentially giving NATO superiority in a strategically important region. The new members would also crowd NATO against Russia’s western board for more than 800 additional miles.

“That is part of the game here,” Adamczak said. “Finland itself is very well prepared to face the threat of this battle, and with the support of the allied nations, I think ( Finland) will be even more effective.”

In the past two years, Adamczak said, NATO has strengthened forces on the eastern flank. Following Russia’s invasion of Ukraine in February, the allies established four new multinational battlegroups in Bulgaria, Hungary, Romania and Slovakia, which doubled the number of troops on the ground and extended NATO’s forward presence along the Alliance’s eastern flank – from the Baltic Sea in the north to the Black Sea in the south.

The troops, more than 10,000-strong as of November, are ready to respond should there be an attack on an allied NATO member.

”We need to be prepared if the situation deteriorates and we have to increase the posture — the number of troops — within a short period of time,” Adamczak said. “That is how we are prepared for that. We are training, we are thinking, we are developing our concept to be able to quickly increase our presence.”

Once Hungary and Turkey ratify Finland and Sweden’s requests, the ratification instruments must be deposited with the United States government.

“With 30 nations — soon 32 — I know that our unity is the alliance’s center of gravity. That unity is based on the values we all share: freedom, democracy, human rights, the rule of law and the shared goal of defending our values,” Lavigne said.