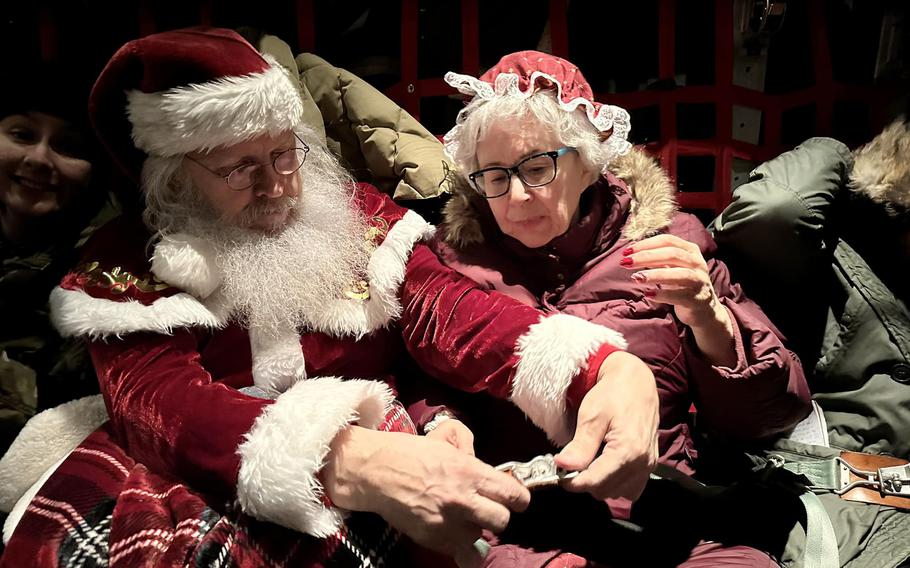 (Tribune News Service) — Operation Santa's trip north to Nuiqsut started in a conference room inside an Alaska National Guard building on a corner of Joint Base Elmendorf-Richardson early Tuesday morning.

The program dates back to the Eisenhower Administration, and for the last 53 years, the Salvation Army has partnered with the Guard to bring holiday cheer to rural communities all around the state. But the pandemic halted in-person festivities the last two seasons, and this year's trips to Scammon Bay, Minto and Nuiqsut felt a bit more special than usual.

In spite of the long day ahead, attendees were excited introducing themselves and their roles in the day's program.

"I'm Trevor, also with Costco. I am an ice cream elf," said Trevor from Costco.

"I'm Santa Claus. Ya'll better behave yourselves," said Santa Claus, who, along with his domestic partner, spent the entirety of the 11-hour day in character.

"We are Santa and Mrs. Claus. That is all," said Mrs. Claus, declining to provide a first name.

The Clauses sat side-by-side in their red velvet suits under warm plaid blankets in the chilly belly of a big C-130 cargo plane that took close to three hours carrying around 40 guardsmen, volunteers and Trevor from Costco the 622 miles from JBER to Nuiqsut. The fuselage was packed tight, with a large cube of palletized presents tied down under thick straps, overseen by a loadmaster wearing a jumpsuit, trim mustache and pointy green elf's hat.

At the airstrip in Nuiqsut, an Inupiaq community of 525 people 35 miles upriver from the Beaufort Sea, a fleet of trucks was on hand. Men, women and boys dressed in hunting fatigues, seal skin caps and fur-lined parkas efficiently passed box after box into the pickup beds for transport a few blocks up to the school. At high noon, the sun sat below the southern horizon, but enough color leaked up to stain a patch of sky a deep pastel orange.

"It's just exciting. We've never had this before," said Nellie Kaigelak, sitting on the gym bleachers in the Nuiqsut Trapper School in a pink atikluk.

"It seems like a once in a lifetime thing for us, especially this far north in the village, it's just very exciting," Kaigelak said as classroom after classroom of school kids trickled in. "I think I'm more excited than the students are."

The Guard brought a six-piece band. Dressed in fatigues and festive hats, they launched into holiday standards with three trombones, a tuba, bugle, and the rhythmic jangling of a solitary tambourine. Over a 100 school children sang along to "Jingle Bells," which gave way to thunderous stomping and applause as Mr. and Mrs. Claus walked into the gym and ascended a small stage upon which they sat down in regal thrones to receive hugs and Christmas wishes from dozens and dozens of kids.

Eventually the horns and tambourine gave way to skin drums and traditional Inupiaq songs sung by the Nuiqsut Dance Group. Teenage boys in basketball jerseys and sneakers confidently led a number of invitational dances, hauling up bashful guardsmen twice their height onto the gym floor to dance and stomp along.

"The songs that we were singing, those are all fun dances where everybody can gather, have fun, dance, get together," said John Ipalook, the dance leader.

The community is readying for the Messenger Feast in Utqiagvik later this winter, and putting in lots of work getting the young people as much practice as they can.

"We have a whole bunch of kids, you seen, that are very eager, ready and willing to learn. And that's what keeps us going, teaching," Ipalook said.

Toward the end of the traditional songs, the children turned toward the stage and in unison began chanting "Santa! Santa! Santa!" until Mr. and Mrs. Claus descended from their jolly rostrum and joined in the dancing.

It was a good fall in Nuiqsut. Plenty of caribou were harvested, and the community landed five bowhead whales. Enough that one crew member shared its entire catch with the community of Anaktuvuk Pass, according to Kaigelak.

But the pandemic put a long pause to these kinds of gatherings, particularly celebrations and events welcoming outside visitors, and there was a deep well of welcome throughout the afternoon.

"It meant a lot. It was great and awesome to see something like this happen," said Martha Pausanna, an Inupiaq teacher at the Trapper School.

"My mom wish she came. But I video-called her because she has COVID," Pausanna said. "It's still lingering around."

As the brass band packed up, teachers socked away spare backpacks and ice cream was discreetly moved to the school's freezers. Kids and adults scrambled for photos with Santa. A few even rode out to the waiting cargo plane to sneak a last hug before the Clauses reboarded for the long flight back to Anchorage.