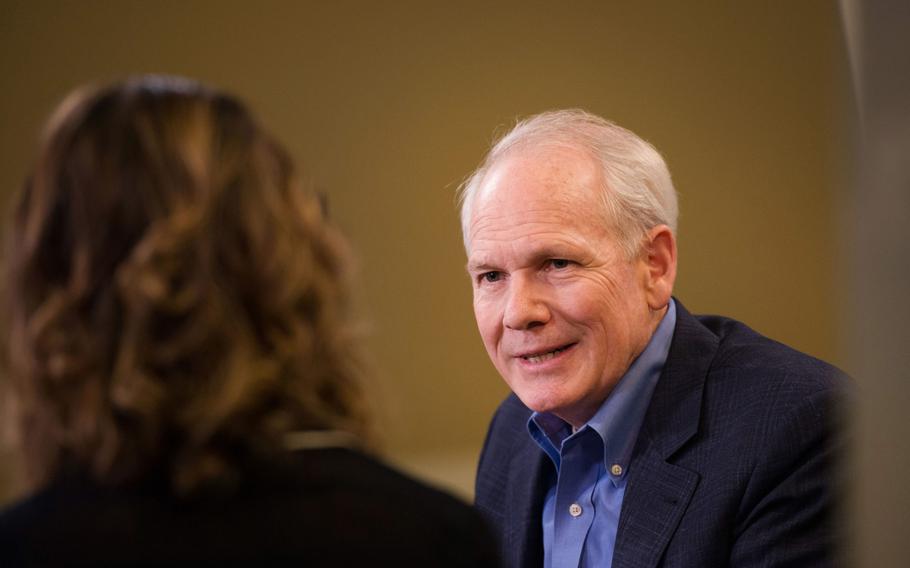 Kurt DelBene during a Bloomberg Television interview in Seattle ON Oct. 11, 2017. (Daniel Berman/Bloomberg)

For the U.S. Department of Veterans Affairs, the mass layoffs in Silicon Valley present a rare shot to snag top talent. With a chronic shortage of tech workers, hundreds of open roles and extra money from Congress in last year’s budget, the agency is keen to seize the opportunity.

Kurt DelBene, the VA’s chief information officer, came to the federal government after roughly 30 years at Microsoft to help fix Healthcare.gov after the site’s infamous crash during the Obama administration. DelBene’s on an ambitious mission to recruit top designers and engineers for the agency, which he intends to make the “absolute best place” for IT in the federal government. Much like any software development or IT company, the agency is looking to fill a variety of roles: engineering leads, product managers, user-experience designers, and customer-support professionals, among others.

Historically, the U.S. government has long trailed the private sector’s pay, driving much of the staffing shortfalls. The tech industry’s bull run widened the gap even further. According to research by Revelio Labs, a workforce intelligence firm, the nearly 2.5 million private tech workers in the U.S. earn an average annual base salary of almost $110,000 - not counting bonuses and equity-based compensation - while the roughly 135,000 tech workers employed by the U.S. government and all its agencies make little more than $80,000 on average. But with the boom turning into a bust, employers from government to finance to automakers are more than ready to scoop up some of the roughly 60,000 tech workers laid off so far this year as recorded by recruiting firm Challenger, Gray & Christmas Inc.

Andy Challenger, the recruiter’s senior vice president, said that the VA is far from alone in its thinking; he’s talked to people in just about every industry that have the same idea about tapping the talent pool. “They’re in the highest-paying industry, with the most favorable conditions, and the best benefits. If they have to go into an office, it’s this half a billion dollar playground, with foosball tables and the best food in the world,” Challenger said of the plush perks tech workers are used to. “It’s really hard to compete, for any industry, so I think government has a particularly difficult task ahead of them.”

Acutely aware of the pressing need for higher pay, DelBene said the VA is working to bring VA salaries more in line with market rates by the beginning of next year. Beyond boosting compensation, the VA is working on streamlining the hiring process, so an official offer doesn’t take six months to deliver. And with the adoption of remote work, the agency no longer has to convince new recruits to move to the nation’s capital.

Enticing enough workers to jump ship from the private sector to close the gap in government will be a daunting task. Last year, just over 1,300 tech workers made the leap, according to Revelio Labs. That’s little more than a rounding error when spread over dozens of agencies across the federal government, which employs more than 2 million people. The agency, which will be hosting hiring affairs and other recruiting events, created a website to answer common questions about working for the government and to call for those interested to submit their resumes directly to oitcareers@va.gov.

Salaries aside, DelBene wants to dispel some of the other myths about what it’s like to work in government. One he says is misguided: That the government is a sleepy backwater running on ancient systems (or none at all, in the stunning case of the Internal Revenue Service), the last place to go for cutting-edge innovation. “You might think you’d come to the federal government and say, oh my gosh, they’re all running COBOL,” he said. That’s the antiquated programming language underlying some government systems that crashed famously during the Covid-19 lockdown while distributing millions in relief payments. While some old systems are still running, the VA has a clear plan for modernization, said DelBene, who also serves as the department’s assistant secretary for technology and information.

“The idea that government is bad at innovation applies to a subset of problems - bad at web apps, maybe,” said Charles Worthington, the VA’s chief technology officer. “But innovation is actually something the government is really pretty good at.” The VA has been especially cutting-edge in health care, he said, with the first liver transplants and cardiac pacemakers pioneered by VA surgeons and researchers.

Worthington initially came to Washington in 2013 for a one-year assignment with the Presidential Innovation Fellows Program. Then, halfway through his fellowship, the Healthcare.gov site crashed - fueling his commitment to the idea that the federal government should have a public service-oriented corps to build most important citizen-facing sites.

“The tech industry, compared to other professions in the country, has not historically had a public-service tradition,” Worthington said. “The most prestigious thing you can do after law school is clerk for the Supreme Court. There isn’t, though, the idea that the equivalent of the most prestigious thing you can do as a top computer scientist or top designer is come work at SSA to deliver a great citizen-facing service.”

Too much of the tech industry is focused on solving problems that simply aren’t that important, such as maximizing the amount time users spend in an app, Worthington said. Joining the government meant abandoning his own startup idea, a live-music app to help people find concerts in their city. He’s had a few “twangs of regret,’‘ and knows his friends in the tech industry have more money to show for their efforts. “But when I think about that product, at the end of the day - who cares, right? You’re helping relatively rich people have a cooler weekend,’‘ he said.

DelBene and Worthington hope some of the laid-off tech workers will see value in considering the VA - and federal government as a whole - for their next venture.

“We’re talking about both the largest integrated health-care provider in the United States and one of the largest financial services institutions in the United States, all combined into one,” DelBene said. “If there are tech folks that are out there that want a challenge, there’s no greater challenge, I assure you, than coming to the VA and helping us with this kind of transformation.’‘