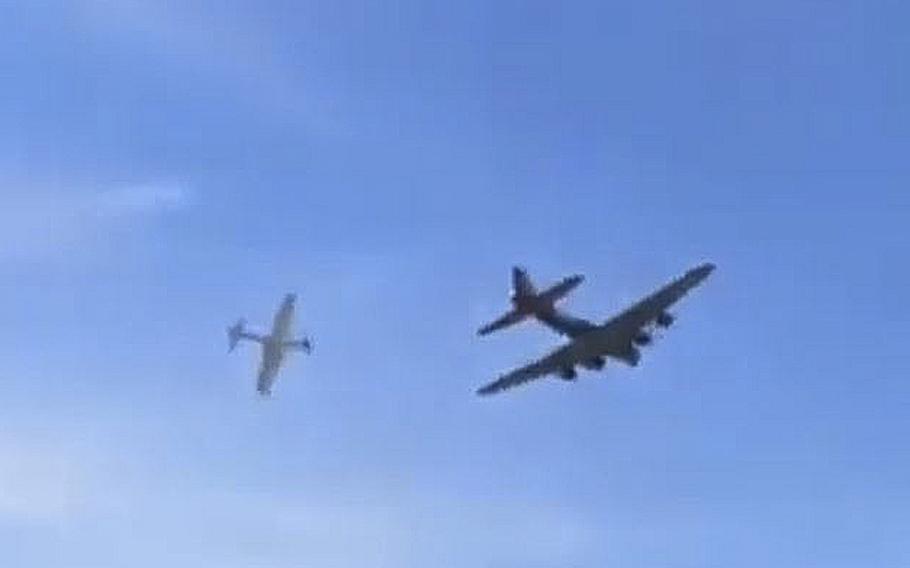 A video screen grab shows a Bell P-63 Kingcobra, left, just seconds before it rams into the right wing of a Boeing B-17 Flying Fortress during an airshow in Dallas on Saturday, Nov. 12, 2022. (Screenshot from YouTube)

(Tribune News Service) — The kind of mid-air airplane collision that happened over the weekend at a Dallas air show is rare in the United States and Canada, and in general, air show accidents in those countries tend to be increasingly less common.

The public has been horrified and captivated by social media and spectator videos of the collision of two Commemorative Air Force planes at the Dallas Air Show Saturday that left six people dead.

But the impression such viral videos leave can be misleading, said John Cudahy, president of the International Council of Air Shows.

"Video footage is catnip for broadcast media," he said Tuesday.

Cudahy said that the accident rate for pilots and crews performing in air shows in the United States and Canada has actually fallen over the last 25 years — and particularly over the last decade.

Cudahy cites several statistics, again for the United States and Canada. Before the Dallas accident, in the last five years, there has been an average of 0.6 fatalities a year. That number includes pandemic years when many air shows — including the show in Dayton, in 2020 — were canceled, which skews the average.

The average number of fatalities has been heading steadily downward, Cudahy said.

"The industry takes the safety in our business very seriously," he said. Air show planners, pilots and performers pore over every accident to glean whatever insight can be won, he said.

"When there's an accident, the information that is gleaned from it is invaluable in helping us to create programs and processes that at least mitigate some of that risk," Cudahy said. "That collective effort has done exactly what you would think it's doing."

Those reviews have changed safety policies by the Federal Aviation Administration and others.

"It's hard to point to the accidents that didn't happen because the safety measures are in place," he said.

Importantly, nobody on the ground was injured in Dallas, Cudahy noted.

After a 1951 accident at a Colorado air show that killed 20 people and injured about 50, the FAA required planes to maintain a distance of at least 500 feet from spectator areas, with greater distances required for higher-speed jets.

Among spectators, there has not been a fatality at an air show in more than 70 years.

A spokeswoman for the CenterPoint Energy Dayton Air Show declined to comment, citing the ongoing investigation into what happened in Dallas.