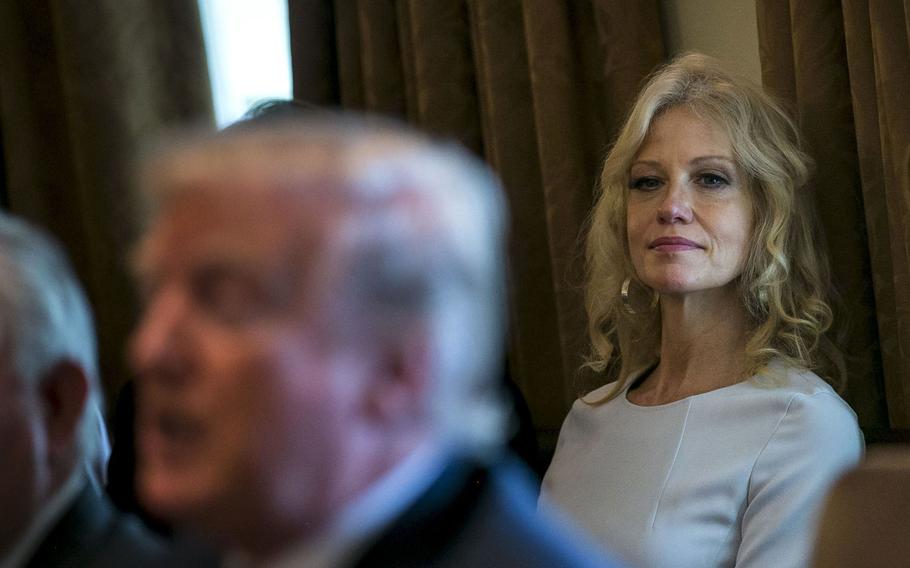 Kellyanne Conway listens as U.S. President Donald Trump speaks during a cabinet meeting at the White House in 2017. (Al Drago/Bloomberg)

Conway, who became the first woman to steer a winning presidential campaign with Trump’s surprise 2016 victory, said that she advised her former boss to delay launching another run until after the midterm elections as not to distract from Republican efforts to take control of Congress.

“I give him a ton of credit for not announcing this year, for not stepping in the way of the midterm candidates, which a lot of people around him, who frankly need him for their next meal and their next gig and their next center of power” may not have recommended, Conway said Thursday at a breakfast event hosted by the Christian Science Monitor.

“I think you can expect him to announce soon,” she said.

Trump has used the midterm cycle to reinforce his grip on the GOP, endorsing candidates from the local level to the U.S. Senate. He is holding rallies in Iowa, Pennsylvania, Florida and Ohio on behalf of those contenders in the days before Tuesday’s elections.

The former president has teased for months that he plans to make another White House run, routinely telling supporters they will “be very happy” with his decision. He’s sent stronger signals in recent weeks, saying at a rally in Texas on Oct. 22 “I will probably have to do it again.”

But he could face a crowded field as other Republicans have also fanned out across the country to support candidates and bolster their own national standings ahead of potential bids.

Those include Trump’s former Vice President Mike Pence, who has taken veiled shots at Trump in recent speeches following their acrimonious split on Jan. 6, 2021, when a crowd of Trump supporters rioted at the U.S. Capitol, chanting “hang Mike Pence.”

Pence has broken from his former boss on endorsing candidates in key GOP primaries and over whether he had the power to overturn the 2020 election. Trump has suggested the GOP base will never forgive Pence for refusing his demands to reject Electoral College votes for President Joe Biden.

Conway said she speaks to Trump and Pence often and that two never bad-mouth each other in those conversations. She likened Trump and Pence’s relationship to “a nasty divorce in the end,” and said “they need to find a responsible way to co-parent the future of the party and the conservative movement.”

She also addressed the potential collision course between Trump and Florida Republican Governor Ron DeSantis, who polls show is the choice of most Republican voters should the former president ultimately forgo another run.

“If I’m Ron DeSantis, I’m sure I can think about running — but why not go be the best two-term governor of the third-largest state in modern history, if not ever, and then walk into the presidency in 2028?” she said.