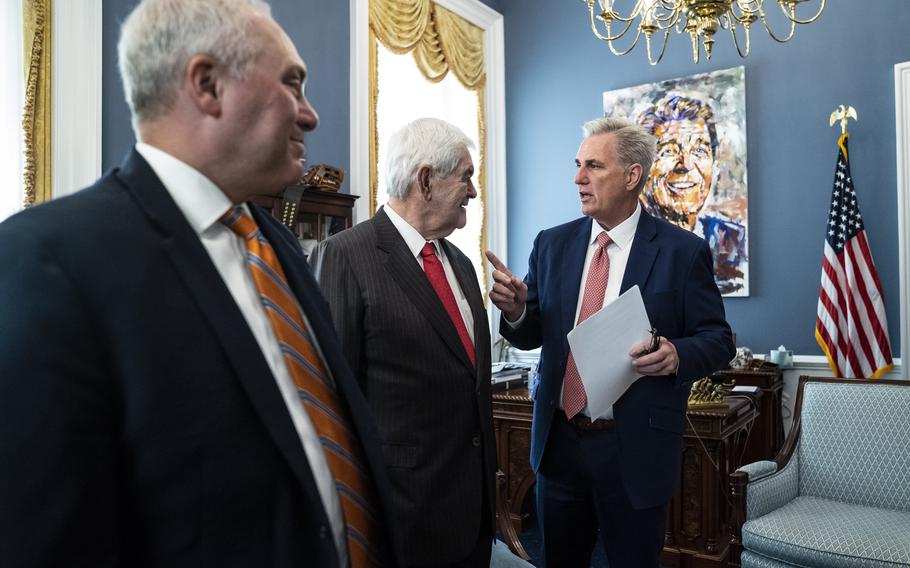 WASHINGTON — Republicans hope to end two years of unified Democratic control of Washington in next week’s midterm elections but are divided over how exactly they would seek to combat inflation and bring down government spending if they do win majorities in the House, Senate or both.

Some fiscal hawks are pushing dramatic spending reforms and overhauls of entitlement programs including Social Security and Medicare, while others are insisting that simply blocking future Democratic legislation and attempting to repeal some of President Biden’s signature achievements will represent enough of a shift toward fiscal responsibility to appease voters.

Either way, the GOP agenda would all but certainly lead to dramatic showdowns with Biden and his veto pen, and Democrats are warning of the potential for government shutdowns and dysfunction, while dreading the raft of oversight investigations Republicans will launch if they gain the gavels. Additional aid for Ukraine as it fends off a Russian invasion may also hang in the balance, as a new crop of Republicans who campaigned on stopping it may be settling into the Capitol come January.

Republican-led committees are expected to launch oversight investigations targeting the Biden administration’s border policies, the withdrawal from Afghanistan last year, its COVID response, the FBI and Justice Department, Hunter Biden’s business dealings, and China, among other targets, members say. Some Republicans have called for impeaching Biden, although others are tamping down that possibility.

Rep. Kevin McCarthy (R-Calif.), in position to become the speaker of the House if it flips to Republican control, has said defunding a portion of Biden’s signature legislative achievement, the Inflation Reduction Act, that boosts the Internal Revenue Service would be his first move. Some Republicans say they are willing to dangle the possibility of defaulting on the federal debt next year to gain leverage to force the change over a Democratic president’s objections.

“I don’t believe that anybody wants to shut down the government, but the debt limit and the spending fights provide leverage for Republicans to push for reforms that we’ve campaigned on to address the major issues and challenges of the day,” Rep. Jim Banks (R-Ind.) said. “And hopefully President Biden would be willing to come to the table and be wiling to negotiate with Republicans.”

Rep. Jason T. Smith (R-Mo.), who’s seeking to lead the Ways and Means Committee, said in a statement that Americans want Congress to use the debt ceiling and every other opportunity to tackle rising prices, secure the border and to “repeal the 87,000 new IRS agents Democrats are hiring to target American families.” (The Inflation Reduction Act does not explicitly direct the hiring of more agents, but Republicans argue that the approximately $80 billion it allocated to the agency to boost enforcement and taxpayer services will result in a massive staffing increase.)

Banks said he believed Republicans’ first piece of legislation would be an energy independence bill that would allow for more permitting for fossil fuel extraction and to restart construction on the Keystone Pipeline.

But Republicans are also candidly telling their voters not to expect much legislation to come out of their tenure, given Biden’s veto power.

“We certainly won’t have the White House and I don’t think Joe Biden and his handlers are exactly eager to sign Republican legislation into law, so our hearings are going to be the most important thing that we can have,” Rep. Lauren Boebert (R-Colo) told a Republican rally in Colorado in October.

The flurry of investigations could lead to impeachment proceedings against one or more administration officials or even the president himself. While in the minority, some House Republicans have already introduced articles of impeachment targeting Biden, Vice President Harris, Department of Homeland Security Secretary Alejandro Mayorkas and other Cabinet officials. There are also plans to subpoena former New York governor Andrew M. Cuomo (D) over his handling of COVID-19.

Mayorkas has attracted particular vitriol over his handling of the border, with at least 12 Republicans already signing onto articles of impeachment targeting him over it.

“We will give Secretary Mayorkas a reserved parking spot [at the Capitol] he will be testifying so much about this,” Rep. Steve Scalise (R-La.) said while unveiling the Republican agenda in September.

Some more right-wing Republican members, including Rep. Marjorie Taylor Greene (R-Ga.), have called for impeaching Biden, and the planned investigation into his son could be one avenue into that outcome. Greene introduced articles of impeachment against Biden last year that accused him of abusing his office when he was vice president because his son was simultaneously on the board of a Ukrainian energy company. Other impeachment proposals have targeted the withdrawal in Afghanistan, Biden’s border policies and his handling of energy policy. (Harris’s impeachment threat was also over the Afghanistan withdrawal.)

Hunter Biden has faced a federal investigation into his finances, and a decision about charges is expected to come from the U.S. attorney in Delaware, a Trump appointee. Republicans have pushed for a special prosecutor to handle the case.

But McCarthy and some other Republicans have tamped down the possibility Biden would face impeachment, despite the drumbeat from some members. “I don’t see it,” Rep. Patrick T. McHenry (R-N.C.) said. “It’s not on my agenda.”

A Senate GOP majority, in addition to the House, could mean twice the investigations into the Biden administration, as well as a sharp slowdown in the rapid pace of judicial confirmations Biden has seen in the Democratic Senate.

Aid for Ukraine could also change under a Republican majority — and could serve as a point of contention between a Republican-controlled House and Senate.

McCarthy said in an interview with Punchbowl News that he would not write a “blank check” for the nation fending off Russian invasion, and many rank-and-file Republicans have begun to object to sending more money overseas. Senate Minority Leader Mitch McConnell (R-Ky.), however, has been staunchly in favor of continuing the stream of funds, which has amounted to about $60 billion so far, and Republicans in the Senate have been more united around the aid. 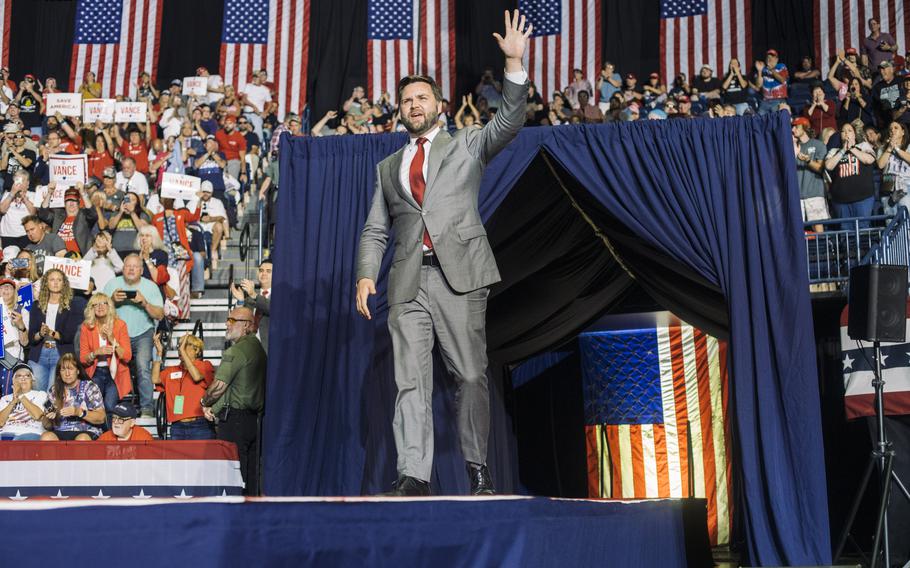 The split reflects a larger rift within the party between old school conservative hawks and a newer breed of skeptics who hew closer to Trump’s “America First” school of foreign policy. Republican candidates for Congress, including J.D. Vance in Ohio and Don Bolduc in New Hampshire, have been campaigning on slowing or stopping the aid.

Biden has already vowed to veto any bill that bans abortion nationally, which some Republican members have been pushing for. McConnell shot down a 15-week ban introduced by Sen. Lindsey O. Graham (R-S.C.), while McCarthy has expressed support for a ban in the past but has not emphasized abortion as part of a Republican House’s agenda.

Senate Republicans are also divided on the question of spending cuts and revising the nation’s entitlement programs. Sen Rick Scott (R-Fla.), the National Republican Senatorial Committee chair, put out a Republican agenda that included requiring Congress to vote to renew Social Security, Medicare and other government programs every five years while increasing taxes on lower-income people. McConnell publicly rejected that plan, although he also declined to put out his own GOP agenda ahead of the midterms.

The same split is playing out in the House, where some Republicans are privately warning that attempting to seriously reform government spending by changing entitlement programs will backfire politically ahead of 2024.

The conservative Republican Study Committee, which includes a majority of House Republicans, put out a model budget last year that would increase the Social Security retirement age and reduce benefits for higher-earning retirees. Some top Republican candidates to lead the House Budget Committee have also said publicly they favor changes to Medicare and Social Security.

“Republicans recognize that if we’re the party in the majority we have a responsibility to look at how we address Social Security, Medicare to make them solvent,” Banks said.

Biden has warned that Republicans intend to “crash the economy” by allowing the federal government to default on its debt “unless we yield to their demand to cut Social Security, Medicare.”

But McCarthy has downplayed that possibility, telling CNBC in October that he’s “never mentioned” Social Security or Medicare and wanted to use debt ceiling negotiations to reform overall spending, not entitlements. A McCarthy aide declined to answer questions for this article, only sharing a link to the House Republicans’ “Commitment to America” agenda.

Many Republicans recall how Paul D. Ryan, the former House speaker, was haunted by his fiscal austerity proposals when he was Mitt Romney’s running mate in 2012 and do not want to face attacks in 2024 over their attempts to limit Social Security or Medicare. Former president Donald Trump, who largely eschewed the traditional GOP message of spending cuts and campaigned on protecting both programs, also changed the political calculus for Republicans.

“I don’t think there are any budget issues that in 2024 Republicans will want voters to remember,” said David Jolly, a former Republican congressman from Florida. “So they won’t do it.”

Stephen Moore, a former economic adviser to Trump, said he’s advised Republicans to stay away from Medicare and Social Security and focus on rescinding money from the Inflation Reduction Act, including its increased funding for the IRS and billions of dollars allocated to promoting green energy.

“I always say, ‘Republicans like to spend money, too,’ “ Moore said. “So we’ll see how much they are able to rein in the spending.”

A House leadership aide, speaking on the condition of anonymity to speak candidly about the caucus’s plan, said entitlement reform would not be a priority. “I honestly do not think that is going to be something that Republicans are going to touch,” the aide said. “I don’t think you want to be scaring elderly people in the midst of an inflation crisis.”

Instead, Republicans may stage a shutdown fight over the Democratic infusion of billions of dollars into the IRS to enhance tax enforcement, which they’re relying on to fund some of the climate initiatives passed in the Inflation Reduction Act. McCarthy has said his first move as Speaker would be to repeal that money. That would probably lead to a showdown with Biden, who is unlikely to want to sign off on the hallowing out of one of his signature legislative achievements.

“There’s so much excessive spending now that we need to claw it back and it can be done,” Rep. Pete Sessions (R-Texas) said.

Republicans may also demand enhanced border security, including a wall, in a debt ceiling negotiation.

The Committee for a Responsible Federal Budget estimates that the Biden administration approved $4.8 trillion of extra borrowing from 2021-2030 through legislation and executive action, including COVID relief. That $2.5 trillion that’s compared with Trump approved at a similar point in his term. (Over his four years, Trump added $7.5 trillion to the deficit.)

A Republican Senate would probably also mean the end of rapid confirmations for Biden’s judicial nominees. McConnell stalled nominations when he won the Senate during former president Barack Obama’s tenure.

“Under a Republican majority, nominees will receive more thorough scrutiny than they have for the last two years,” Sen. Charles E. Grassley (R-Iowa), who would probably lead the Judiciary Committee if the Senate flips, said in a statement. “We’ll certainly stop being complacent rubber stamps for President Biden’s picks like Democrats have been, especially when the nominees are overtly political.”

The Washington Post’s Leigh Ann Caldwell and Marianna Sotomayor contributed to this report.