How votes are cast and counted is increasingly decided in courtrooms 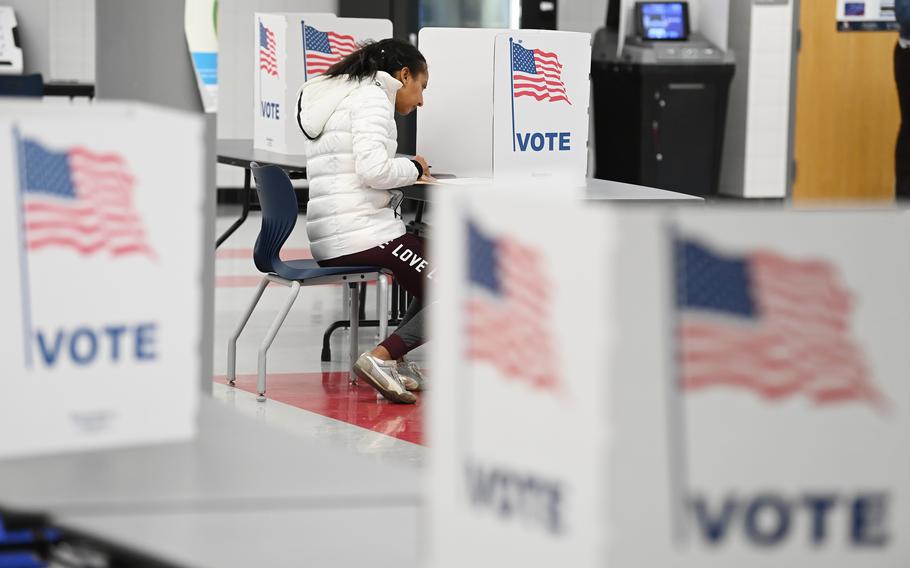 MADISON, Wis. — In the United States, election season has turned into lawsuit season.

One legal challenge in Michigan seeks to remove thousands from the voter rolls. Two lawsuits in Wisconsin seek to have more absentee ballots counted, even if they are missing some information. In Arizona, a judge is reviewing a new law requiring voters to provide proof of citizenship to register to vote. And in Pennsylvania, lawsuits challenge the state’s no-excuse absentee voting law, as well as the policy to count undated mail-in ballots.

Disputes over redistricting, voter IDs, voting hours, recounts and other election-related policies have long run parallel to political campaigns, but the numbers are rising.

The increase began after the Supreme Court decided the 2000 presidential election, and the trend reached a high in 2020, when the coronavirus pandemic prompted a host of new voting rules. The pace quickened after that election, when Donald Trump and his allies brought a slew of lawsuits that unsuccessfully sought to deliver him a second term as president.

Those battles appear to have established a new baseline for election litigation. Election experts say courts have the power to clarify vague laws or policies and resolve key questions before ballots are cast, but many also contend that the barrage of lawsuits increases the chances of last-minute rulings that can spur voter confusion.

Dozens of disputes are underway and could explode after this fall’s midterm elections because recounts are certain in close races and some Republican candidates have left open the possibility that they won’t accept the results if they lose even by sizable margins. And lawyers are already gearing up for the 2024 presidential election.

“Planning for litigation is now a key part of campaign strategy,” said Joshua Douglas, a professor of law at the University of Kentucky. “You can’t run a campaign without also having your litigation strategy set up as well.”

Over the past 20 years, the rate of election litigation has nearly tripled, according to a tally by law professor Richard L. Hasen of the University of California at Los Angeles. For the 2020 cycle, election litigation increased by more than 25 percent from the previous presidential cycle.

In 2020, political parties spent $66 million on election lawsuits, more than quadrupling the $15 million they spent in 2016, according to a review by University of Iowa law professor Derek Muller. And in the 18 months after the 2020 presidential election, the parties raised a record $121 million for litigation, he found.

In a recent law review article, Muller called for reducing litigation by making election laws more uniform and ending a policy that allows donors to give far more money to political parties if they earmark the funds for litigation.

“The notion that it’s really the lawyers rather than the voters who are sort of dictating the rules of the game I think is just a negative,” Muller said in an interview.

Some lawsuits brought by Trump allies have been based on far-fetched claims that have gone nowhere in court, but most cases have had at least some merit, Muller said. Democrats and voting rights groups are bringing lawsuits seeking to expand access to voting. Republicans and conservative organizations are filing cases that they say are intended to make sure voters and election officials strictly follow election laws.

While serving as counsel for the Republican National Committee last year, Justin Riemer described election litigation as a now-constant feature of campaigns.

Since the last midterm elections, in 2018, nearly every state has changed its election laws in some way, some restricting voting access and others expanding it. Those changes are driving some of the latest lawsuits. Republicans have a shot at taking control of the legislatures and governorships in some battleground states, which could lead to more legislation — and litigation.

More litigation is not necessarily bad, particularly if it is filed well before voting occurs, said Rebecca Green, an associate professor of law at William & Mary.

“I actually think that the more litigation before elections, the better in the sense that everybody can bring out their concerns about laws or policies or practices,” she said. “The more that that can happen before elections, the better. Let’s resolve all of those problems in the leadup to 2024 so that we all know what the rules are and those conflicts are resolved prior to the election.” 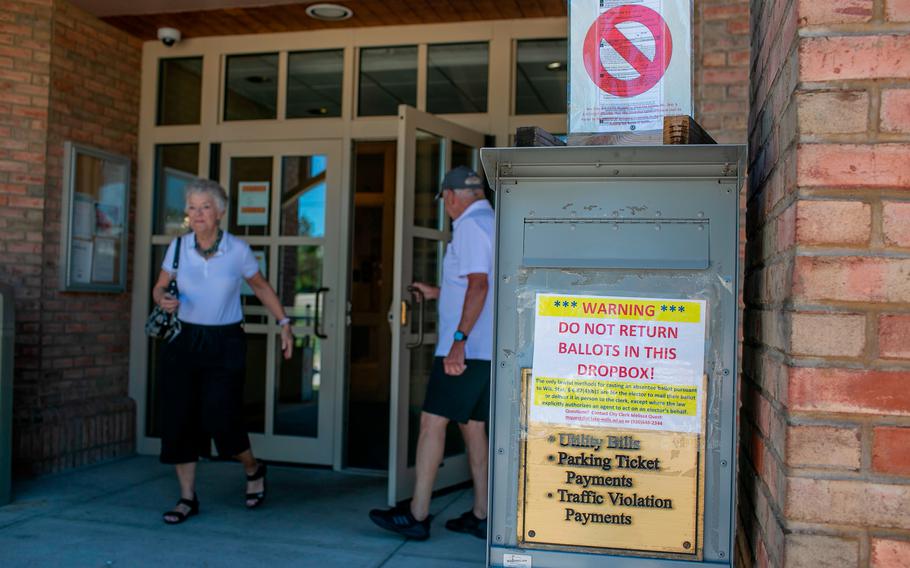 One case could have far-reaching effects. The U.S. Supreme Court will hear arguments in December over the independent state legislature theory — the idea that state lawmakers have broad authority to set voting rules and cannot be stopped by governors or state courts. The Supreme Court’s decision in the case could drastically change how election policies are set.

Many of the recent cases focus on policies that previously drew little attention; one such case in Wisconsin concerns absentee ballots that are returned to election clerks without the full addresses of witnesses. Under Wisconsin law, an absentee voter must find a witness — usually a spouse, relative or friend — to attest that the voter legally completed the ballot. The witness must sign the ballot envelope and provide an address.

Wisconsin election clerks cannot count ballots without those addresses. In 2016, the state election commission approved allowing clerks to fill in a witness address if the proper address could be determined. Often, the change was as simple as adding a Zip code or city name.

The 2016 policy for filling in addresses was put forward by Republican commissioners and adopted unanimously, but Republican lawmakers turned against it after Trump lost the state in 2020. This summer, a chapter of the Republican Party sued to block it.

A judge last month ordered the state election commission to rescind its guidance on the issue because he concluded that voters are responsible for providing the witness addresses. The ruling left it to the state’s nearly 1,900 election clerks to determine what rules to follow in their individual jurisdictions. As a result, ballots that are missing witness Zip codes are being treated differently from one community to another, with some clerks sending those ballots back to voters and others allowing them to be counted.

The situation sparked two more lawsuits — this time from groups that argued that clerks should count absentee ballots when witnesses omit parts of their addresses. Decisions in those cases could change the rules just weeks before the Nov. 8 election.

How many ballots could be affected remains unclear, but even a small number could be pivotal in a state where elections often are decided narrowly. A review by legislative auditors of about 15,000 ballots from 2020 found 7 percent were missing at least part of the witness addresses, with the vast majority of those missing the state name or Zip code.

The dispute over witness addresses could make its way to the state Supreme Court. The court has been unpredictable on election cases but won praise this summer from Republicans after it ruled 4 to 3 that absentee ballot drop boxes are not allowed under state law. A spring election for a seat on the court gives liberals their first shot at control of the court in years.

Meanwhile, in Arizona, litigation is proceeding over recent laws that require people to provide proof of citizenship to register to vote. A judge has blocked enforcement of that policy for this fall, and the case will determine what the rules are for 2024.

In Pennsylvania, the state Supreme Court in August ruled against Republicans who sought to throw out a 2019 law allowing no-excuse absentee voting. A lower court is considering another challenge to the law brought under a different legal theory.

Gregory Teufel, a lawyer who brought the ongoing challenge, said that how courts decide cases helps determine whether the public views election rules as fair.

“If the courts are viewed as politicized, favoring one party over another because of political concerns, that obviously would lead to more anger over elections,” he said. “If you get a court to settle various questions in a way that people accept was not politicized, then I’m expecting more confidence in the whole election system.”

That case is unlikely to affect voting this fall, but Teufel said he hopes to get the absentee voting law thrown out before the general election in 2024. Another lawsuit in Pennsylvania seeks to prevent the counting of undated absentee ballots.

Democratic election lawyer Marc Elias said courts will be tested in the years ahead because Republicans are increasingly raising the prospect of challenging what ballots can be counted in races they lose narrowly.

“It’s basically a post-election strategy of removal of ballots. It is culling through people whose ballots were counted and saying they shouldn’t have been counted. It is casting doubt on the accuracy of who was allowed to vote,” he said. “We haven’t seen the courts in recent times grapple with what do you do if those kinds of claims are brought.”

Democratic campaigns in several states also are preparing for the possibility that their Republican opponents will follow Trump’s strategy and reject the results of the election. A dozen Republican candidates in competitive races for governor and Senate declined last month to say whether they would accept the results of their contests, and a Washington Post analysis this month found that 291 Republicans in key races have denied or questioned the 2020 election results. Republicans often noted that Georgia gubernatorial candidate Stacey Abrams (D) did not concede after losing her bid for the office four years ago, although she did not try to overturn the certified result.

Michigan Secretary of State Jocelyn Benson (D) faces a challenge this fall from Kristina Karamo (R), who has falsely claimed that Trump won Michigan and has continued to repeat debunked theories that the election was not fair. Karamo has said she witnessed irregularities in absentee ballot processing in Detroit in 2020.

Benson, a former election law attorney, said she has lawyers at the ready to assist if Karamo doesn’t accept the election results. Karamo’s campaign did not respond to questions.

“The people who are investing in our effort and our campaign understand that in this moment, post-election work and protection of the results sometimes is part of the campaign itself,” Benson said. “And so we’ll be prepared if we need to, to raise funds for litigation or anything else that happens after the election.”