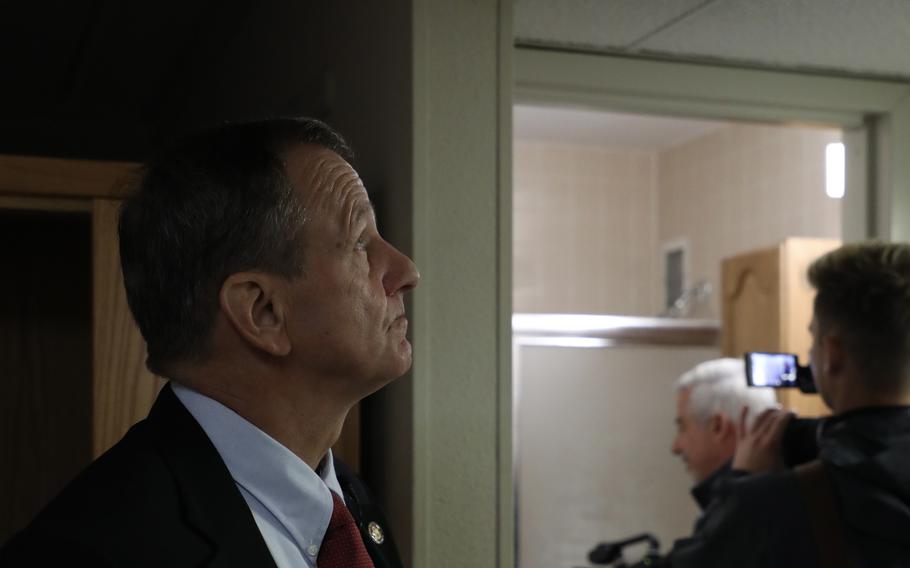 Pete Hoffman, the Civilian Aide to the Secretary of the Army for Coastal Georgia, inspects barracks at Fort Stewart, Georgia Oct. 21, 2022. Hoffman took time to visit Fort Stewart barracks to see conditions and to discuss steps that the leadership is taking to mitigate mold and improve the quality of life for Soldiers. (Aaliyah Craven/U.S. Army)

ATLANTA — Mold reports in barracks rooms at Fort Stewart skyrocketed in the weeks since thousands of the installation’s soldiers returned to the coastal Georgia Army post after a rapid deployment to Europe, forcing officials there to take a more intense look at what is causing the spike in fungus growth.

Since late July, soldiers at Fort Stewart and its smaller offshoot Hunter Army Airfield in Savannah have filed some 1,063 work orders for mold growth in barracks rooms, according to data provided by post officials. In the previous nine months, only about 120 such mold reports were filed to Fort Stewart’s Public Works directorate, the data showed.

“Instead of simply going and cleaning up the mold, now we’re assessing what was the root cause of the mold colonization or infestation, [and] we’re using … better cleaners,” McGovern, who leads Fort Stewart’s mold response teams, said Friday. “All of that, and really focusing on the education aspect of it for barracks managers, facilities managers, our mold team — getting [away from] ‘This is how we’ve always done this,’ and moving to, ‘This is how we’re going to educate people and use simple problem-solving steps to go ahead and get to the root cause and treat more than just the symptoms.’”

Mold reports flooded into DPW as thousands of soldiers from the 1st Armored Brigade Combat Team of the 3rd Infantry Division filed back to Fort Stewart beginning in early August after their near no-notice emergency deployment to Europe after Russia invaded Ukraine in late February, McGovern said. Many of those soldiers returned to rooms filled with mold, which grew unchecked in their empty rooms while they were away, he admitted.

McGovern pledged Fort Stewart officials would work harder in the future to enter unoccupied rooms — including those of soldiers deployed overseas or for training throughout the U.S. — more often to check for mold growth. Ideally, he said, someone would enter those rooms every three to four days. The installation has also begun outfitting rooms on the installation with portable dehumidifiers, placing more than 2,500 in rooms so far, he said.

Mold growth in barracks at Fort Stewart have made national headlines in recent weeks as soldiers shared photos on popular social media platforms of moldy barracks walls, ceilings and personal belongings, spurring 3rd Infantry Division officials last month to declare a mold stand-down day for several units to discuss soldiers’ moldy barracks rooms. While the issue has garnered Fort Stewart media attention, officials there said the issue was not on the scale of the moldy barracks at Fort Bragg, N.C., where officials made a sudden decision in the summer to condemn 13 aging barracks buildings and to move the roughly 1,200 soldiers living in them.

Barracks issues have the attention of the service’s top leaders, Army Sec. Christine Wormuth has insisted multiple times in recent weeks. She pledged last month to boost the Army’s about $1 billion annual barracks budget for new construction, renovations and annual upkeep, admitting the service had underinvested in its barracks for years.

This month, Wormuth ordered Army-wide inspections of all its barracks and offices spaces worldwide for problems including mold. Fort Stewart officials have begun preparations to carry out Wormuth’s orders, said Lt. Col. Matt Fontaine, a spokesman for the Army’s 3rd Infantry Division, which is headquartered at Fort Stewart.

On Friday, Peter Hoffman, the civilian aid to the Army secretary for coastal Georgia, toured one of Fort Stewart’s barracks where mold problems have been reported. Hoffman, a retired Army colonel, said he was pleased with the mold response efforts that he saw Friday and would report to Wormuth with his observations and recommendations.

“It's not an easy solution. It's not an easy fix,” Hoffman told reporters after visiting the barracks. “We have old barracks, we have weather here in this region that would lead to mold growth. And so it has to be taken care of in a number of ways, and [I] saw today that, that is just what's happening here.”

Fort Bragg completed its efforts last week to remove the 1,200 soldiers formerly living in its condemned 1970s-era Smoke Bomb Hill barracks, which will now be torn down or refurbished during the coming years. However, Fort Stewart has not moved any soldiers out of any mold-infested rooms on post, Fontaine said Friday.

Like Fort Bragg, most of Fort Stewart’s mold problems have occurred in 1970s-era buildings known as Volunteer Army barracks, or VOLAR, which included dated designs and infrastructure that do not meet current service building standards. Those VOLAR buildings on Fort Stewart are scheduled to be renovated during the next decade, according to Col. Manny Ramirez, Fort Stewart’s garrison commander. Installation officials have also sought additional funds in the coming years to build new barracks buildings, Ramirez said.

Since the Sept. 12 mold stand down, DPW mold teams have found 667 cases in barracks rooms, remedied 515, and 152 cases remain open, according to the Fort Stewart data. Fort Stewart and Hunter Army Airfield have about 6,700 barracks rooms, of which about 5,700 are occupied, Fontaine said.

McGovern said most Level 1 growth can be handled by soldiers, who have been given brief courses on mold remediation, which advises the use of hydrogen peroxide to kill small amounts of mold. In all, Fort Stewart has identified 10 cases of Level 3 growths in barracks rooms, which have all occurred in empty rooms, he said.

“It’s a very small population that gets to the [Level 3],” McGovern said. “We've been very fortunate. We have not had an occupied room get up to that Level 3 — they’ve all been unoccupied rooms. It’s important we get into those unoccupied rooms to see [because] if they’re left unattended, they will probably be a Level 1, 2, 3 fairly quickly.”

The key is to stop mold growth as quickly as possible and fix any infrastructure or other problems that contribute, like leaky pipes or problems with heating, air conditioning and ventilation systems, he said.

Hoffman said his visit Friday alleviated some concerns that he had developed since Fort Stewart mold issues began making headlines last month, noting the Army had been dealing with such problems since he entered the service in the 1990s. He expressed confidence in leaderships’ response to the issue and endorsed officials’ pledges to find long-term solutions to moldy barracks rooms.

“Walking through the barracks, it's clear that we probably underinvested in our barracks over a long period of time, and that's being addressed over the coming years — there's going to be a lot more investment, significant investment in fixing the barracks, but that's not going to happen overnight,” Hoffman said. “And in the meantime, everything that [I] saw today is going to help make sure the soldiers are taken care of and living in a safe and healthy environment.”