Soldiers at Fort Stewart, Ga., expressed concerns about their living conditions and posted images of mold in rooms on social media. That resulted in inspections, such as this one in September. (Jason Hull/U.S. Army)

KAISERSLAUTERN, Germany — All Army barracks and family housing units in Europe will be checked for mold as part of the service’s effort to eliminate substandard living conditions worldwide.

“Unit leadership will physically inspect all barracks rooms, focusing on mold and assessing any other health, safety or functionality issues that required immediate correction,” Capt. Aaron Smith, a spokesman for U.S. Army Europe and Africa, said Friday in a statement.

A USAREUR-AF spokeswoman confirmed Monday that family housing at Army bases in Europe also will be inspected.

The Army in Europe will have a lot of ground to cover when inspections begin. The review will include 10,000 Army family housing units, 15,000 barracks spaces and about 7,500 other buildings, Smith said Monday.

Unit leaders will work with garrison commanders, housing officials and facility managers to determine inspection times, he said. Soldiers and families will then be notified, Smith added.

The directive comes on the heels of the relocation of more than 1,000 soldiers at Fort Bragg, N.C., due to mold-infested barracks this fall.

Base leaders at Fort Bragg announced in August that about a dozen buildings no longer met standards for heating, ventilation and air conditioning because of mold growth in rooms.

Mold problems also have been reported at Fort Stewart in Georgia and Fort Meade in Maryland.

The inspections in Europe will look at structural conditions of walls, ceilings and doors, Smith said. Electrical and plumbing systems also will be assessed, as will environmental issues such as temperature, insects, mold and mildew. 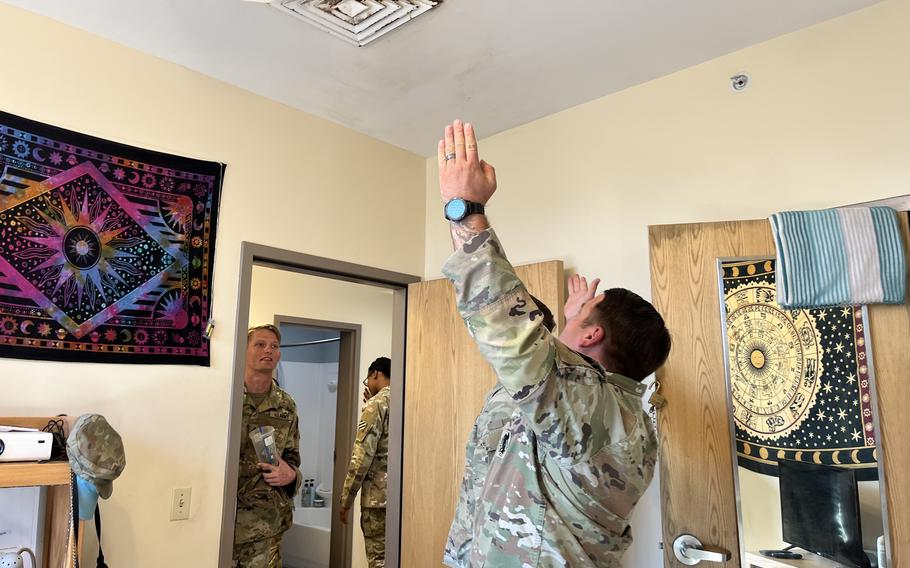 Tenants will be able to share their concerns during interviews and Army leaders will use the findings to prioritize spending on improvements, he said.

In Europe, “mold-related issues do not comprise a significant percentage of the concerns that our residents bring to our attention,” Smith said.

On-base housing in Europe, however, tends to be older than units provided by Army installations stateside.

And soldiers and their families tend to be less satisfied with base housing in Europe, as results from the annual Army housing survey released this year showed.

Out of 20 Army domestic and overseas installations with housing managed by the government, the bottom four in overall satisfaction were in Germany.

The lowest, Ansbach and Stuttgart, were rated as poor, signifying “substandard performance and strong displeasure” with the property and/or level of service.

Army leaders in Europe at the time said hundreds of millions of dollars in housing improvements and new units are slated for Europe bases over the next six years.

Reviews of Army Reserve and National Guard buildings are expected to be included in a separate inspection order, USA Today reported.