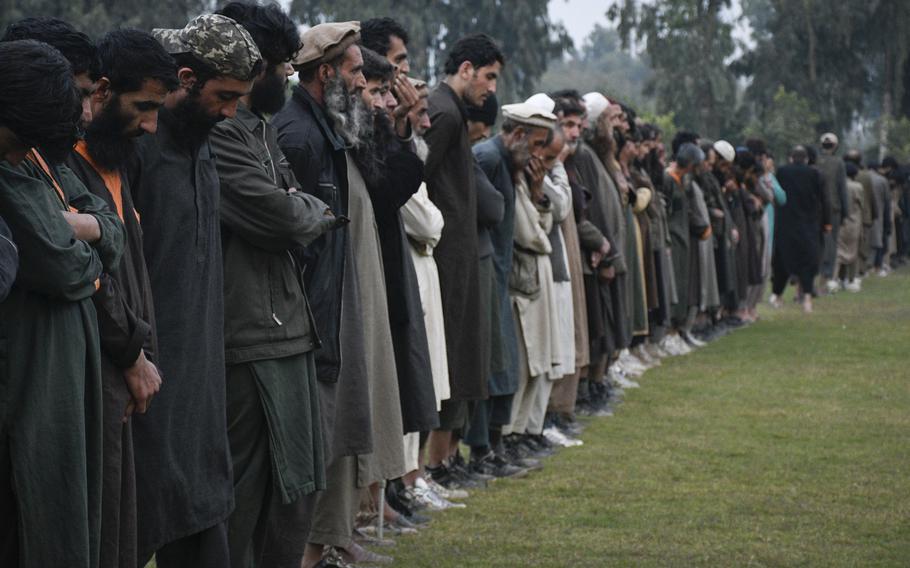 Islamic State fighters line up in Jalalabad, Afghanistan, in 2019 after surrendering to the Afghan government. In a criminal complaint filed Oct. 17, 2022, federal prosecutors accused a man hired by the U.S. military to be a translator in Afghanistan of lying about his contacts with the Islamic State terrorist group. (J.P. Lawrence/Stars and Stripes)

An American citizen who was hired by the U.S. military to be a translator in Afghanistan has been charged in federal court with lying about his contacts with the Islamic State terrorist group.

Mohammad Rafi Mohammadi, of Kansas City, Kan., sent money to one Islamic State recruiter and sought to secure the release of another, according to a criminal complaint filed Monday in Kansas.

He faces one count of making a false statement, a felony that carries a sentence of up to five years in prison.

During a security check prior to his deployment to Afghanistan as a Defense Department contract linguist in 2019, Mohammadi hid contacts with the terrorist group’s Afghanistan affiliate, known as ISIS-K, court filings state.

Prosecuting someone for lying on a security clearance form is rare, experts told Rolling Stone magazine, which first covered the case.

Tim Burdick, a public defender representing Mohammadi, told Stars and Stripes that his client had served the U.S. military “for several years.”

“We look forward to the opportunity to present his defense,” Burdick said.

The U.S. Attorney’s Office – District of Kansas when reached for comment declined to speak on a pending case.

The Islamic State in Afghanistan, an offshoot of the terrorist organization in Iraq and Syria, has launched deadly attacks throughout the country since its founding in 2015.

Its most infamous bombing occurred last year at the Kabul airport during the mass evacuation after the U.S.-backed government fell to the Taliban. The attack killed 13 U.S. troops and 170 Afghan civilians.

The criminal complaint did not name the two Islamic State recruiters allegedly connected to Mohammadi, calling them Individual No. 1 and Individual No. 2.

The unidentified individuals could be Abu Obaidullah Mutawakil and Mubasher Muslimya, who were arrested in Kabul in 2019, Rolling Stone said.

FBI investigators said they have Facebook messages showing that Mohammadi asked a friend in 2018 for the phone number of Individual No. 1 and arranged to send $400 to him.

Individual No. 1 was arrested by the spy agency of the U.S.-backed former Afghan government in 2019 on suspicion of recruiting militants for ISIS-K, the court filing said.

The criminal complaint did not elaborate on Mohammadi’s his work as a translator, other than to say that he had once attempted to sneak back onto base after leaving without permission.

In the fall of 2021, Mohammadi allegedly told an FBI informant that while deployed to Afghanistan, he tried to facilitate the release of Individual No. 2.

Mohammadi also posted videos of both men on his Facebook page, an FBI agent cited in court documents said.

Last week, Mohammadi told federal agents that he did not send money to an Islamic State recruiter and did not personally know him, according to court filings.