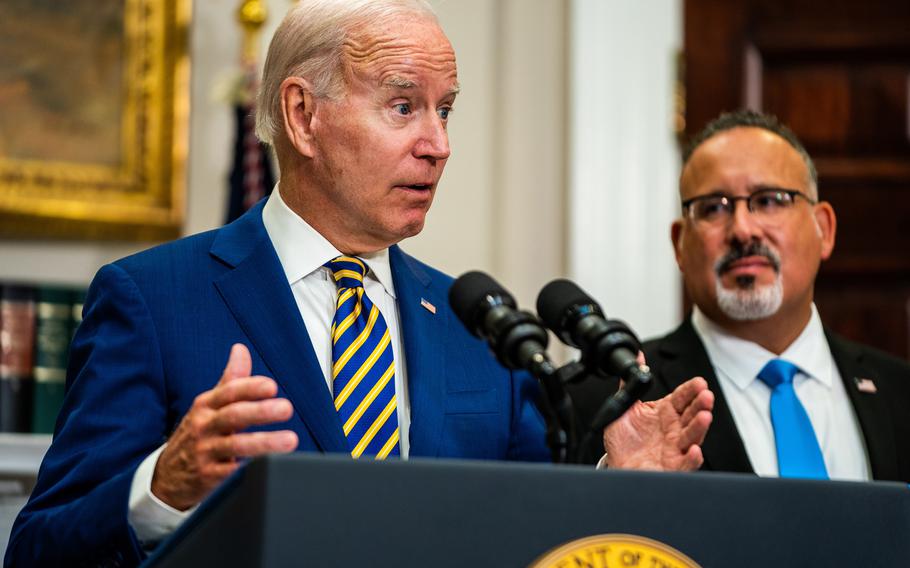 The Biden administration on Tuesday gave an early look at the application form for the president's plan to forgive up to $20,000 in federal loan debt for student borrowers.

The administration had previously said that the application would be short and that borrowers would not be required to provide documents or a federal student identification number.

The application will require borrowers to give their Social Security numbers and attest that they earned less than the income caps set for relief. The forgiveness is limited to borrowers who earned less than $125,000 in 2020 or 2021, or less than $250,000 for married couples. Nearly 95 percent of borrowers with federal student loans meet the income requirement for the program and qualify for relief, according to the White House.

Applicants will also need to certify that the information they submit is correct. Anyone who submits false information could be subject to penalties including fines or imprisonment.

Applications will be reviewed by the Education Department's Federal Student Aid office and matched with borrowers' federal records to confirm eligibility. People will not be able to benefit from the relief program unless they have a federal student loan on file with the department. The federal agency will contact individuals directly if they need more information to verify income or eligibility, the White House said.

On Tuesday, the White House also said the form will be available in English and Spanish. People will be able to fill out the form on mobile and desktop devices, giving those who don't have access to computers a chance to apply, the White House said. A paper form will also be available during the application period, which will open later this month and run through the end of 2023.

The Biden administration is encouraging eligible borrowers to rely on the Education Department and its Federal Student Aid office for information about when the application period opens.

Still, it remains unclear exactly when the application will be released.

The Biden administration had originally said it hoped to make the form available in early October, but the release has been delayed as the forgiveness plan faces multiple legal challenges.

On Wednesday, a federal judge in Missouri is expected to hold a hearing in a lawsuit filed by six Republican-led states seeking to halt the forgiveness program. The lawsuit alleges the Biden administration has exceeded its authority in creating the forgiveness program and that it could result in less revenue for states or loan servicers that operate there.

The administration has been adamant that a 2003 law gives it authority to forgive the debts.

President Biden announced in August that the administration would forgive up to $20,000 in federal student loans for borrowers who received Pell Grants and up to $10,000 for other people with federal student debt within the set income limits.