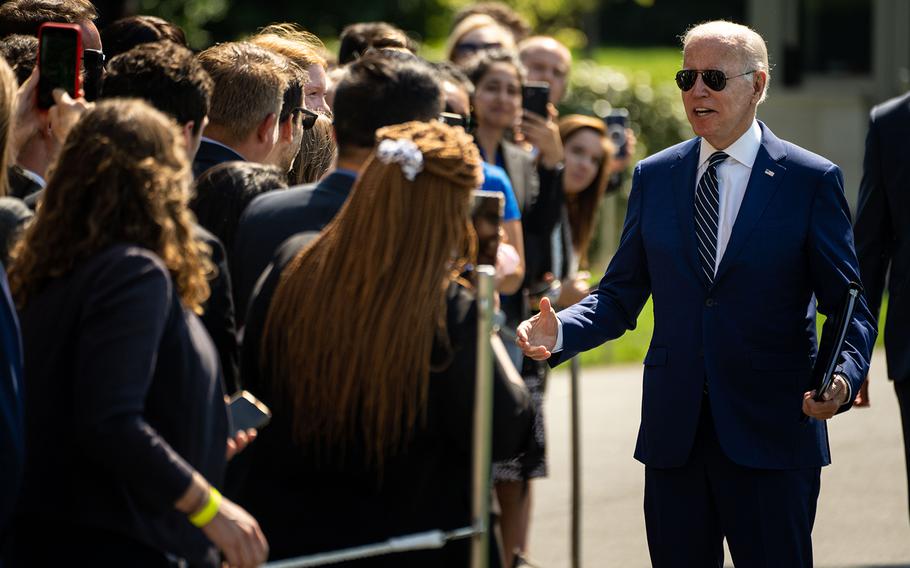 President Joe Biden greets guests after disembarking from Marine One on the South Lawn of the White House on Wednesday, Aug. 24, 2022, in Washington, DC. (Kent Nishimura/Los Angeles Times/TNS)

(Tribune News Service) — President Joe Biden’s plan to forgive a portion of student loans held by tens of millions of people will ripple through the economy as personal spending and savings shift, but no factor will be more closely watched than inflation.

In announcing the plan Wednesday, the White House flagged that the move would have competing impacts. On the one hand, it would reduce overall household debt and potentially provide more spending power. On the other, it offers a timeline to restart payments that have been suspended for more than two years.

Overall, the combination of higher savings and lower debt could drive inflation up by 0.1 to 0.3 percentage points, according to Michael Pugliese, an economist at Wells Fargo & Co. Bloomberg Economics sees the potential to add as much 0.2 percentage points next year, with risk to the upside. Headline inflation last month, as measured by the consumer price index, was 8.5%, near a 40-year high.

“In the grand scheme of things, that’s not huge,” Pugliese said of the fresh pressures, adding that there are outstanding details that will still influence his estimate. “But inflation right now is at pretty alarming rates. At a time when the economy is already running too hot, it just threatens putting more fuel on the fire.”

While Biden and the Democrats are using the debt relief to court younger and progressive voters ahead of the midterms in November, as the party risks losing control of Congress, the decision has also powered criticism that his administration is to blame for a consumer-powered surge in prices, particularly from the $1.9 trillion COVID-19 relief stimulus bill.

The effects of the relief will be felt widely. Of the 43 million federal student loan borrowers eligible to benefit, about 20 million will have their debt completely eliminated, according to White House estimates, with 90% of help going to those who earn less than $75,000 a year.

The loan forgiveness will likely counter any deflationary impact from the recently passed Inflation Reduction Act, Beth Akers, a senior fellow at the American Enterprise Institute, said on Bloomberg Radio’s Balance of Power.

“It’s actually not hugely inflationary,” said Akers, a former staff economist in the Council of Economic Advisers under George W. Bush. “This will increase the inflationary pressure, but it’s still not a game changer in terms of the inflation debate.”

The Committee for a Responsible Federal Budget, a fiscally conservative group that lobbies for deficit reduction, also flagged that the debt relief could undermine the IRA’s disinflationary impact. It said Biden’s plan will likely cost up to $600 billion, and could add 0.15 percentage points to the Federal Reserve’s preferred inflation gauge upfront, with additional pressure over time.

The bigger drivers for consumer prices in the coming months will remain “the interplay between the strong labor market and rising interest rates,” said Blerina Uruci, U.S. economist at T. Rowe Price Associates. “At the margin the loan forgiveness will help a subset of the U.S. consumer.”

As for the broader impact on the economy, the extended pause on repayments and overall lightened debt load will support consumption, but “it still comes down to how eager people will be to spend in the current environment of high inflation and rising interest rates,” said Sal Guatieri, senior economist at BMO Capital Markets. “The actions will temper the downside risks to the U.S. economic outlook.”

While Biden’s plan to forgive a portion of student loans will reduce the burden for millions of households, it also pegs January as the end to the forbearance period. This means that millions of debt holders with more than $10,000 of loans or income levels outside of the government plan’s parameters will have to resume payments for the first time since March 2020, leaving less leftover for discretionary spending.

Student loan debt exceeds $1.7 trillion, according to the Fed, and is second only to mortgage balances as the largest component of U.S. household debt.

Biden stressed that the plan is targeted toward working and middle class households. The $10,000 in debt relief for most student-loan holders will be doubled for those who received Pell Grants. More than 90% of those grants have gone to families with incomes less than $60,000 a year.

The loan forgiveness will have more of a long-term effect on household wealth, rather than an immediate effect on spending, said economist Arin Dube, professor at the University of Massachusetts Amherst. School debt often restrains first-time homebuyers, so eliminating the debt could free up spending in the future, he said.

“There are solid reasons to oppose the policy or support the policy,” he said. “But inflation to me is not a big part of the issue. This is transfer of debt from private to government essentially, and this is going to be spread out.”