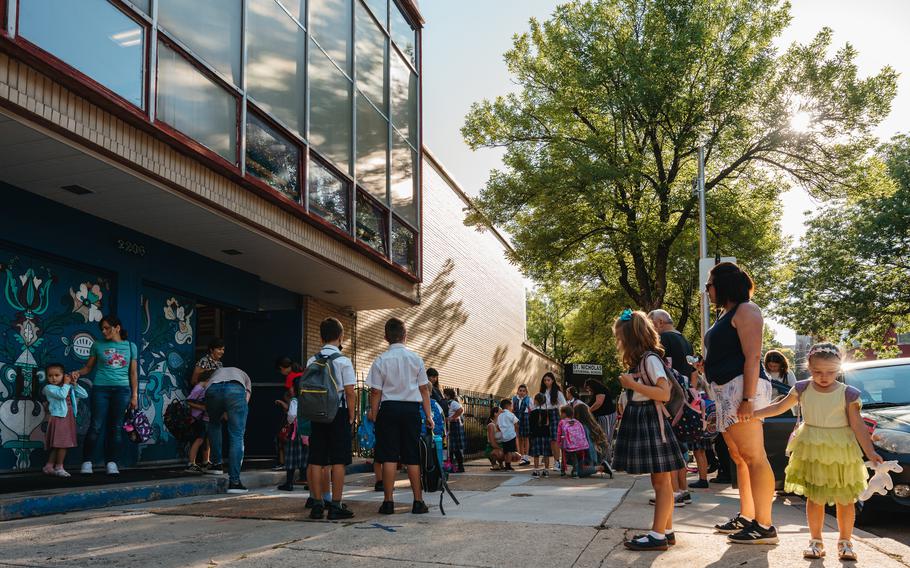 CHICAGO — Principal Anna Cirilli remembers the first Ukrainian refugee who showed up at her school, a week after Russia invaded Ukraine. The 13-year-old had come with his mother straight from the airport to the front door of St. Nicholas Cathedral School.

The boy, Dmytro, had previously attended St. Nicholas but returned to Ukraine to study the Sopilka, a Ukrainian flute, Cirilli said. But when war broke out in February, Dmytro and his mother fled to the United States. And they knew exactly where they wanted to be.

“They came right from the airport [and] only had a suitcase each,” Cirilli told The Washington Post. “Mom was like, ‘I need to go find a place to live. Can I please drop him off?’ “ School staffers hustled to the Ukrainian bakery around the corner to get breakfast for him and the class.

Eight months into the war, St. Nick has become a hub for displaced students, and with good reason. Roughly 80% of students at St. Nick are of Ukrainian descent, and nearly a fifth are natives of Ukraine. Several teachers and school staff speak Ukrainian, as do many of the students, who help translate for their new peers. The school has also added language aides and counselors who help support the new students through their trauma.

Riumin Dmytro and Iullia Zamota fled Ukraine in April with their 4-year-old son, Ilya, who now attends St. Nick. Dmytro, who runs an e-commerce business with his wife, was once skeptical that war would come to Ukraine. But when Russia invaded in late February, he knew they couldn’t stay. Students demonstrate a traditional Ukrainian dance they learned for a festival in the summer. (Jamie Kelter Davis/for The Washington Post) 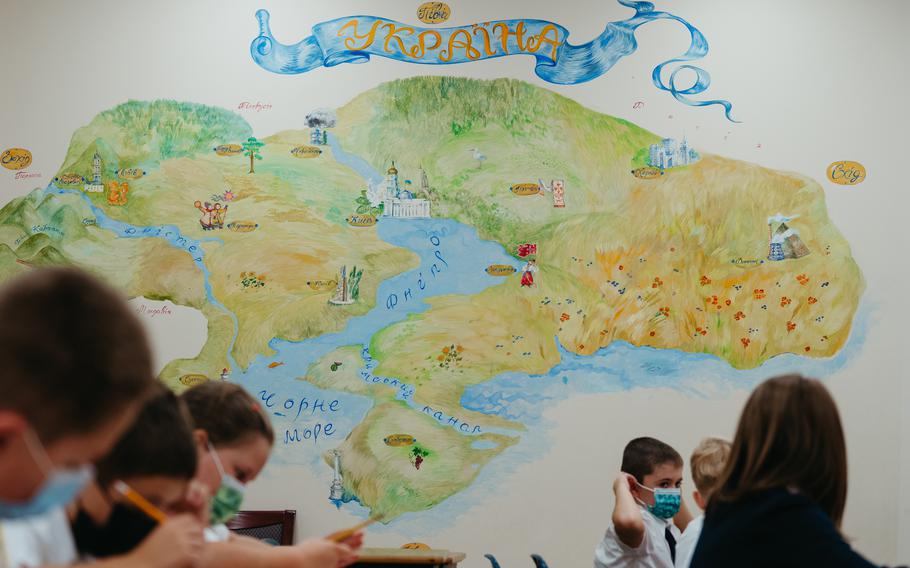 A map of Ukraine decorates a classroom. (Jamie Kelter Davis/for The Washington Post) 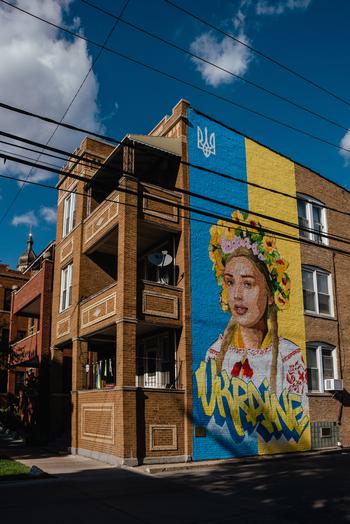 A large mural of a Ukrainian woman is painted on the side of an apartment building in Chicago's Ukrainian Village. (Jamie Kelter Davis/for The Washington Post) “Every 15 minutes, more people were filing out,” he said. “What do you take with you when you’re leaving your whole life?”

His family moved west to Lviv before crossing into Poland and then traveling to Mexico and then the United States. Ilya crossed the Atlantic with 15 soft toys and a carrier specially made to carry his Hot Wheels toy car.

In America, the family moved from San Diego to Chicago, which offered discounted hotel rooms for the displaced.

After a week in a hotel, Dmytro said the family was invited to stay with a Polish family for a few days as they navigated the challenge of finding housing and jobs. One night, exhausted, Dmytro took an Uber to look at apartments and discovered his driver, Volodymyr (“like the president!” he said) was also Ukrainian.

“He drove me around for free,” Dmytro said. When the Polish family found a landlord on Facebook in Ukrainian Village, Volodymyr co-signed for Dmytro’s lease. “It was a miracle,” he said.

At St. Nick, Ilya attends school with other children who endured similar treks. Alina Pakhomova came with her 10-year-old son, David, and 7-year-old daughter, Kira. The children, like other refugees, have received free tuition and school supplies and clothing from the stocks organized by St. Nick.

Cirilli said the school tries to support the families best they can, but she understands how trauma can linger. When a tornado touched down over the summer, prompting sirens, Pakhomova recalled how scared David got, worried they would have to pack up and leave again.

“Why did we go from one war to another?” he asked her. 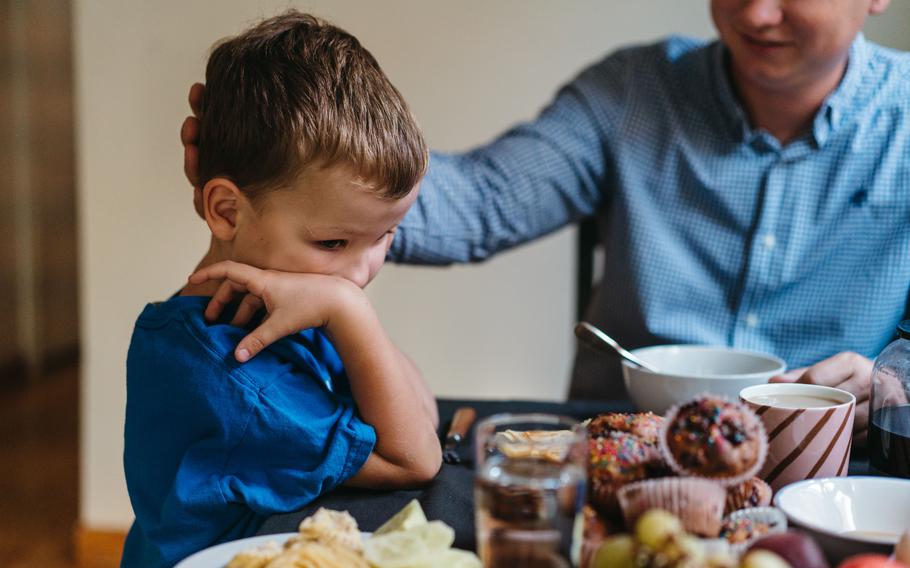 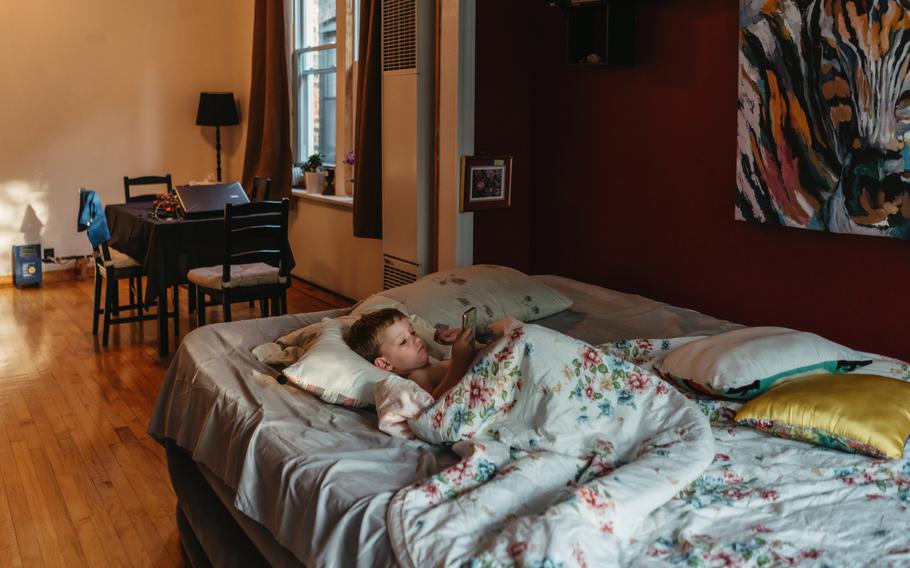 Ilya Dmytro, 4, lays in bed and watches cartoons on a phone in his family's apartment. (Jamie Kelter Davis/for The Washington Post)

Dmytro said his son, Ilya, has similar pangs for home — “he thinks our old apartment and car are still waiting for us in Kyiv” - but increasingly he feels settled in Chicago.

Ilya “skips breakfast just to go to school,” Dmytro said. “He loves the kids. And the friends and teachers understand what is going on. But it is sad — to hear 5- and 6-year-olds talking about Kyiv and bombs.”

Cirilli said the school is currently hosting 75 refugees, many of whom left Ukraine with the barest of necessities.

Dasha Diachenko, who works in public relations and did so in Ukraine, lends her skills to St. Nick’s as a volunteer where she fundraising and outreach efforts to support scholarships and wish lists for new students.

So far, most of the donations have come from the community. A local Catholic school stepped up with a student-led “out of uniform” fundraiser, while another did a gift card drive. But as the war drags on, Cirilli wonders how long the school can financially sustain its efforts.

Many families that fled the war in Ukraine could bring only a backpack with them, and arrived in the United States with very few personal belongings. The school has organized donation drives for supplies and clothing for families in need.

“I know we’re getting support now, but I know come January it’s going to be different, Cirilli said.

“And we’re still taking in kids as they come,” she added. “You know, the doorbell is still ringing.”

As Cirilli and Diachenko walk the hallways toward the end of the school day, they point out the tall 13-year-old boy who was the first to arrive at St. Nick this spring. For a moment, even as banners alluding to the war hang in the background, the stress and anxiety melt away. The boy, in the middle of a basketball game with his peers, spots the two women out of the corner of his eye, and gives them a happy wave. The school gymnasium is filled with signs of support for Ukraine. (Jamie Kelter Davis/for The Washington Post) 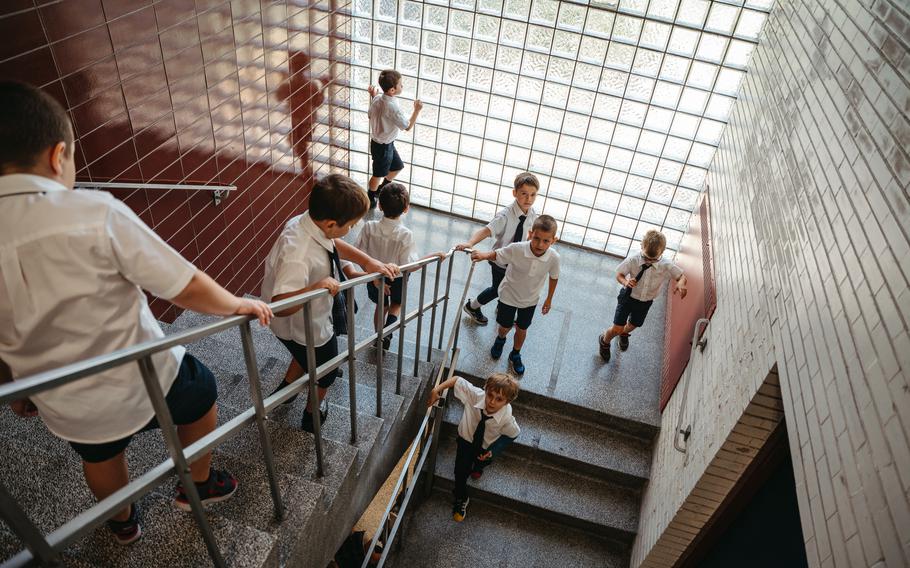 Kira wears a bracelet with the colors of the Ukrainian flag that she made this summer at St. Nicholas Cathedral School. (Jamie Kelter Davis/for The Washington Post)