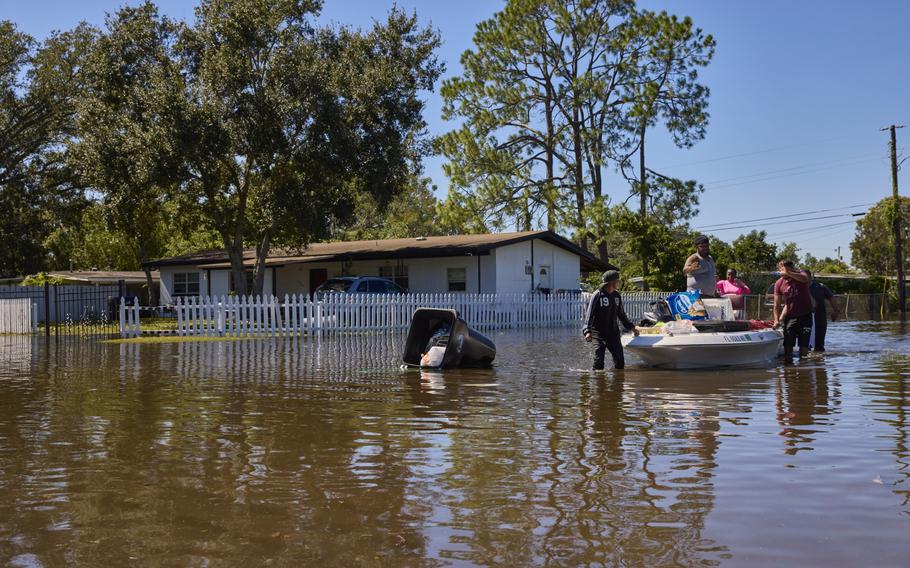 Climate change made Hurricane Ian's most extreme rainfall about 10% worse than it would have been without two centuries of greenhouse gas pollution, according to a first-take analysis of the storm by two U.S. climate researchers. Their rapid analysis, which they shared on Twitter, looked only at rainfall, and not other critical climate metrics related to hurricanes, such as strength, intensification and sea-level rise.

Ian has devastated the state of Florida, with severe flooding among the impacts. President Joe Biden said it is likely to rank among the most destructive storms in U.S. history, and the full death toll will likely not be known for weeks. Damage estimates range from $68 billion to $100 billion.

To arrive at their finding, Michael Wehner of the Lawrence Berkeley National Laboratory and Kevin Reed of Stony Brook University relied on what they call a "storyline" approach. That involves using a publicly available model to replay the storm. Then they're able to remove the effects of climate change "using sort of a 'cookbook' from existing studies," said Wehner. With the effects of greenhouse gas pollution subtracted out, they re-run the simulation to develop a sense of "the world that might have been had there not been climate change," he said.

The difference between the two simulations yields the final estimate: that Ian was about 10% wetter because of climate change.

Reed and Wehner used the same method in research published in a peer-reviewed journal in April with a third colleague, Colin Zarzycki of Penn State University.

Wehner said the quick look at Hurricane Ian turned out to be "a little more interesting" scientifically than he had expected. The reason lies in a discovery made in part by a French engineer, Benoît Clapeyron, in the 1830s. While trying to improve steam engines, Clapeyron figured out something interesting about air and water: For every degree Celsius rise in temperature, air seemed like it was able to hold about 7% more water vapor. This is now known as the Clausius-Clapeyron equation.

What's true for steam engines is also true in the global atmosphere. Nearly two centuries later, that same phenomenon allows scientists to estimate how much rainier greenhouse gas emissions have made tropical cyclones. With more than 1°C of global warming already behind us, the atmosphere can hold at least 7% more water.

But why would rainfall come down 10% harder if the amount of moisture added to the atmosphere is less than that? Plus, the air off Florida itself has warmed less than 1°C, Wehner says. That means 10% is closer to two times the humidity that climate change has contributed to the state. So there's something else going on to intensify hurricane rainfall, Wehner says, perhaps having to do with higher wind speeds.

Not just Ian but other recent storms have dropped more rain than the increased moisture in the atmosphere indicates they should have. Why that's the case is the subject of continuing research.

Wehner says Hurricane Harvey's extreme rainfall in 2017 first signaled that cyclones could kick out additional rain at a rate much faster than the atmospheric moisture increase predicted by Clausius-Clapeyron. Climate change, according to studies, might have increased Harvey's rainfall by 19% to 24% over expectations from the preindustrial era.

The April study that was the starting point for the new analysis looked at the historically anomalous 2020 North Atlantic hurricane season, which saw 30 named storms, more than twice the seasonal average. Twelve of them hit the U.S., causing more than $40 billion in damage. The scientists found that three-hour maximum hurricane rainfall was 11% higher than it would have been in the preindustrial world, and maximum three-day accumulated rainfall was 8% higher.