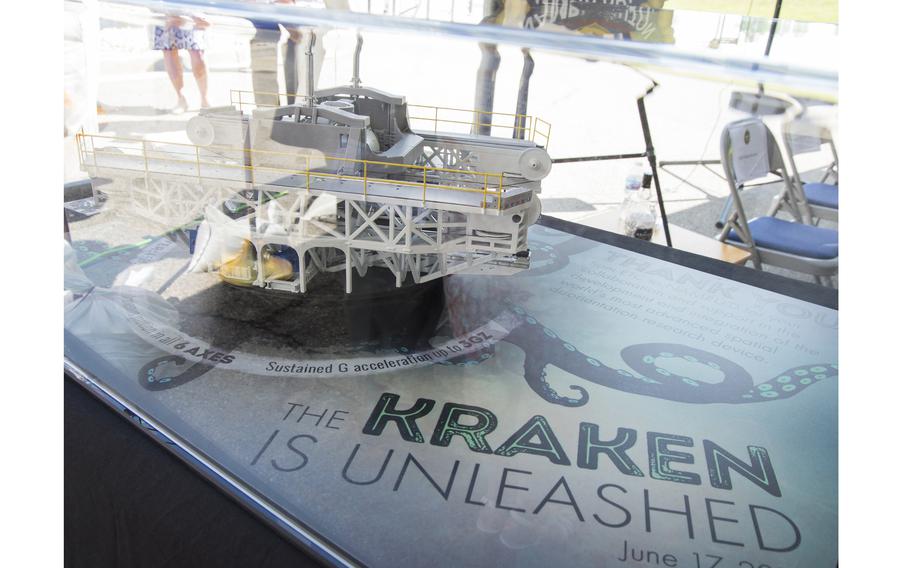 (Tribune News Service) — NASA researchers and possibly astronauts will visit Wright-Patterson Air Force Base as they prepare to return to the moon.

Richard Arnold, director of the Naval Aerospace Medical Research Laboratory at Wright-Patterson, said NASA researchers will visit his lab as early as Tuesday to begin work exploring the effects of disorientation and other physical demands on pilots and astronauts.

The agreement — signed just 10 days ago — is with the NASA Johnson Research Center’s human research program, to explore the effects of acceleration and motion, primarily involving gravity and “g-force transitions,” Arnold said.

Some of the work will involve the “Kraken,” the six-axis of motion disorientation device at the Captain Ashton Graybiel Acceleration Research Facility at Wright-Patterson. The $19 million GL-6000 Disorientation Research Device — known as the Kraken — was unveiled in 2016.

Rather than the normal “1G” that we all experience on Earth, pilots and astronauts face keen physiological challenges as their vehicles push to escape gravity. The research will also look at the imperative to control vehicles, like the new lunar lander, during those stresses.

“We’re very excited to be involved in our small way in working with NASA on those efforts,” Arnold said in an interview Monday.

The Kraken is distinct from the “RAC,” or Research Altitude Chambers, owned by the Air Force Research Laboratory near the Naval Medical Research Unit on the base. The RAC was first unveiled in the spring of 2021, giving Air Force and private-sector researchers insights into the stresses of high altitude, strong acceleration or disorientation.

“This is involving our big device, which is the Kraken,” Arnold said. “It’s quite the wild ride.”

At the Ohio Space Forum in May, retired Army Col. and current NASA astronaut Doug Wheelock first publicly said astronauts may train on an AFRL “disorientation room” or “disorientation device.” He specifically called out AFRL in his public remarks, but it wasn’t immediately clear what device he was referring to.

Arnold said Monday that astronauts may eventually visit the base as part of the work. “Right now, the agreement we have is strictly a research collaboration agreement,” he said, adding, “I suspect they will be involved going forward.”

The NASA Artemis timeline is constantly shifting. The plan was to launch Artemis I — an uncrewed mission to the moon and back — this summer.

That effort has been pushed back after NASA experienced problems getting rocket engines to the correct operating temperatures in previous launch attempts in late August and early September. The next Artemis 1 launch attempt is slated for no earlier than Oct. 2.

Following Artemis I, NASA’s plan was to launch Artemis II, a crewed flight, around the moon and back, in 2024, NASA Glenn public affairs officer Jimi Russell told the Dayton Daily News in May.

That will be followed by the hoped-for moon landing in early 2025 with Artemis III — America’s first since December 1972.

He added: “This has been discussed, but not confirmed.”