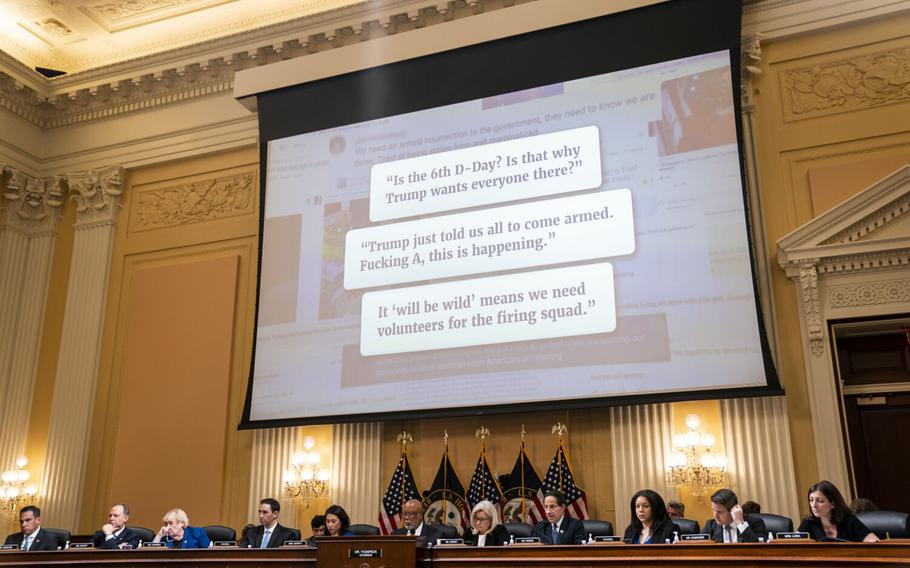 Messages are displayed on screen during a House Select Committee to Investigate the Jan. 6 hearing in the Cannon House Office Building on Tuesday, July 12, 2022, in Washington, D.C. (Kent Nishimura, Los Angeles Times/TNS)

WASHINGTON (Tribune News Service) — The congressional committee investigating the Jan. 6 attack on the U.S. Capitol and former President Donald Trump’s efforts to undo the 2020 election is seeking new evidence, just days before the next public hearing and as lawmakers push to complete an interim report next month.

A lawsuit filed over the weekend revealed that Robin Vos, the speaker of the Wisconsin Assembly, received a subpoena on Saturday to testify before the committee. Lawmakers expressed interest in a July phone call when Trump reportedly urged Vos to move to decertify President Joe Biden’s win in the state — a sign that the committee is exploring the timeline of Trump’s attempts to interfere with the election long after the events surrounding Jan. 6.

The subpoena called for Vos to appear for a deposition in-person or by video on Monday morning. The committee postponed the Monday deposition date, according to people familiar with the matter, who weren’t authorized to speak publicly. In the past, deposition dates in subpoenas from the committee have served as a jumping off point for negotiations.

The committee’s next public hearing is set for Wednesday.

“In short, the committee is demanding Speaker Vos appear for a deposition to answer questions irrelevant to the committee’s investigation, with virtually no notice, in the closing days of his reelection campaign, merely because of the committee’s public relations scheme,” Vos’ lawyers argued in the complaint, filed in the U.S. District Court for the Eastern District of Wisconsin.

The committee’s last round of public hearings featured explosive testimony from more than 20 key witnesses, including former White House and Justice Department officials. Committee members indicated they would continue to gather evidence, announcing earlier this month that they’d asked former House Speaker Newt Gingrich to voluntarily testify. Virginia “Ginni” Thomas, the wife of Supreme Court Justice Clarence Thomas, agreed last week to sit down for an interview with the committee, according to her lawyer.

Legal fights over other subpoenas are pending in federal court — including one involving Trump’s former chief of staff Mark Meadows — and it’s unclear if those can be resolved by the end of the year, when the committee is expected to publish a final report.

The latest subpoena stemmed from a report that Vos had told WISN, a local ABC affiliate, in July that Trump called him after the Wisconsin Supreme Court ruled 4-3 that absentee voters couldn’t use drop boxes to submit ballots in future elections. Vos said that Trump had urged state Republicans to decertify the 2020 election results based on the court’s decision, and that Vos had replied that wasn’t allowed under the state constitution. The ruling was forward-looking and didn’t invalidate absentee ballots cast via drop boxes in the 2020 election. There has been no evidence of widespread voter fraud in Wisconsin or other states.

Trump publicly criticized Vos on his Truth Social platform, posting on July 13 that Vos was “a long time professional RINO” — standing for “Republican in name only” — who would be “doing nothing about the amazing Wisconsin Supreme Court decision.” Trump endorsed a Republican challenger for Vos’ seat, but Vos won the primary last month.

Any bad blood between Vos and Trump aside, Vos’ lawsuit made clear he’s not willing to give the committee what it wants, at least not without a fight. His lawyers are arguing that the July call between Vos and Trump is beyond the scope of what the committee is authorized to investigate and that the last-minute subpoena placed an “undue burden” on Vos and violated immunity he’s entitled to as a state legislator.

“Put simply, the committee views itself as having a roving commission to examine any matter involving its political adversaries that piques its interest without any regard for the rights of the citizens subjected to its investigation,” the lawsuit reads. “The court must quash this subpoena and remind the committee that it, like all other government entities, is subject to limitations on its powers.”