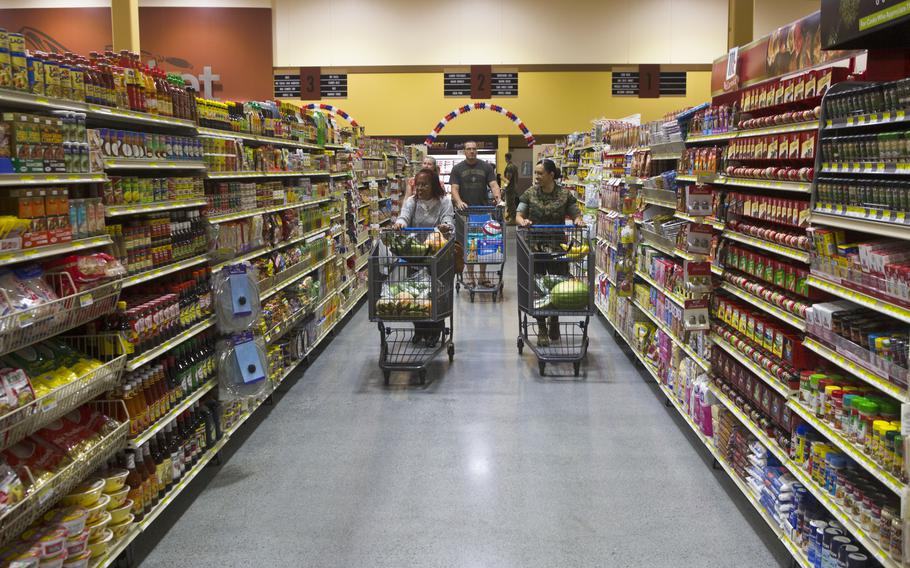 Correction: A new plan for commissary funding announced in a memorandum from Defense Secretary Lloyd Austin on Sept. 22 aims to reduce the price of food items in commissaries by 3% to 5%. The Pentagon initially provided an incorrect savings percentage that was included in a previous version of this story.

Thousands of U.S. service members will soon see a boost in their housing allowance stipends and lower prices at commissaries, according to a memorandum issued Thursday by Defense Secretary Lloyd Austin.

“I have seen firsthand how much our military families sacrifice to keep our force strong, healthy, and ready to defend this exceptional nation. In the face of challenges and frustrations, our families show incredible resilience,” Austin wrote in the memo. “Over the past year, we have focused on ways to take even better care of our service members and their families.”

Austin’s order directs an automatic increase in Basic Allowance for Housing for active-duty troops in 28 U.S. locations where rent prices have spiked an average of more than 20% in 2022.

Austin also ordered a thorough review of BAH payments for 2023 “to ensure that calculations reflect the unusually dynamic fluctuations in the housing market.”

Austin called for the Pentagon to “fully fund” its commissaries to reduce food costs for on-post shoppers. The new order aims to rapidly lower commissary prices by 3% to 5%, depending on item categories, according to the Pentagon.

Air Force Brig. Gen. Pat Ryder said Thursday that the Pentagon was introducing new funding to lower overhead costs for commissaries for them to pass on the savings to eligible shoppers.

The change should help military households to achieve a roughly 25% savings for weekly groceries by shopping at the commissary instead of a local grocer, Ryder said. Those who spend about $200 per week on food could see a $50 weekly savings, according to a Pentagon fact sheet. It lists food staples — including bread, milk and eggs — among items that shoppers can expect to see the greatest savings.

By law, commissaries must pay their own operating costs via their profits, but Ryder said the new model would significantly reduce their burden. Commissaires on Defense Department installations across the world sell food tax free with a 5% surcharge used to pay for new commissary construction and renewal efforts.

“We've changed the commissary funding model to ensure that the Defense Commissary Agency is able to provide savings by eliminating the requirement for them to earn a profit margin from higher prices to pay their operating costs,” Ryder told reporters at the Pentagon. “So, in other words, they're able to now use that money instead to put into buying down the cost of food.”

Ryder estimated savings would reach service members, families and other eligible shoppers within about two weeks.

The general said the commissary effort had long been in the works and was not a reaction to record inflation in recent months.

Austin “wants our military men and women to be able to come home, to put food on the table, to have the money in their pocket that they need to be able to live a healthy life,” Ryder said. “They deserve a comfortable life while they serve our nation — and so this is one of his priorities.”

The Basic Needs Allowance was mandated last year by Congress in its annual Pentagon policy and spending bill, which instructs Austin to implement the new stipend in 2022. The benefit will provide new funding to service members with dependents whose gross household income falls some 130% below the federal poverty line, according to Congress. The Pentagon said troops can apply for the new stipend beginning in January.

The National Military Family Association last year reported some 14% of enlisted service members in the ranks of E-1 to E-6 reported visiting food banks during the previous year because they could not afford to feed their families.

Austin promised the Defense Department would continue to find ways to improve life for military families and put more money in their pockets. Among them, Ryder noted, is an expected 4.6% pay raise next year — the largest pay boost for troops in 20 years.

“These actions reflect the [Defense] Department’s sacred obligation to honor and support our service members and families,” Austin wrote Thursday. “We remain profoundly committed to doing right by our military families, just as our military families remain profoundly committed to their loved ones and to the nation that they all do so much to defend.”