New CDC guidance: Only high-risk groups should get monkeypox antiviral 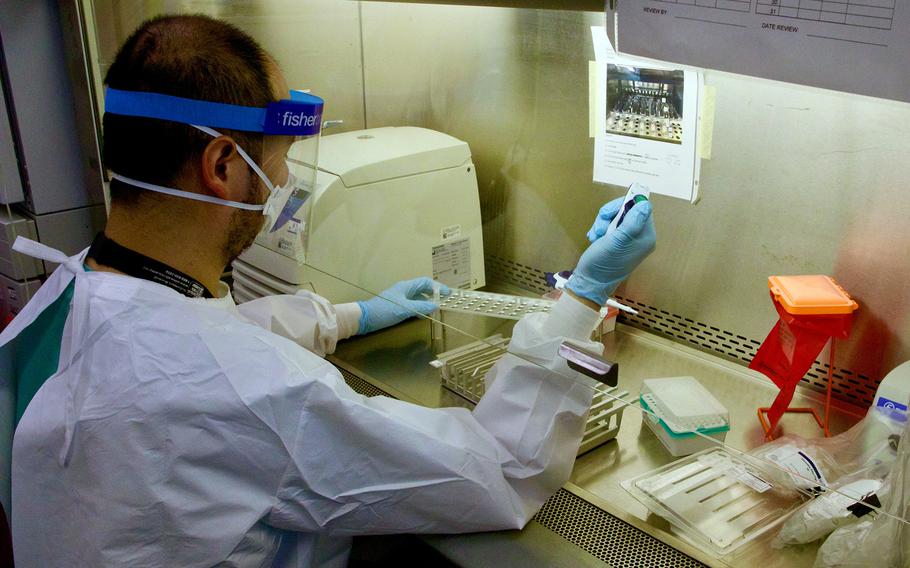 The Centers for Disease Control and Prevention issued new guidance Thursday recommending that TPoxx, the only drug available to treat monkeypox, be limited to people at high risk for severe disease even as the outbreak that has infected more than 22,000 Americans shows signs of plateauing.

Recently released data from the Food and Drug Administration suggest that broad use of TPoxx “could promote resistance and render the antivirals ineffective for some patients,” the CDC said in a statement Thursday. The antiviral, prescribed to tens of thousands of monkeypox patients, is approved for the related smallpox virus. Its use against monkeypox is considered experimental and tightly controlled by federal officials, although there is growing evidence that it benefits many patients.

But advocates who have called for TPoxx to be more widely available criticized the government’s guidance as too hasty, given ongoing unequal access to vaccination and treatment for a disease that spreads by close contact, including sex.

“There’s a theoretical concern that monkeypox virus may rapidly evolve resistance to TPoxx - but right now, that’s a theoretical concern,” said James Krellenstein, co-founder of PrEP4All, a group that advocates for access to HIV care. “We need to see more concrete steps from both the [National Institutes of Health] and CDC to determine how much of a threat it actually is, through much better research and surveillance.”

At a White House monkeypox briefing Thursday, Anthony Fauci, medical adviser to President Biden, said resistance is always a risk when using antiviral drugs. He said a recently launched study of TPoxx will track signs of mutation that could lead to resistance. The study is expected to enroll more than 500 patients across 60 U.S. sites.

The updated guidance on TPoxx use comes at a time when the growth of new monkeypox cases is dropping in the United States and abroad as vaccination and education campaigns have improved, and individuals curbed risky sexual behaviors linked to spread, public health officials said. New cases in the United States have dropped nearly 50 percent since the peak in early August.

But “there are areas of the U.S. where the rate of rise in new cases is still increasing,” CDC Director Rochelle Walensky said at the White House monkeypox briefing. On Monday, Los Angeles County health officials announced that a county resident with a severely compromised immune system had died, the first U.S. fatality from the disease. Texas health officials are still investigating the role of monkeypox in a Houston patient’s death last month.

Two otherwise healthy men in their 30s developed encephalomyelitis - inflammation of the brain and spinal cord - suggesting that neurological complications are a potential outcome of monkeypox infections, according to a CDC report last week. Both were treated with TPoxx and recovered, but have difficulty walking.

FDA officials this week cautioned that a single molecular change to monkeypox “could have a large impact on the antiviral activity of Tpoxx,” referring to its effectiveness.

Most healthy patients need supportive care and pain control and “do not need to be stepped up to antiviral treatment,” said Sapna Bamrah Morris, a CDC official working on the monkeypox response, during a recent call for clinicians hosted by CDC and the Infectious Diseases Society of America.

Tpoxx should be reserved for people with severely weakened immune systems - those with HIV that is not controlled, leukemia, lymphoma and solid organ transplants - as well as people who are pregnant or breastfeeding, children under 8, and people with skin that is vulnerable to injury, Morris said.

The vast majority of U.S. cases have been in men who have sex with men, though officials emphasize that the virus can infect anyone.

Jay Varma, an infectious-disease expert at Weill Cornell Medicine in New York City, said it is “reasonable” for the CDC to provide more explicit guidance on Tpoxx prescriptions, particularly given the absence of a randomized clinical trial into the treatment’s effectiveness to fight monkeypox.

“The challenge comes during implementation,” added Varma, a former New York City health official, cautioning about the risks of wrongly dissuading providers and patients from receiving treatment. He noted that it is “highly likely” that monkeypox infections will increasingly move away from large urban centers toward smaller cities and rural areas, where patients already face barriers when seeking care.

“Any limits on [Tpoxx] prescribing could lead to the unintended consequence of people at high risk of or with severe disease not receiving it,” Varma said.

Health officials and patient advocates point to existing disparities in vaccinations for a disease that has disproportionately spread among communities of color and stressed the need to reach more deeply into Black and Latino communities.

Efforts to control the outbreak are entering a critical time, a “harder phase of the vaccination campaign,” said Demetre Daskalakis, deputy coordinator for the White House monkeypox response, referring to the need to reach underserved communities.

Black Americans have received just 12 percent of the first doses of the two-shot Jynneos vaccine even though they make up 38 percent of new U.S. monkeypox cases, Walenksy said.

The CDC announced a program Thursday to provide up to 50,000 doses to communities that may face barriers to vaccinations because of language differences, location of vaccination sites, mistrust of government, lack of access to online scheduling, immigration status and stigma.

Research from the University of Pennsylvania released Thursday shows that knowledge of monkeypox vaccine has jumped from approximately one-third of Americans in July to more than 60 percent. The vast majority, 84 percent, know monkeypox spreads by close contact with an infected person, compared with 69 percent in July. Nearly three-quarters of Americans said they would get vaccinated if exposed.

More than 540,000 doses of the two-dose Jynneos vaccine have been administered in the United States as of Tuesday, according to the CDC. The vaccine was designed to prevent smallpox, and animal studies conducted by its Danish manufacturer have shown it works against monkeypox, too. But scientists and researchers don’t know exactly how effective the vaccine is in humans. A recent study from the Netherlands that has not been peer-reviewed found that two doses of the vaccine triggered relatively low levels of virus-fighting antibodies against monkeypox, raising concerns about effectiveness.

During the Senate’s first-ever hearing on monkeypox Wednesday, Democrats and Republicans pressed Biden officials over the administration’s initial struggles to ramp up testing and vaccinations as the virus rapidly spread in May and June.

“Frankly, too many missteps were made early on in the response, and a couple hundred cases turned into 21,000,” said Sen. Patty Murray (D-Wash.), who chairs the health panel.

“By every measure, the response from the Biden administration on [the] monkeypox crisis has been a catastrophic failure,” added Sen. Richard Burr (R-N.C.), the panel’s top Republican. “You repeated each of the mistakes in the early days of the covid response.”

Biden officials, defending the administration’s response, said they had learned from the government’s coronavirus stumbles in 2020 to move quickly to procure medical countermeasures to fight the monkeypox outbreak.

Dawn O’Connell, the assistant secretary in the Department of Health and Human Services who oversees the national stockpile of emergency medical supplies, touted her team’s decisions to order tens of thousands of doses of additional monkeypox vaccines in the earliest days of the outbreak.

“All of this was done to stay ahead of the virus, though case counts were very low in the United States,” O’Connell told the panel.