USDA to give $2 billion to food banks, schools to stem rise in hunger 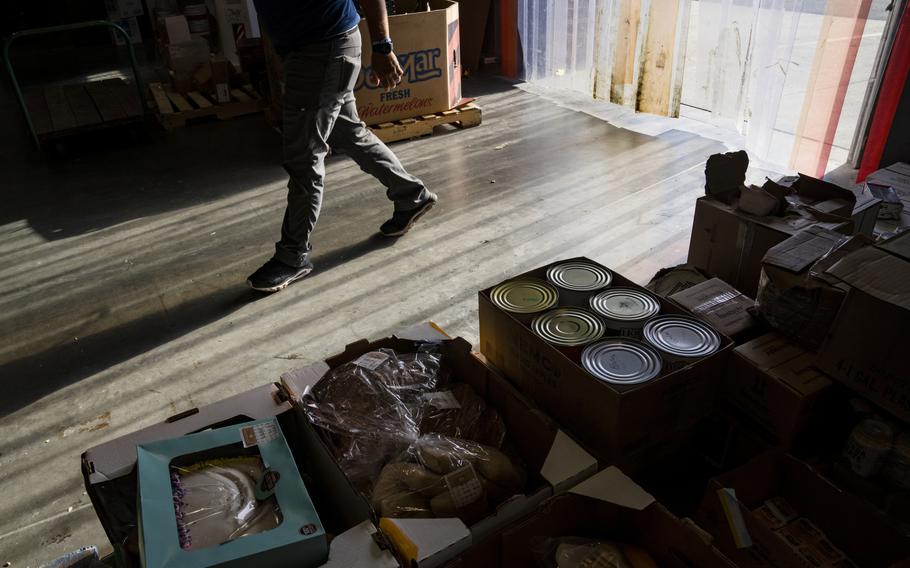 Warehouse staff perform morning operations at Connecticut Foodshare in Wallingford, Conn. Recent inflation and the loss of pandemic funding is increasing the overall costs at food banks across the country. (Joe Buglewicz/for The Washington Post)

The U.S. Agriculture Department announced Wednesday that it is providing close to $2 billion in additional funding to food banks and school meal programs for purchasing American-grown foods.

The announcement comes as key indicators suggest hunger in America is on the rise again. The end of nearly all pandemic-era social-safety-net programs, coupled with skyrocketing inflation for food, rents and fuel, has meant families across the country are struggling to cover basic costs.

The most recent census data shows that 24.5 million Americans report sometimes or often not having enough to eat in the week between July 27 and Aug. 8. That’s up from 21 million in December and 18 million a year ago.

About $1.5 billion will be directed to food banks. According to the latest survey from Feeding America, the largest network of food charities, 40% of member food banks saw an increase in the number of people served in July compared with June. Another 40% of the food banks said that, even in the face of low unemployment, they have seen no reduction in need in recent months.

“In talking to food banks and pantries across the country, here’s what we hear,” Agriculture Secretary Tom Vilsack said in an interview. “Demand is high, in terms of their need, costs have increased, labor — whether paid or volunteer — is a struggle and donations have tapered off because people think the pandemic is in the rearview mirror.”

Another $500 million will go to schools to purchase food for their lunch and breakfast programs, Vilsack said. During the pandemic, the federal government gave more money for school nutrition programs, and all American schoolchildren were offered free school meals without demonstrating need. That emergency program has just ended.

The money comes from the Commodity Credit Corporation, an obscure act from the Great Depression intended to “stabilize, support and protect farm income and prices.”

Donations are down, the supplies that food banks purchase have gotten a lot more expensive and need is back up, said Jason Jakubowski, chief executive of Connecticut Foodshare in Wallingford, Conn.

“Anecdotally, what we hear is it’s largely due to inflation — that’s the biggest concern people have,” he said. Before the pandemic, about 70 percent of the food they distributed was donated. That’s at about 55 percent now. Monetary donations have been solid, he said, but nonetheless things look grim.

“We do know that spending $16 million a year in food purchases is unsustainable,” he said. Food banks are spending down their cash reserves, eating into operating costs to purchase sufficient food.

Food banks are also contending with rising food prices themselves. The food index increased 11.4 percent in August over the last year, the largest 12-month increase since the period ending May 1979, according to U.S. Bureau of Labor Statistics data released Tuesday. Peanut butter, a food bank mainstay, is an example. 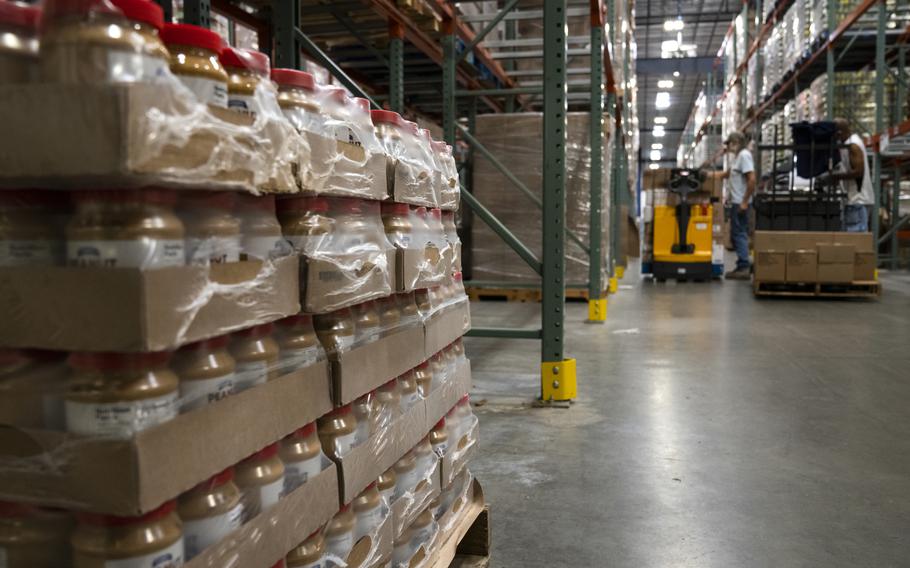 The price for a trailer-load of peanut butter has risen $7,000 in the past 16 months, forcing food banks across the country to account for the cost difference. (Joe Buglewicz/for The Washington post)

This new rise in American food insecurity comes on the heels of promising data about the effectiveness of pandemic-era assistance programs.

According to the USDA’s food security report released last week, 2021 saw the lowest rate of food insecurity among all individuals and children on record.

The report’s key finding: The number of kids facing hunger in 2021 dropped dramatically. Last year, 9 million children in the United States lived in households considered “food insecure” — that’s about 1 in 8 kids. Not only is this a substantial drop from both 2019 and 2020 and the peak of the pandemic, it’s also the lowest number on record since the USDA started tracking this in 1998.

For Erica Richardson, 50, of Salisbury, Md., making ends meet during the pandemic was tough, but she says it’s gotten even tougher in the past couple of months.

She gets around $300 a month for food from the Supplemental Nutrition Assistance Program, what used to be called food stamps, and another $328 from the Temporary Disability Assistance Program. Richardson is disabled, she said, suffering from asthma, diabetes and COPD.

“Now the prices are going up, and that’s why food stamps is not enough. I noticed it last month and the month before. And sometimes it’s hard to get food through the food banks,” she said.

She goes once a month on a Tuesday or Thursday to Salisbury Urban Ministries around the corner from the house she shares with a friend. She gets a shopping bag full of meats, canned goods and toiletries, but even with this regular assistance, it’s been a struggle to make ends meet recently, she said. 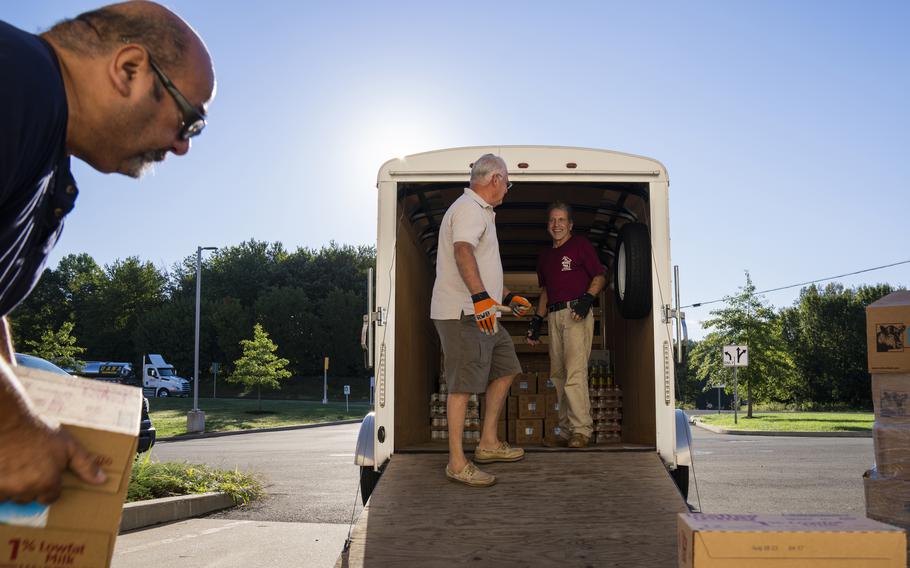 Tough times are about to get harder, as the federal government prepares to lift the coronavirus public health emergency, which increased allotments for SNAP and other assistance programs, Vilsack said.

SNAP usage increased by over 4 million recipients during the pandemic and all participants were brought up to maximum benefits. The Food Research and Action Center has calculated that with the end of emergency allotments, which Vilsack said could happen as early as October, 41 million SNAP recipients will lose an average of $82 in food benefits per month and some households will see benefits drop by as much as $200 per month.

The food bank has doubled how many pounds of food its buys and the price it pays per pound has more than doubled, Warner said.

“Whatever the drivers of hardship, people are losing ground, that’s what we’re hearing,” she said.

Adding to the challenges, she said, is getting families to fill out free and reduce-price meal applications for the first time since the pandemic began, which will leave schools with “meal debt because families won’t fill out applications and don’t have money to pay for meals,” she said.

According to Vilsack, this new money for schools is the third round of supply chain assistance funds to purchase food such as fresh fruit, milk, cheese, frozen vegetables and ground meat. Each state will allocate the funds to schools based on student enrollment, with a minimum amount per district to ensure that small schools aren’t left behind.

Money to schools will allow them to begin placing orders by the end of this calendar year and deliveries of commodity foods to food banks will occur on an ongoing basis throughout fiscal years 2023 and 2024.