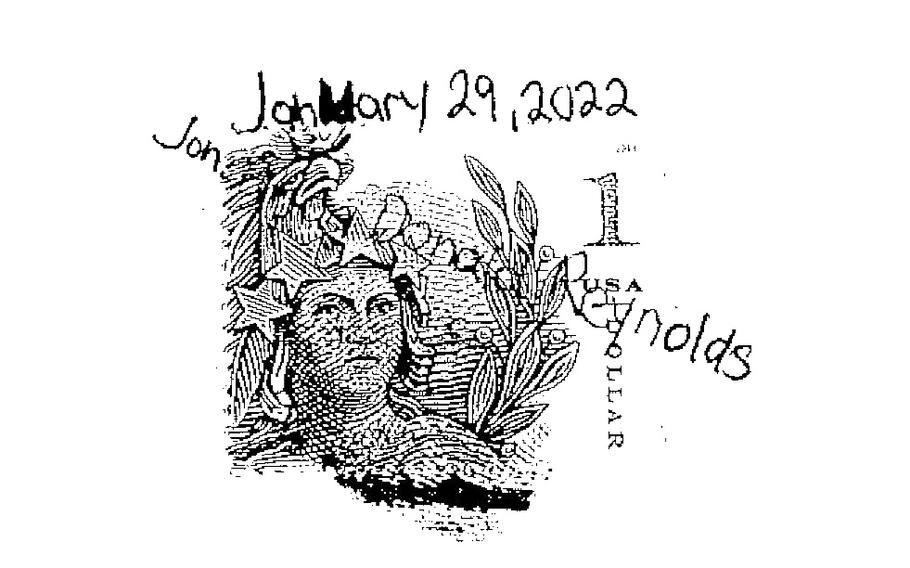 Jonathan Reynolds used his own stamp along with a fingerprint on all of his court records. (U.S. District Court/TNS)

DALLAS (Tribune News Service) — Had he paid his traffic tickets, Jonathan Reynolds likely would have gone about his business without further trouble.

An adherent of a long-standing conspiracy theory, the 34-year-old Tarrant County truck driver believes criminal laws, including traffic laws, do not apply to him. And so he turned two routine traffic tickets into a federal criminal case and a three-year prison term.

U.S. District Judge Reed O’Connor in Fort Worth sentenced Reynolds earlier this summer to 3 ½ years in prison for lying on a federal firearms form. The rarely used charge likely never would have been brought had Reynolds paid his tickets and not tried to bill the Arlington police officer who stopped him $5,000.

The “sovereign citizen” ideas espoused by Reynolds go beyond avoiding traffic fines. The FBI considers it an anti-government extremist movement. Sovereign citizens believe the U.S. government is illegitimate and actually a corporation that secretly sold bonds using citizens as collateral. There are variations, but followers generally believe the people are creditors who have a right to collect from the government and don’t have to follow its laws.

Reynolds, who recently moved to North Texas from Illinois, is adamant his rights were violated and that the government is corrupt.

“Our liberties are set in stone by treaties, and to go against Law is an act of treason, which is what the judge did the day you were at court,” he said in an email from jail.

Sovereign citizen ideology dates back to the 1970s when it was first dreamed up by white supremacists intent on defying the nation’s laws. And it doesn’t appear to be slowing down. In this era of rampant conspiracy mongering, sovereign citizens once dismissed as fringe actors have found a growing audience. Multiple offshoots sprouted online, finding acceptance among pushers of other paranoid imaginings, such as the QAnon belief in elite cabals secretly running the world while sex trafficking children.

Because some QAnon followers also question the legitimacy of the government, they are particularly receptive to sovereign citizen ideas, experts say. Studies of sovereign citizens do not indicate any belief in sex trafficking conspiracies.

“We’re in a strange period where you’re seeing a lot of crossover with some of these extreme ideologies,” said Freddy Cruz, a research analyst with the Southern Poverty Law Center who specializes in anti-government extremism. “You have people becoming more and more radicalized.”

Now, Black Americans like Reynolds are increasingly adopting sovereign principles to air grievances against the government and law enforcement.

The Anti-Defamation League reports the movement’s biggest gains have occurred among Black Americans, some of whom identify as Moorish sovereign citizens, or Moors, who insist they were America’s first inhabitants.

Cruz said the movement’s tenets provide “simple solutions to harsh realities.” Such ideas appeal to desperate people during major economic downturns, he said. But it’s also “sucking people into this world of conspiracy theories and falsehoods,” he said.

Groups that track extremism, such as the ADL and SPLC, say they have noticed an increase in sovereign citizen activity. Estimates put their numbers between 300,000 and 500,000. But the movement has no leadership hierarchy or organizational structure, and official statistics are unavailable and possibly unattainable.

The Department of Homeland Security referred questions about sovereign citizens to the FBI. The FBI said in a written statement that it does not track adherents or open investigations “based solely on protected First Amendment activity.”

“We focus on individuals who commit or intend to commit violence and criminal activity that constitutes a federal crime or poses a threat to national security,” the statement said. “We do not investigate ideology. The FBI investigates only when someone crosses the line from expressing beliefs to violating federal law.”

The ADL said in a January report that more QAnon followers are likely to find sovereign citizen ideas appealing.

Cruz said some Jan. 6 insurrectionists also have picked up elements of the sovereigns’ anti-government ideology, which typically gains ground during periods of financial insecurity and political instability.

Reynolds was pulled over in Arlington in early June 2021 for displaying an expired Illinois license plate. 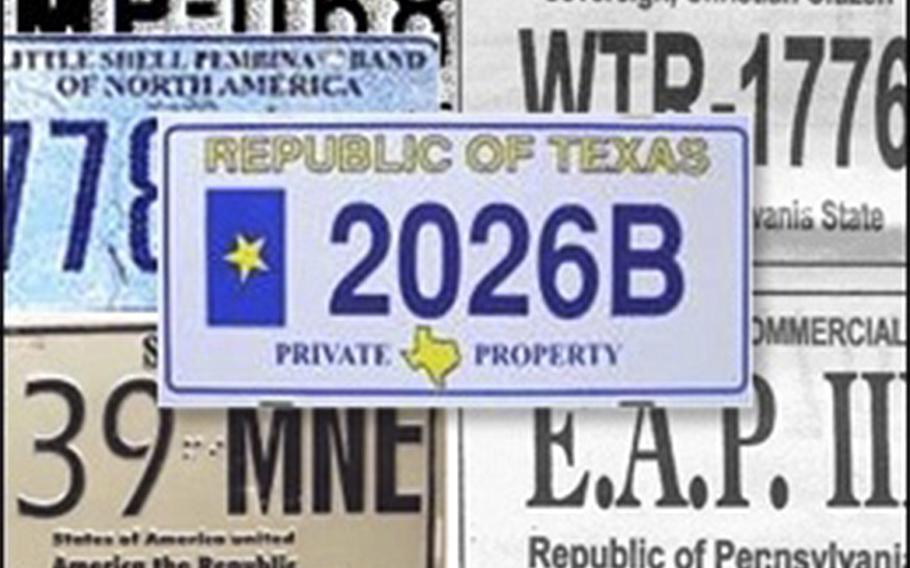 The officer wrote him citations for operating an unregistered vehicle and failing to maintain a valid driver’s license, court records show.

Almost a month later, Reynolds sent the Arlington city attorney’s office documents that appeared to seek $5,000 from the officer who ticketed him. Officials viewed that as retaliation and got the feds involved. The FBI questioned him about it and Reynolds “admitted to filing the false lien” against the officer, according to a criminal complaint.

Agents later learned that Reynolds in September 2021 falsely indicated on a federal form that he was not a felon when he tried to buy a Glock 9 mm handgun in Saginaw. The firearms background check flagged his 2006 robbery conviction out of Illinois.

Reynolds was arrested in December on a charge of making a false statement during the purchase of a firearm. Although not a lawyer, he went to trial in Fort Worth while representing himself. A federal jury convicted him in March. Reynolds faced up to 10 years in prison.

Federal prosecutions in connection with failed firearm purchases are extremely rare. Only 12 such cases were filed in 2017, according to a study by the U.S. Government Accountability Office.

Reynolds, who lived in Everman, south of Fort Worth, filed lengthy court briefings in his criminal case, sprinkled liberally with trademark pseudo-legal jargon common to sovereign citizens. He also filed a notice indicating he obtained a copyright on his name that prohibits unauthorized uses, subject to fines. And he referred to the judge in court documents as “the person doing business as Judge Reed O’Connor.”

O’Connor has dealt with sovereign citizens before in his court. The conservative no-nonsense judge even jailed two for contempt after they ignored his orders.

The judge did not entertain Reynolds’ protestations during his brief July 15 sentencing hearing. He allowed Reynolds a few minutes to speak and then brought the hearing to a quick conclusion.

“Very good,” O’Connor said when Reynolds was done and then pronounced the sentence.

Kuttiwa Reynolds, his wife, said in a phone interview that she testified for her husband at his trial as his single witness. She said she doesn’t understand all of her husband’s beliefs.

“He brought it to me and explained why he felt this was right for our family,” she said. “So being that he is the head of the household, I back my husband 110%.”

She said none of his evidence was considered at the trial and that his questions weren’t answered, adding: “I definitely feel he was railroaded.”

Sovereign citizen ideology, tinged with antisemitism, teaches that a shadowy group secretly took over the U.S. government during the 19th century and has been using financial contracts to enslave Americans. Some followers have resorted to violence — even the murder of law enforcement officers. That is rare, although adherents are known to escalate police traffic stops, sometimes ending in scuffles and arrest. 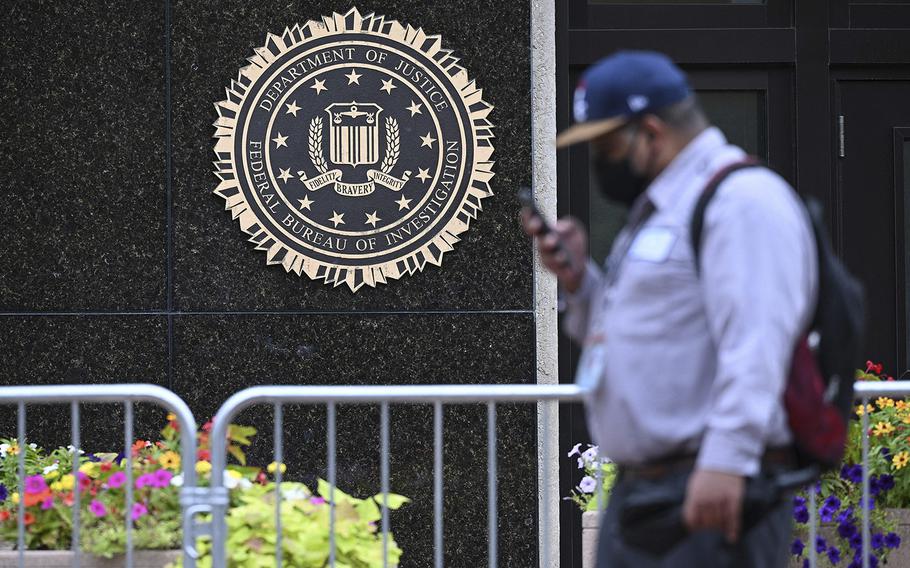 The seal of the Federal Bureau of Investigation is seen outside of its headquarters on Aug. 15, 2022, in Washington, D.C. The agency considers sovereign citizens an anti-government extremist movement. (Mandel Ngan/AFP/Getty Images/TNS)

Reynolds is not accused of using violence during the traffic stop or the subsequent investigation.

More common tactics are known as “paper terrorism,” which involves flooding courts and government offices with frivolous lawsuits, bills and pseudo-legal documents. Practitioners have also used this technique to file bogus liens against police and public officials and to commit scams such as mortgage fraud.

Reynolds has not made any threats in his legal filings. But in emails and phone interviews from jail, he remained steadfast that federal criminal court proceedings are actually the transaction of corporate financial business.

His legal briefs, which use boilerplate sovereign citizen language, generally did not address the specific allegations against him. Rather, they were mostly challenges based on his belief that he’s not a U.S. citizen bound by the nation’s laws.

Sovereign citizens dislike the term used to describe them. They have used other nomenclatures such as “freeman on the land,” “flesh and blood man,” natural person, and common-law citizen.

Reynolds calls himself an “American National” and a “Blackfoot American Indian” with “sovereign immunity.”

Reynolds said he discovered the legal doctrine he now expounds by conducting research.

“Being an American National grants me liberties that citizens would not have,” he said. “For I am also indigenous to the Americas.”

He said he researched his family ancestry and found “no sign of African blood in me.”

“I have done all the paperwork that is required to live as a free man,” Reynolds said. “And now I have been detained under duress and coercion.”

Reynolds said the criminal courts conduct corporate business. In his view, the U.S. attorney’s office uses court judgments as securities and trades on them globally. Lawyers act as private debt collectors, he said.

Everything that’s filed in court, including indictments and judgments, is “securitized and turned into negotiable instruments,” Reynolds wrote. Like other sovereign citizens, he also maintains he is entitled to punitive damages totaling many millions of dollars for the violation of his rights and that he can file liens to collect.

Cruz said those like Reynolds who do not intend violence are getting into “deeper trouble” by challenging the legal and court system.

“It complicates people’s lives unnecessarily where you just feel bad for them.”