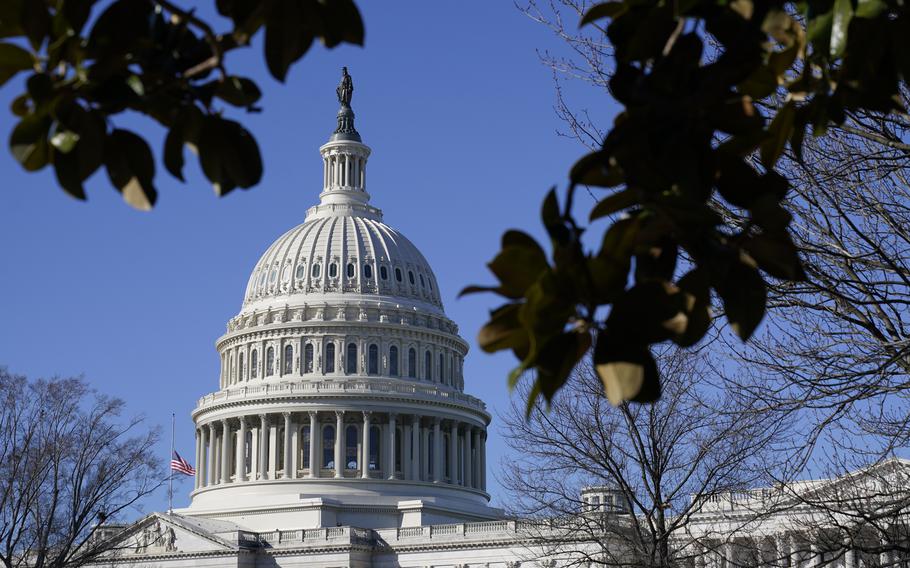 Sunlight shines on the U.S. Capitol in Washington on Monday, Feb. 21, 2022. (Patrick Semansky/AP)

WASHINGTON — A group of Democratic lawmakers is urging the White House to allow people with HIV whose illnesses have been stabilized through treatment to join the U.S. military.

The Defense Department this year lifted various restrictions on service members who are positive for HIV, the virus that causes AIDS, but continues to bar individuals living with HIV from enlisting or commissioning into the armed forces.

Six senators and 34 House Democrats described the policy as outdated and discriminatory and called on President Joe Biden to direct the Defense Department to change course.

“Anyone who is qualified and has a desire to serve their country should be allowed to do so, and we remain optimistic the administration will heed this important call,” the lawmakers wrote in the letter sent Wednesday.

The Pentagon announced in June that it was abandoning limits on who could deploy and the ability to commission for HIV-positive service members, attributing the move to significant advances in the diagnosis, prevention and treatment of HIV.

Under the new policy, service members who are asymptomatic and have a clinically confirmed undetectable viral load can serve without restrictions and would not be discharged or separated based solely on their HIV-positive status. Antiretroviral therapy greatly reduces the amount of HIV in the body and can make the viral load so low that it is undetectable in tests, according to Centers for Disease Control and Prevention.

About 2,000 members of the military are positive for HIV, according to Lambda Legal, a civil rights organization. The group litigated cases challenging the Pentagon's former policies, which prohibited service members from deploying in active duty outside the continental U.S. and being commissioned as officers.

A landmark federal court ruling in April struck down the longstanding regulations as discriminatory and said the military’s treatment of HIV as a chronic condition requiring a waiver was scientifically outdated.

The Defense Department during litigation had argued in favor of maintaining the enlistment ban for individuals with HIV, pointing to the additional costs of providing HIV-related care and claiming individuals could be tempted to join the military to obtain treatment for the condition.

Lawmakers wrote the purported justifications were not worthy of the support of Biden’s administration.

“Just as it abandoned the defense of discriminatory restrictions on service members living with HIV, we ask your administration to abandon these excuses for continuing to prevent people living with HIV who are stabilized in treatment from joining the U.S. military,” lawmakers wrote.

Democrats also asked the administration to drop similar limitations for people living with hepatitis B, which is a liver infection. A vaccine for hepatitis B, provided to all who join the military, is highly effective and reduces the risk of transmission to nearly zero, lawmakers wrote.

They called on Biden to require the Defense Department to review and overhaul its policies and bring them in line with contemporary health care guidelines.