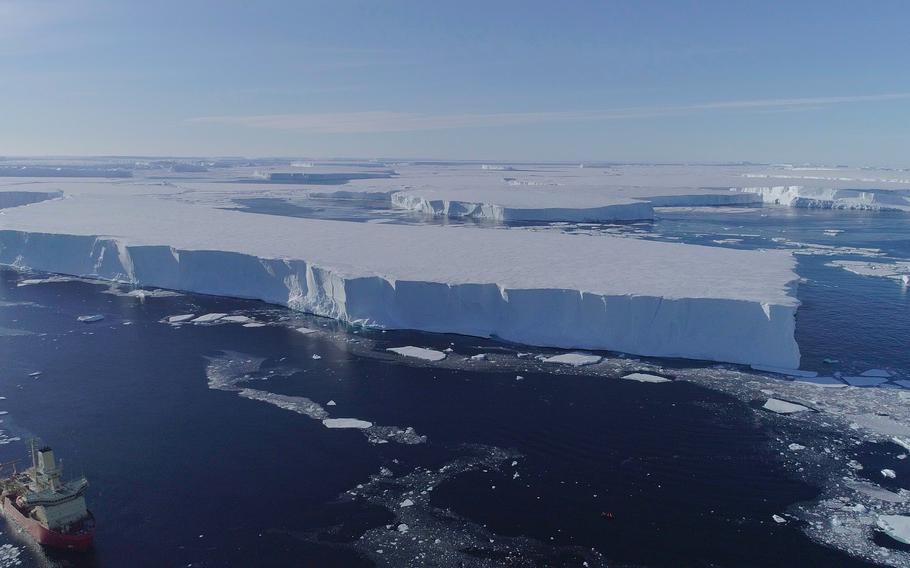 The U.S. Antarctic Program research vessel Nathaniel B. Palmer working along the ice edge of the Thwaites Eastern Ice Shelf in February 2019. (Alexandra Mazur/University of Gothenburg)

A large glacier in Antarctica that could raise sea levels several feet is disintegrating faster than last predicted, according to a new study published Monday in the journal Nature Geoscience.

The Thwaites Glacier — dubbed the "doomsday glacier" because scientists estimate that without it and its supporting ice shelves, sea levels could rise more than 3 to 10 feet — lies in the western part of the continent. After recently mapping it in high-resolution, a group of international researchers found that the glacial expanse experienced a phase of "rapid retreat" sometime in the past two centuries — over a duration of less than six months.

According to a news release accompanying the study, researchers concluded that the glacier had "lost contact with a seabed ridge" and is now retreating at a speed of 1.3 miles per year — a rate double what they predicted between 2011 and 2019.

Unlike some other glaciers that are connected to dry land, Thwaites is grounded in the seabed, making it more vulnerable to warming waters as a result of human-induced climate change. Thwaites already accounts for about 4 percent of annual sea level rise.

"You can't take away Thwaites and leave the rest of Antarctica intact," said Alastair Graham, a marine geologist at the University of South Florida and the co-author of the study, in a phone interview.

He described the consequences of losing Thwaites "existential."

According to the United Nations, more than 40 percent of the world's human population lives within 60 miles of the coast — areas that will be hit hard by rising tides.

"Thwaites is really holding on today by its fingernails, and we should expect to see big changes over small timescales in the future — even from one year to the next — once the glacier retreats beyond a shallow ridge in its bed," said the British Antarctic Survey's Robert Lartner, a co-author of the study.

Satellite images taken late last year revealed that an ice shelf used to stabilize the eastern portion of the Thwaites Glacier showed signs of cracking — what scientists say could lead to a "spiderweb" effect across the entire wedge, if hit with strong winds, according to The Washington Post.

Researchers say, however, that the collapse of the shelf would not immediately contribute to rising sea levels, though it could speed up the erosion of the Thwaites Glacier, collapsing landlocked ice from the structure into the sea.

Graham said that his team could not confidently predict whether or when the glacial structure might completely dissolve but that reducing planet-warming emissions in the next 75 years will be crucial for its survival.

"Right now, we can do something about it — especially if we can stop the ocean from warming," he said.