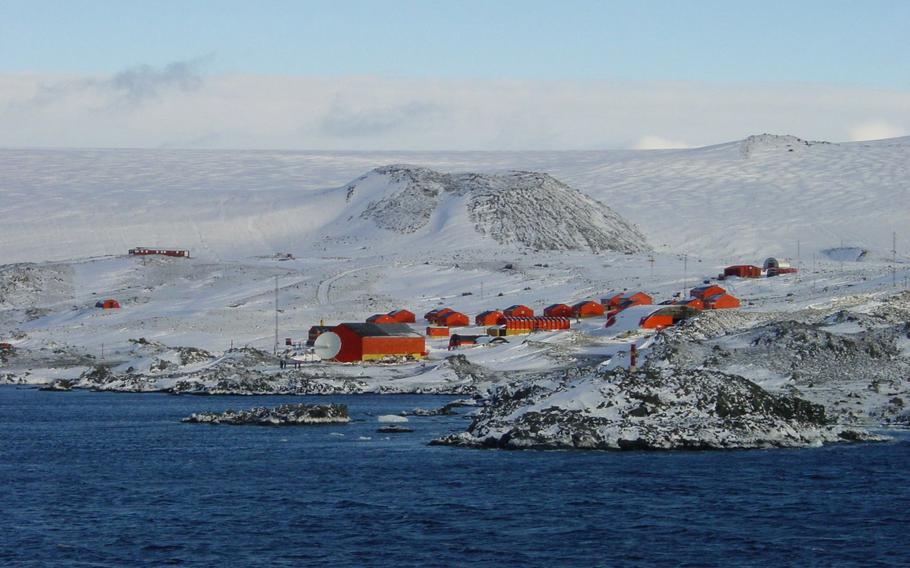 Esperanza Base during the 2001-2002 Antarctic summer. (David Demer, NOAA/NMFS/SWFSC/AMLR)

Scientists have discovered a series of worrying weaknesses in the ice shelf holding back one of Antarctica's most dangerous glaciers, suggesting that this important buttress against sea level rise could shatter within the next three to five years.

Until recently, the ice shelf was seen as the most stable part of Thwaites Glacier, a Florida-sized frozen expanse that already contributes about 4% of annual global sea level rise. Because of this brace, the eastern portion of Thwaites flowed more slowly than the rest of the notorious "doomsday glacier."

But new data show that the warming ocean is eroding the eastern ice shelf from below. Satellite images taken as recently as last month and presented Monday at the annual meeting of the American Geophysical Union show several large, diagonal cracks extending across the floating ice wedge.

These weak spots are like cracks in a windshield, said Oregon State University glaciologist Erin Pettit. One more blow and they could spiderweb across the entire ice shelf surface.

"This eastern ice shelf is likely to shatter into hundreds of ice bergs," she said. "Suddenly the whole thing would collapse."

The failure of the shelf would not immediately accelerate global sea level rise. The shelf already floats on the ocean surface, taking up the same amount of space whether it is solid or liquid.

But when the shelf fails, the eastern third of Thwaites Glacier will triple in speed, spitting formerly landlocked ice into the sea. Total collapse of Thwaites could result in several feet of sea level rise, scientists say, endangering millions of people in coastal areas.

"It's upwardly mobile in terms of how much ice it could put into the ocean in the future as these processes continue," said Ted Scambos, a glaciologist at the University of Colorado, Boulder, and a leader of the International Thwaites Glacier Collaboration (ITGC). He spoke to reporters via Zoom from McMurdo Station on the coast of Antarctica, where he is awaiting a flight to his field site atop the crumbling ice shelf.

Pettit and Scambo's observations also show that the warming ocean is loosening the ice shelf's grip on the underwater mountain that helps it act as a brace against the ice river at its back. Even if the fractures don't cause the shelf to disintegrate, it is likely to become completely unmoored from the seafloor within the next decade.

Other researchers from the ITGC revealed chaos in the "grounding zone" where the land-bound portion of the glacier connects to the floating shelf that extends out over the sea. Ocean water there is hot, by Antarctic standards, and where it enters crevasses it can create "hotspots" of melting.

Without its protective ice shelf, scientists fear that Thwaites may become vulnerable to ice cliff collapse, a process in which towering walls of ice that directly overlook the ocean start to crumble into the sea.

This process hasn't been observed in Antarctica. But "if it started instantiating it would become self- sustaining and cause quite a bit of retreat for certain glaciers" including Thwaites, said Anna Crawford, a glaciologist at the University of St. Andrews.

Models developed by Crawford suggest that Thwaites could exhibit this kind of runaway collapse, though it's unlikely to happen in the immediate future.

"But what we're seeing already is enough to be worried about," she said. "Thwaites is kind of a monster."