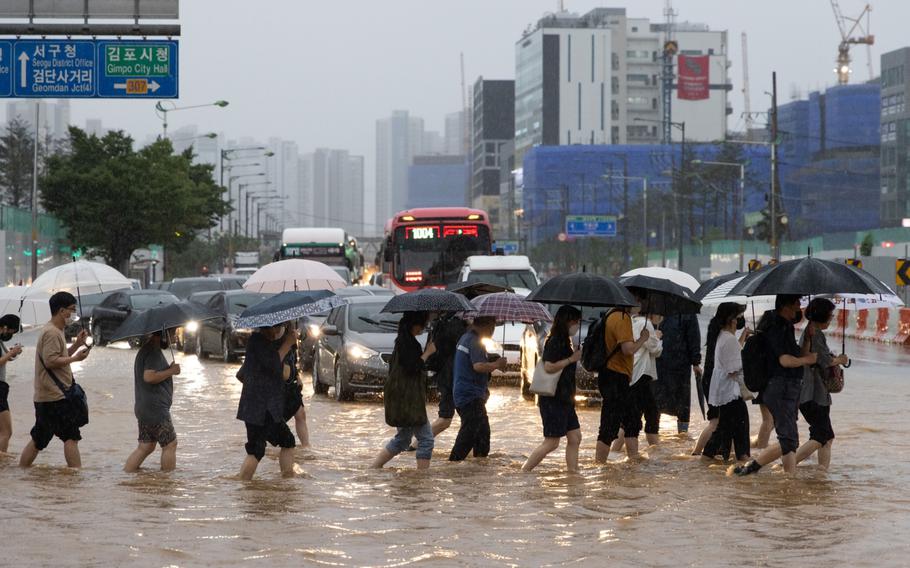 Pedestrians cross a flooded road at a junction in Gimpo, South Korea, on Aug. 9, 2022. (SeongJoon Cho/Bloomberg)

Torrential downpours claimed the lives of more than 1,000 in Pakistan, where almost half a million people are in relief camps. A massive deluge crashed across Mississippi in the past week, leaving the roughly 150,000 residents of capital city Jackson without reliable access to clean drinking water. Cascades of rain recently poured into Seoul's subway stations and turned streets into rivers in one of the worst storms in more than a century.

The world has been swept by a series of deadly floods in recent weeks, destroying homes, inundating croplands, snarling mining operations and wreaking economic devastation.

In Pakistan alone, officials estimate the damage at more than $10 billion — a toll that was part of what forced the country to secure a $1.1 billion loan from the International Monetary Fund in order to avert an imminent default. The country is now facing a looming food crisis with large swathes of farmland under water. Downpours have hit places as varied as India, the U.S. South and the U.K.

In a paradoxical turn, the torrents have come at a time when the planet is also besieged by crippling drought and dwindling rivers. While it seems to defy logic, the mechanics of the atmosphere make it possible for record-shattering floods to occur alongside widespread heat waves and drought. It's not unknowable chaos, but rather the impact of accelerating climate change.

"As the air and oceans warm under a thicker blanket of greenhouse gases, more water vapor evaporates into the air, providing more moisture to fuel thunderstorms, hurricanes, nor'easters and monsoons," said Jennifer Francis, a senior scientist at the Woodwell Climate Research Center in Falmouth, Mass.

"Heavier downpours and more frequent flooding are clear fingerprints of the climate crisis," she said.

The droughts and floods are connected. That's partly because when moisture in the air is diverted from one region, it gets dumped somewhere else. 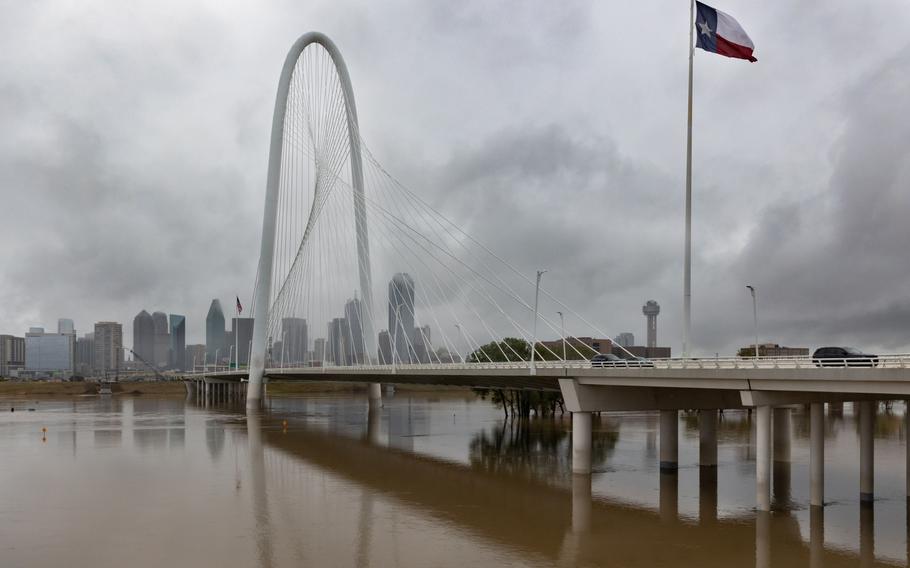 Climate change is the biggest driver. Earth's rising temperatures mean that the warmer atmosphere can hold more water vapor, said Daniel Swain, a climate scientist with the University of California, Los Angeles. Every increase of 1 degree Celsius boosts the capacity by about 7%. The period January-July 2022 was the sixth-warmest start to a calendar year for the globe in records going back 143 years, according to the US National Centers for Environmental Information.

"That increases the ceiling on how intense precipitation can become," Swain said, adding that the hotter atmosphere also allows more water evaporation.

"That same process also increases the atmosphere's propensity to act as a giant sponge and extract additional water from the landscape," Swain said. "This is often less recognized than the effect on increasing extreme precipitation, but it's still quite important: It largely explains the increased soil-drying effects of climate change and the effect of global warming on drought and wildfire severity."

Take China's Sichuan province. Just weeks ago, the area was in the grips of a historic drought that caused major power shortages and disrupted business for companies including Toyota Motor Corp. Now, the southwestern province, one of the country's most populous, is being hit by floods. More than 119,000 people have been evacuated, and authorities are asking more than 300 mines, including 60 coal operations, to withdraw workers as a safety precaution.

In places like Colorado, where capital city Denver recently saw daily record rainfall, the showers aren't undoing the deeper impact of the prolonged drought pattern that has gripped the U.S. West. But it can be enough to spark flash floods, cancel flights and put homes, property and life at risk. In New Mexico, about 200 people at a national park were recently trapped for several hours during a downpour.

Other places, including parts of Australia, are seeing a broader shift to a pattern of deluges. At the start of 2022, a relentless stream of storms caused massive flooding across the southeastern part of the continent. In a three-month outlook, Australia's Bureau of Meteorology predicts more flooding is in store.

"With wet soils, high rivers, and full dams, and the spring outlook for above average rainfall, elevated flood risk remains for eastern Australia," the bureau said in a statement.

In Pakistan, the extra moisture in the atmosphere gave the annual monsoon more power. That coupled with a rapid melt from regional glaciers "made a bad flood even worse," said Francis of the Woodwell Climate Research Center.

"Add to that the encroachment of infrastructure and homes into floodplains, and you have a recipe for the flooding disaster that unfolded," she said.

Many of Pakistan's rice and vegetable crops have been wiped out. Wheat planting, which starts in October, is also threatened at a time when the world can ill afford another disruption to grain supplies. Even before the floods, the country was facing a wheat shortage.

Of course, flooding has impacted civilization since its start. Since 1980, 36 major floods in the U.S. have caused $173.7 billion in damage across the country, according to the National Centers for Environmental Information. But now the extremes are occurring more frequently, and they've grown in power.

"Unless we treat the underlying disease — the blanket of greenhouse gases thickened by burning fossil fuels and slashing forests — events like these will happen more often," Francis said. Flooding will "intensify, last longer, and affect regions normally immune to them."