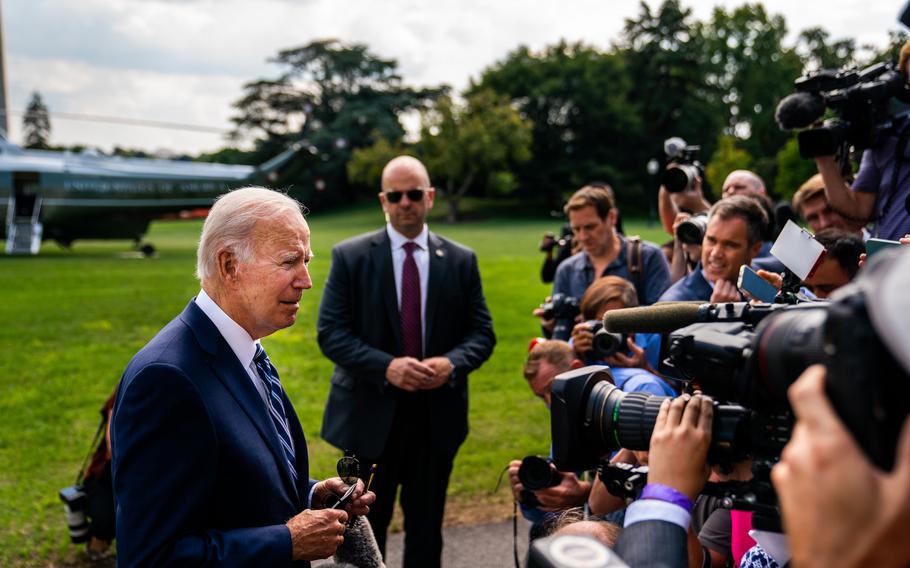 President Joe Biden speaks with the press on the South Lawn of the White House on Aug. 26, 2022, in Washington, D.C. (Demetrius Freeman/The Washington Post)

President Joe Biden on Wednesday announced plans to give civilian federal employees a pay raise in 2023, consistent with the increases he had proposed in his 2023 budget.

In a letter to House Speaker Nancy Pelosi, D-Calif., Biden said there would be an overall average increase of 4.6% for civilian federal employees to take effect Jan. 1.

"Specifically, I have determined that for 2023, the across-the-board base pay increase will be 4.1 percent and locality pay increases will average 0.5 percent, resulting in an overall average increase of 4.6 percent for civilian Federal employees," Biden wrote.

He cited recruitment and retention challenges for federal positions as part of the reason for the proposed increases. The new pay plan, he added, would allow the federal government to better compete with the private sector.

"Multiple years of lower pay raises for Federal civilian employees than called for under regular law have resulted in a substantial pay gap for Federal employees compared to the private sector," Biden wrote. "The American people rely on Federal agencies being managed and staffed by skilled, talented, and engaged employees, including those possessing critical skills sets, which requires keeping Federal pay competitive."

The raise would apply to some 2.1 million executive branch employees, although not to the more than 600,000 employees of the U.S. Postal Service, whose raises are set through collective bargaining. Cost-of-living increases for federal retirees also are determined separately, reflecting the same inflation measure used for Social Security benefits.

The president's announced pay increases are not set in stone. If Congress enacts different rates of pay increases for 2023, those numbers would take precedent over Biden's. If Congress doesn't specify any rates, Biden's numbers take effect automatically. The Democratic-controlled Congress is unlikely to push for rates lower than Biden's.

Last year, Biden announced that civilian federal employees in 2022 would receive an across-the-board base pay increase of 2.2% and locality pay increases averaging 0.5%. Congress did not alter those figures.

The Washington Post's Eric Yoder contributed to this report.