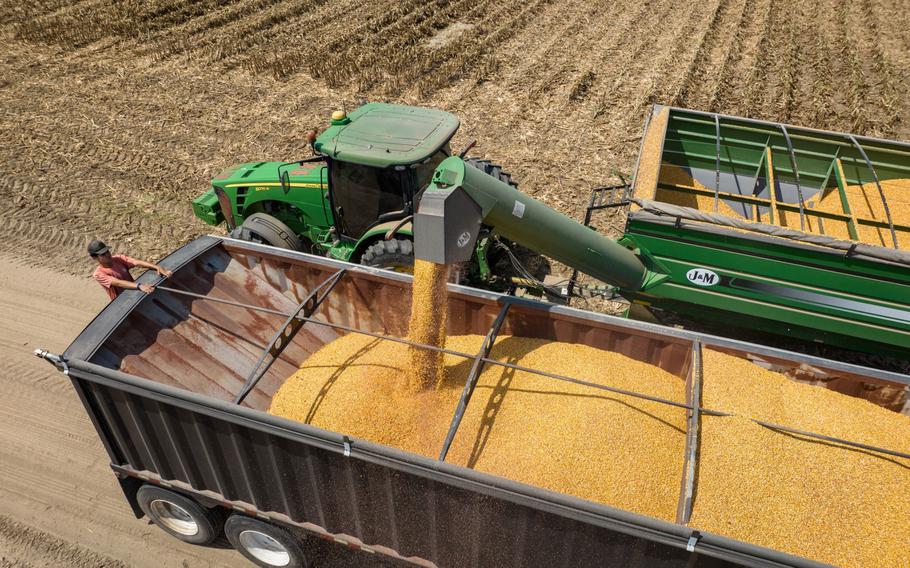 Corn is transferred from a grain cart to a truck during a harvest in Leland, Miss., on Aug. 16, 2022. (Rory Doyle/Bloomberg)

Parched soils. Grasshopper infestations. Scorching heat. Hail damage. This year's U.S. corn crop has been put through the wringer — and it shows.

Things are so bad that scouts currently on a four-day tour through the Midwest are finding plants that are stunted and browning. Scores of fields have visible impact from pests. Cobs of grain are unusually small, and sometimes, stalks aren't producing the ears at all.

The rough conditions have shriveled crops in the western corn belt. Some scouts were holding out hope that perhaps better acres in the eastern half could salvage the national harvest. Now, that optimism is fading. Instead, there's growing concern over a corn shortage.

Data collected earlier in the week showed yields in South Dakota, Ohio, Nebraska and Indiana trailing last year's average. The bad news continued on Wednesday with figures showing the same kind of trend in Illinois, the No. 2 U.S. producer. Preliminary findings in parts of Iowa were also disappointing.

On Thursday, corn traded in Chicago rose as much as 1.4%. The price was set for a seventh straight day of gains, the longest streak since May 2021.

A poor U.S. harvest will likely exacerbate the food inflation that's already been gripping the world. War, drought and the overall impact of climate change have dwindled global grain stockpiles. Corn, one of the world's most-important crops, is used in everything from animal feed to biofuels and sweeteners. The U.S. is the biggest producer and exporter.

Tour scouts on Wednesday weaved their way through Illinois and Iowa, the top corn and soybean producer. On many farms, they found corn yields that were smaller than last year — sometimes, the outlook even trailed the historical three-year average.

On one route, scouts started in Bloomington, Ill., and headed northwest toward Iowa. The further west they went, the more the dryness became apparent. The parched soils were a strong indicator that this year's crop will hardly be one of the best.

"Today, we saw more consistency, but it was not superb — I don't think there's much of a 'wow' effect," said Brian Grete, leader of the eastern leg and editor for the Pro Farmer Newsletter.

Some instances of crop disease were spotted in parts of Iowa. While it wasn't widespread, it just adds to the long list of obstacles that farmers are dealing with.

Still, some crops are showing potential to rebound. That will require good rains in the near-term as the growing season wraps up. Harvesting would typically start in a few weeks across most of the Corn Belt, but some farmers are planning to begin reaping work soon because dryness and heat are pushing some fields to the finish line ahead of schedule.

On Thursday, scouts will finish up their measurements in Iowa. A good crop in that state also has the potential to make up for losses in other areas.

Mark Bernard, a crop consultant for Agro-Economics and an eastern leg tour scout, is also quick to point out that while corn isn't looking great, soybean plants are faring better. The oilseed crop grows later into the season, so more rains in the next few weeks will help with plant development.