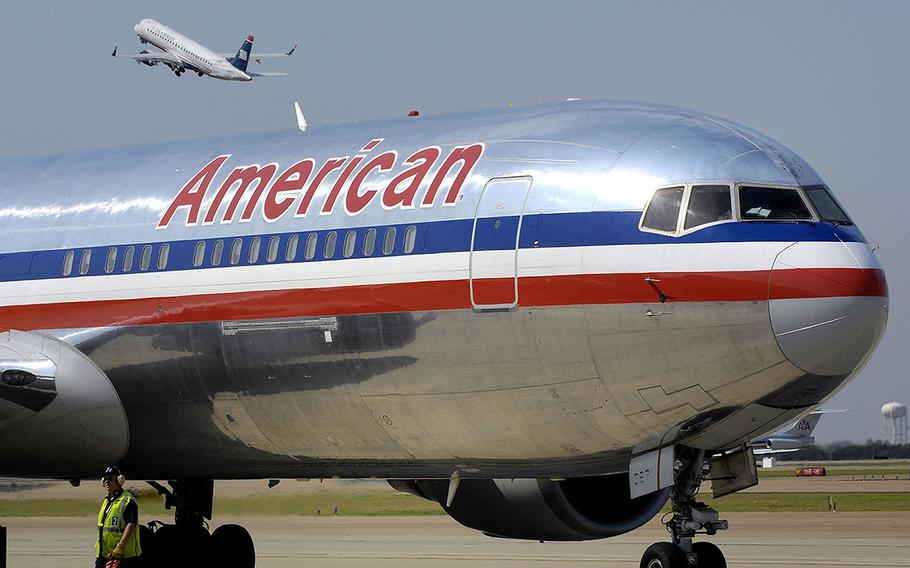 An American Airlines jet at Dallas-Fort Worth International Airport. (Max Faulkner/Fort Worth Star-Telegram/TNS)

American Airlines' efforts to build a pipeline of aviator recruits are starting to pay off as student pilots are making their way through graduation, onto regional carriers and now to the Fort Worth-based carrier's mainline.

After starting its Cadet Academy in 2018 to guide students through flight training and into careers as commercial pilots, American Airlines hired its first two pilots through the program this month. That's a five-year journey as American tries to tackle a two-pronged problem — a looming pilot shortage in one of the least diverse fields in the country.

Damion Washington, a 45-year-old from Illinois who spent time as a youth pastor before flight school, signed on to fly with American this month as a co-pilot based at DFW International Airport. American made the offer to Washington and another pilot, Keith Taylor, at the Organization of Black Aerospace Professionals conference earlier this month.

Washington spent a year with American's regional carrier Envoy before the call-up.

"I had a passion for aviation from a young age,' said Washington, who has relocated with his family to Arlington. "I had never actually even seen a black pilot before at an airline, you know, so I thought maybe I had to go through military or something like that to become a pilot and that wasn't really something I was wanting to do at that time."

American started the Cadet Academy program five years ago as major carriers realized they needed to do more to encourage student pilots before the industry faced a massive shortage. That shortage is here as airlines shutter service to small cities and park jets, despite high ticket costs that should encourage airlines to do more flying.

Airlines started to put together their own pipeline programs, helping students find schools and secure loans to pay for flight school, which can cost from $80,000 to $120,000 and take four years or more to hit the 1,500 hours of flight time required to get a certificate to fly with a commercial carrier.

Now every major airline and many regional carriers have pipeline programs and have also boosted incentives. Students who sign on early with American, complete school and make it to a captain at the mainline carrier are eligible for more than $150,000 in grants and bonuses, essentially covering the high cost of training for those who stick with the company.

In the five years since the Cadet Academy started, the program has 600 cadets and 55 have been hired to work at American's wholly owned regionals including Envoy, PSA and Piedmont.

Analyst firm Oliver Wyman estimates there will be a shortage of 80,000 pilots worldwide by 2032. American Airlines, the world's largest carrier, had just over 17,00 pilots at both its mainline and regional operations at the beginning of 2022.

Before regional airlines recently started boosting pay for first officers, pilots were walking out of school with more than $100,000 in debt and looking at wages of less than $40,000 a year. Mainline pilots at American make more than $250,000 a year on average, but it can be a long path for the high debt student pilots incur.

Those circumstances also made piloting one of the least diverse career fields in the country. Less than 4% of pilots and flight engineers were Black in 2021 and only 5% were women, according to the Bureau of Labor Statistics.

Through the Cadet Academy and programs like partnerships with the Organization of Black Aerospace Professionals, American hopes it can find more pilots while increasing diversity at the same time.

"There are people of color, women, the people with zero flight experience, because this program truly gives any aspiring aviator the opportunity to earn a seat on the flight deck," said Christina Flores, American's managing director for global talent and inclusion and diversity.

Washington, who moved from Illinois to Arizona to go to flight school, was prompted to look into American's Cadet Program by his wife, who works at the airline in the flight communications department.

But Washington said he has always wanted to fly, even if he didn't know the best path to becoming a professional pilot. Washington's grandfather was the first Black man to get a private pilot license in Arkansas, but Washington said airlines were not hiring Black pilots in that era.

Even nearly 60 years after American Airlines hired David Harris as the first Black commercial airline pilot in the U.S. in 1964, only about 3% of American's pilots are Black, 13% are people of color and 5% are women.

The company is still trying to boost racial and gender diversity in pilot ranks. In 2021, pilot new hire classes improved slightly over the company's overall rate. About a quarter were people of color, 5% were black and 8% women.

"We remain extremely intentional about diversifying the flight deck and spreading the word about the opportunities and life-changing impact [of] this career path," Flores said. "It is bigger than just this individual but the generational wealth and opportunity that can be created for the individuals, families and communities."