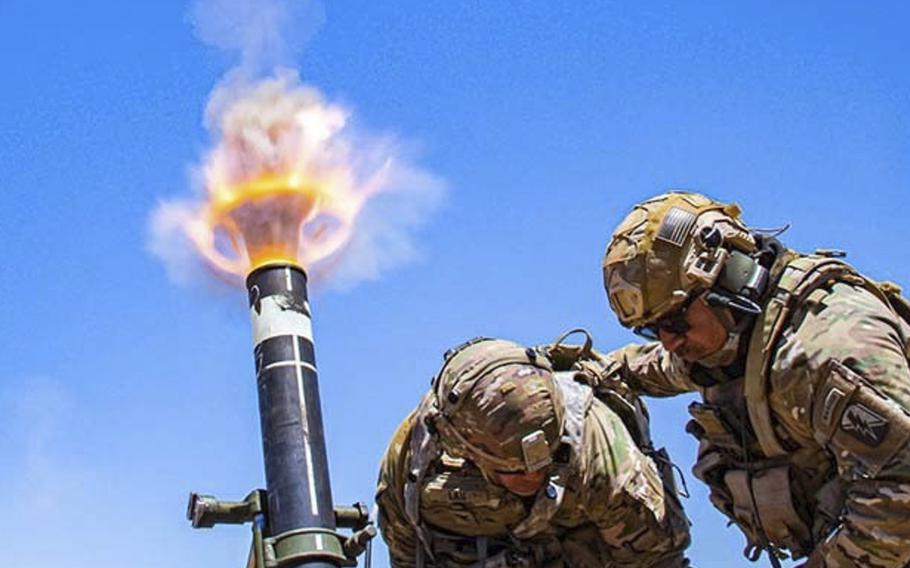 Soldiers fire a 120 mm mortar during a live-fire exercise at Camp Roberts, California, on June 15, 2021. U.S. servicemembers who have suffered hearing problems due to faulty earplugs made by the 3M Co. (Janet Aker/Military Health System)

3M Co. faces more than $100 billion in losses and bankruptcy because of lawsuits brought by veterans who blame their hearing problems on faulty earplugs, according to a litigation consultant hired by lawyers suing the industrial conglomerate.

Initial results from a handful of test cases shows 3M would be swamped by losses should the more than 230,000 lawsuits related to the company's military earplugs business go forward, the plaintiff's adviser J.B. Heaton testified in bankruptcy court Tuesday.

"It is more and more likely within the next several years we'll see a 3M bankruptcy, yes," Heaton told U.S. Bankruptcy Judge Jeffrey J. Graham during a hearing in federal court in Indianapolis.

"We strongly disagree with this unsupported and clearly flawed speculation," company communications manager Sean Lynch said in an emailed statement. "3M has committed to provide $1 billion to a trust for claimants determined to be entitled to compensation."

Some advocates for the suing soldiers want Graham to block 3M from paying any shareholder dividends, buying back any of its stock or spinning off any assets, if the judge also decides to halt the lawsuits.

Restricting how 3M spends its cash will protect money and other assets that could be used to compensate soldiers who have had their hearing damaged by the earplugs, the advocates said in court papers.

The company has a paid shareholders a regular dividend for at least a decade. Currently the quarterly payment is $1.49 per share.

Company lawyers disputed Heaton's findings during the hearing, arguing that the 19 cases in which juries returned verdicts are outliers and cannot be used to extrapolate results for the other cases. Heaton, a former trial lawyer who now studies corporate litigation, acknowledged that the sample is small and that a judge may conclude $100 billion is not realistic.

3M is in federal court trying to convince Graham to halt the lawsuits while the company's earplugs subsidiary reorganizes in bankruptcy.

Last month, the company put its Aearo Technologies unit into bankruptcy in Indianapolis as a way to resolve the claims. Under Chapter 11 rules, Aearo is automatically entitled to freeze lawsuits it faces, but because 3M itself didn't file bankruptcy a judge must agree to give the industrial conglomerate the same protection.