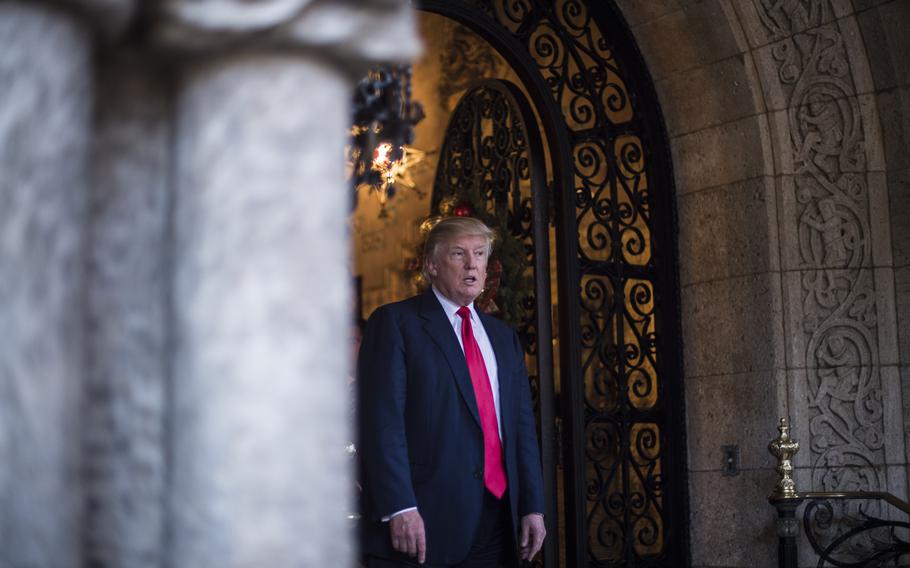 Former president Donald Trump has fought against efforts by the House to obtain his financial records. (Jabin Botsford/Washington Post)

Classified documents relating to nuclear weapons were among the items FBI agents sought in a search of former president Donald Trump's Florida residence on Monday, according to people familiar with the investigation.

Experts in classified information said the unusual search underscores deep concern among government officials about the types of information they thought could be located at Trump's Mar-a-Lago Club and potentially in danger of falling into the wrong hands.

The people who described some of the material that agents were seeking spoke on the condition of anonymity to discuss an ongoing investigation. They did not offer additional details about what type of information the agents were seeking, including whether it involved weapons belonging to the United States or some other nation. Nor did they say if such documents were recovered as part of the search. A Trump spokesman did not respond to a request for comment. The Justice Department and FBI declined to comment.

Attorney General Merrick Garland said Thursday that he could not discuss the investigation. But in an unusual public statement at the Justice Department, he announced he had personally authorized the decision to seek court permission for a search warrant.

Garland spoke moments after Justice Department lawyers filed a motion seeking to unseal the search warrant in the case, noting that Trump had publicly revealed the search shortly after it happened.

"The public's clear and powerful interest in understanding what occurred under these circumstances weighs heavily in favor of unsealing," the motion says. "That said, the former President should have an opportunity to respond to this Motion and lodge objections, including with regards to any 'legitimate privacy interests' or the potential for other 'injury' if these materials are made public."

Late Thursday night, Trump said on social media that he agreed the document should be made public. In another post early Friday, he called the nuclear weapons issue a "hoax" and accused the FBI of planting evidence, without offering information to indicate such a thing had happened. Trump said agents did not allow his lawyers to be present for the search, which is not unusual in a law enforcement operation, especially if it potentially involves classified items.

Material about nuclear weapons is especially sensitive and usually restricted to a small number of government officials, experts said. Publicizing details about U.S. weapons could provide an intelligence road map to adversaries seeking to build ways of countering those systems. And other countries might view exposing their nuclear secrets as a threat, experts said.

One former Justice Department official, who in the past oversaw investigations of leaks of classified information, said the type of top-secret information described by the people familiar with the probe would probably cause authorities to try to move as quickly as possible to recover sensitive documents that could cause grave harm to U.S. security.

"If that is true, it would suggest that material residing unlawfully at Mar-a-Lago may have been classified at the highest classification level," said David Laufman, the former chief of the Justice Department's counterintelligence section, which investigates leaks of classified information. "If the FBI and the Department of Justice believed there were top secret materials still at Mar-a-Lago, that would lend itself to greater 'hair-on-fire' motivation to recover that material as quickly as possible."

The Monday search of Trump's home by FBI agents has caused a political furor, with Trump and many of his Republican defenders accusing the FBI of acting out of politically motivated malice. Some have threatened the agency on social media.

As Garland spoke Thursday, police in Ohio were engaged in a standoff with an armed man who allegedly tried to storm the Cincinnati office of the FBI. The man was killed by police later that day; authorities said negotiations had failed.

State and federal officials declined to name the man or describe a potential motive. However, a law enforcement official identified him as Ricky Shiffer.

According to another law enforcement official, agents are investigating Shiffer's possible ties to extremist groups, including the Proud Boys, whose leaders are accused of helping launch the Jan. 6, 2021, attack on the U.S. Capitol. Both officials spoke on the condition of anonymity to discuss an ongoing investigation.

"People, this is it," the message reads. "Leave work tomorrow as soon as the gun shop/Army-Navy store/pawn shop opens, get whatever you need to be ready for combat. We must not tolerate this one. They have been conditioning us to accept tyranny and think we can't do anything for 2 years. This time we must respond with force."

In his statement on Thursday, Garland defended FBI agents as "dedicated, patriotic public servants" and said he would not "stand by silently when their integrity is unfairly attacked . . . Every day they protect the American people from violent crime, terrorism and other threats to their safety while safeguarding our civil rights. They do so at great personal sacrifice and risk to themselves. I am honored to work alongside them."

It was Garland's first public appearance or comment since agents executed the warrant at Mar-a-Lago Club, taking about a dozen boxes of material after opening a safe and entering a padlocked storage area. The search was one of the most dramatic developments in a cascade of legal investigations of the former president, several of which appear to be growing in intensity.

The investigation into the improper handling of documents began months ago, when the National Archives and Records Administration sought the return of material taken to Mar-a-Lago from the White House. Fifteen boxes of documents and items, some of them marked classified, were returned early this year. The archives subsequently asked the Justice Department to investigate.

Former senior intelligence officials said in interviews that during the Trump administration, highly classified intelligence about sensitive topics, including about intelligence-gathering on Iran, was routinely mishandled. One former official said the most highly classified information often ended up in the hands of personnel who didn't appear to have a need to possess it or weren't authorized to read it.

That former official also said signals intelligence - intercepted electronic communications such as emails and phone calls of foreign leaders - was among the type of information that often ended up with unauthorized personnel. Such intercepts are among the most closely guarded secrets because of what they can reveal about how the United States has penetrated foreign governments.

A person familiar with the inventory of 15 boxes taken from Mar-a-Lago in January indicated that signals intelligence material was included in them. The precise nature of the information was unclear.

The former officials and the other individual spoke on the condition of anonymity to discuss sensitive intelligence matters.

This spring, Trump's team received a grand jury subpoena in connection with the documents investigations, two people familiar with the investigation, who also spoke on the condition of anonymity to discuss details, confirmed to The Post on Thursday. Investigators visited Mar-a-Lago in the weeks following the issuance of the subpoena, and Trump's team handed over some materials. The subpoena was first reported by Just the News, a conservative media outlet run by John Solomon, one of Trump's recently designated representatives to the National Archives.

People familiar with the probe have said it is focused on whether the former president or his aides withheld classified or other government material that should have been returned to government custody earlier. The people, who also spoke on the condition of anonymity to discuss the investigation, said that as authorities engaged in months of discussions on the subject, some officials came to suspect the Trump team was not being truthful.

Pressure had been building for Garland to say something so the public could understand why the Justice Department - and a federal magistrate judge - believed the extraordinary step of executing a search warrant at the home of a former president was necessary. But Garland has stuck with his practice of not discussing ongoing investigations.

"Upholding the rule of law means applying the law evenly without fear or favor," Garland said Thursday. "Under my watch, that is precisely what the Justice Department is doing."

Trump and his allies have refused to publicly share a copy of the warrant, even as they and their supporters have denounced the search as unlawful and politically motivated but provided no evidence to back that up.

Lawyers for the former president can respond to the government's filing with any objections to unsealing the warrant, leaving it to the judge overseeing the case to decide. Trump also could publicly release the warrant himself.

The judge ordered the Justice Department to confer with lawyers for Trump and alert the court by 3 p.m. Friday as to whether Trump objects to the unsealing.

If made public, the warrant would probably reveal a general description of what material agents were seeking at Mar-a-Lago and what crimes they could be connected to. A list of the inventory that agents took from the property would also be released. Details could be limited, however, particularly if the material collected includes classified documents.

In addition to the anti-law enforcement threats and vitriol on social media sites and elsewhere this week, the furor over the search warrant has led to threats against the judge who approved the warrant request.

The Federal Law Enforcement Officers Association - the professional association representing 31,000 federal law enforcement officers and agents - said in a statement Wednesday evening that its agents had received "extreme threats of violence" this week.

"All law enforcement understand their work makes them a target for criminal actors," wrote the group's president, Larry Cosme. "However, the politically motivated threats of violence against the FBI this week are unprecedented in recent history and absolutely unacceptable."

Republicans around Trump initially thought the raid could help him politically, but they are now bracing for revelations that could be damaging, a person familiar with the matter said, speaking on the condition of anonymity to discuss internal deliberations.