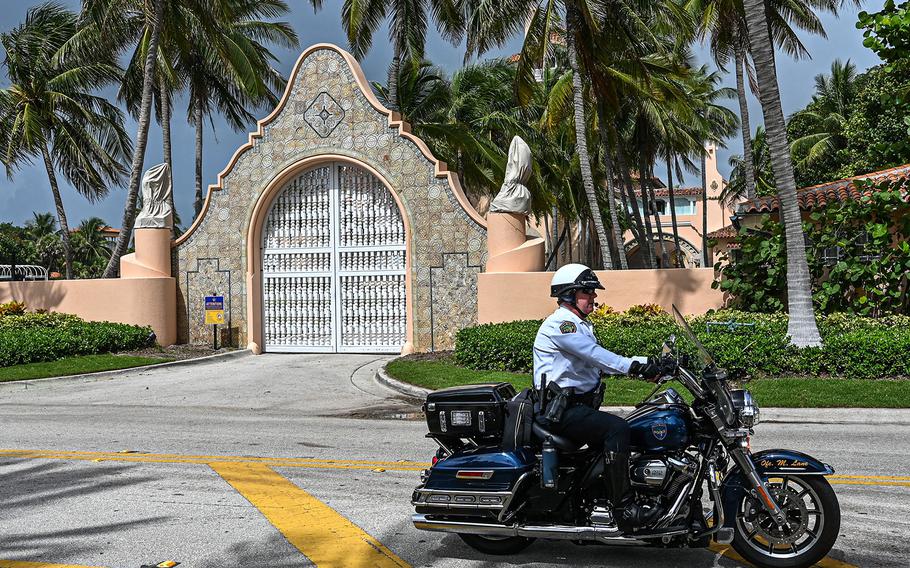 Local law enforcement officers are seen in front of the home of former President Donald Trump at Mar-A-Lago in Palm Beach, Florida on Aug. 9, 2022. (Giorgio Viera/AFP via Getty Images/TNS)

MIAMI (Tribune News Service) — In blasting the unprecedented FBI search of former President Donald Trump's Mar-a-Lago home this week, Florida Republican leaders revived a familiar theme: The targeting of a former president and political foe is something that could only happen in a "Third-World country."

Gov. Ron DeSantis, a rising star in the national Republican Party, said the scene was akin to one in a "banana republic," a pejorative term that's been historically used for some politically unstable countries in the Americas. U.S. Sen. Rick Scott said the raid was "3rd World country stuff." U.S. Sen. Marco Rubio made a comparison to Nicaragua's Daniel Ortega jailing political opponents. U.S. Rep. Maria Elvira Salazar tweeted she was concerned about the U.S. going "down the path of countries like Cuba & Nicaragua."

And Trump himself used the term in his statement confirming federal officials had been at his home, declaring the U.S. had already become "one of those Countries."

"Such an assault could only take place in broken, Third-World Countries. Sadly, America has now become one of those Countries, corrupt at a level not seen before," Trump said in a statement Monday. "They even broke into my safe!"

The ratcheted-up rhetoric about the raid, in which the FBI seized about a dozen boxes of paperwork from Trump's South Florida mansion, have had a particular resonance in Miami-Dade County. South Florida is home to thousands of residents who hail from countries where authoritarian leaders have been known to consolidate power by weaponizing judicial institutions against political enemies.

But where some saw a Third-World-like attack on a former president they support, some exiles say they saw the opposite. To some, it was proof of a functioning system as the separation of powers made it possible for the feds to raid Trump's home.

Some Hispanic leaders were quick to agree with Republican officials that the Mar-a-Lago raid reminded them of power grabs in their former countries. Ariel Montoya, a columnist and exiled conservative leader from Nicaragua, said the FBI raid reminded him of home invasions conducted by the left-wing Sandinistas in the 1980s. He argued that what makes the case so "delicate" is that Trump is expected to run for the presidency again in 2024.

"I think that's the gravest thing that could happen to the United States, that their own political institutions ... have an agenda that's being followed that, one way or another, charges against some candidates, who in this case may also aspire to the presidency," Montoya said.

But Ade Ferro, who runs the Democratic-leaning Venezuelan-American Caucus from Miami, said the comparison to countries like hers to score political points were "offensive."

"I come from a 'Third-World' country. And this is the other way around," Ferro said. "There's many, many of us who just want justice to be done .... and for our own suffering to stop being used for political gains."

Likely none of the Florida Republican lawmakers who spoke about the raid were as specific as Rubio, who has long spoken against left-wing leaders in Latin America, in comparing the U.S. Department of Justice's actions to an authoritarian government's.

"This is what happens in places like Nicaragua, where last year every single person that ran against Daniel Ortega for president, every single person that put their name on the ballot, was arrested and is still in jail. That's what you see in places like Nicaragua. We've never seen that before in America," Rubio said in a video he tweeted the night that news of the raid became public.

Ferro, who has been a vocal critic of Rubio, said that she believes it is members of the Republican Party who have taken steps to erode the separation of powers, like replacing or suspending judicial officials or contesting the results of a fair election.

"The minority leader, Rep. [Kevin] McCarthy, spoke like Diosdado Cabello in his daily show 'Con el Mazo Dando,' " Ferro said, referring to the top Venezuelan official under leader Nicolás Maduro. "He was threatening like, 'Get your papers in order because I'm going to put you in jail.' So, who are the ones acting like authoritarian regimes?"

Ernesto Ackerman, a Republican and president of the Independent Venezuelan American Citizens, was not as fast to condemn the raid. Instead, he said that what sowed distrust and doubt in the legal process is the perception that federal law enforcement has not been as quick to act against high-profile Democrats.

"I want there to be justice. If there was any infraction committed, I want justice to be served. But what I wonder is what happened to Hillary Clinton? What happened with Hunter Biden? ... What has happened with all the corrupt Democrats?" Ackerman said. "Why precisely when we're in the middle of an electoral cycle where Democrats will be defeated?"

The FBI was investigating Clinton and said so just before the 2016 election, an announcement that was cheered by her detractors and likely dogged her presidential bid.

Rubio doubled down on that during an appearance with Fox News' Sean Hannity on Tuesday night, where he said the raid was part of a "playbook" generally adopted by authoritarian communist regimes.

"I'm here in a very unique position in South Florida surrounded by people that come from countries where this is familiar to them," Rubio said. "This is shocking to Americans, but in Latin America and many of these countries around the world, here's what happens: A group takes power, one of the first things that group does is they begin to persecute and go after their political opponents and then when the supporters of their political opponents begin to complain about it, they begin to target them and they criminalize opposition."

Allusions to communism in South Florida

Eduardo Gamarra, a political science professor at Florida International University, said that the rhetoric is par for the course during an election cycle in Florida, when Republican candidates have often alluded to communist regimes when attacking Democrats. The labeling of Democrats as "socialists" has been an effective messaging strategy for Republicans in South Florida for many years. And after Trump made significant gains with Hispanic communities in 2020, the label has surged nationally in more recent election cycles.

"In contrast to what occurs in countries that are openly authoritarian, here what you see is an authorization from an independent judicial branch," Gamarra said. "A judicial branch that acts without consulting political actors and that acts with a base of criteria that are very clearly established."

Gamarra added that the comparison was also bad faith, pointing to the Trump administration's tendency to appoint officials who had little experience in their fields but that were loyal to his political platform.

The rhetoric also caught the attention of Florida state Sen. Annette Taddeo, who is running in the Democratic primary to challenge Salazar. Taddeo said the Jan. 6 attack on the U.S. Capitol while the 2020 election results were being certified was more of a reminder of something that would happen in a communist regime than the FBI raid.

"I find it just quite appalling but at the same time interesting that they would make that comparison when it's the kind of thing that we've never seen before for a reason," Taddeo said. "In this country, no one is above the law. Whether you're the former president or not."

She added that the director currently at the helm of the FBI was not appointed by Biden but by Trump, a fact that on its own should convince voters of the legitimacy of the process. "I understand how they're trying to utilize this to their political gain but I don't see how that will work when the Department of Justice was politicized under Trump."

Manny Diaz, chair of the Florida Democratic Party, was similarly outraged by the comparisons to Latin American countries and recalled that leaders in European countries have also had to face legal consequences for wrongdoing.

"They have prosecuted former leaders in those countries because they also follow the law," Diaz said.

"Nicaragua? C'mon. Is that a buzzword now?"