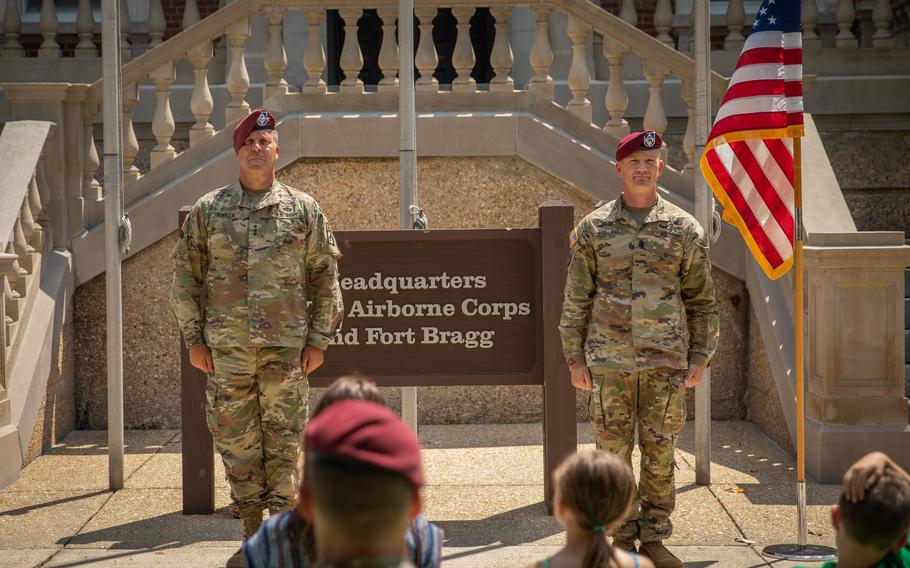 After a recent inspection of living quarters at the installation, it was announced by the Army that up to 1,200 soldiers will be moved from 10 to 12 barracks, which were built in the 1970s and do not meet today’s heating, ventilation, and air conditioning standards. (Jeremiah Meaney/U.S. Army)

A week after Army leaders at Fort Bragg, N.C., decided they must move 1,200 soldiers from a section of barracks because of mold and unsafe conditions, most of the troops are still living there.

The unsafe barracks, which are located at an area of base known as Smoke Bomb Hill, comprise about 12% of all single soldier housing on base, and leaders have spent the past week looking for other barracks on base with space to house them, according to a Fort Bragg spokesperson, who declined to be identified by name.

As soldiers are moved to new housing, the official said all soldiers would continue to live in barracks that meets the space and storage requirements outlined in Army regulations.

A “minimum” number of soldiers will be asked to move off base, the spokesperson said.

“Army leaders have always monitored the conditions in the barracks. Our senior leaders made a decision that now is the time to demolish a number of the buildings and rebuild them,” according to Fort Bragg.

The barracks are more than 50 years old and had reached a point when repairs had become more expensive than constructing new ones, the base said about the timing of their decision.

In the weeks prior, Sgt. Maj. of the Army Michael Grinston toured the barracks after a command sergeant major mentioned their declining quality during a meeting with the Army secretary, said Sgt. 1st Class Will Reinier, spokesman for Grinston. During the tour, Grinston observed significant maintenance issues in some rooms.

He raised the problems with leaders at Fort Bragg’s Department of Public Works and Army Materiel Command, and they determined it was primarily due to the building's HVAC system.

“Our top priority is our soldiers,” Grinston said in a statement. “We have to think more upstream and understand that the only way to address the root cause of the problem is constructing new buildings. Our goal is to minimize the impact on soldiers, and I have trust in our leaders at Fort Bragg to stay engaged with those affected to address their concerns appropriately.”

In the last year, Fort Bragg’s Department of Public Works received 4,365 maintenance work orders for the barracks at Smoke Bomb Hill — nearly four per resident. Of those, 95% were completed. There are 233 open work orders, which are delayed because of “continuous supply chain issues,” base officials said.

However, one soldier who serves as a barracks manager at another housing building at Fort Bragg said it’s common for maintenance staff to close out work orders without ever coming inside to view the problem, or for soldiers to be tasked with cleaning mold or water themselves.

In one instance, a hallway flooded with water in the evening. When the after-hours contractor came to look at it, he said he would be back in about four days to fix it.

“I asked, ‘Can you at least stop the water?’” said the soldier, who spoke on the condition of anonymity. “It’s the worst morale decrease ever. Once we’re in the hot motorpool, once we are in the hot field, we want to come home to a nice room.”

Instead, he said he helps soldiers put in work orders for mold growth, water intrusion and rusted stovetops. Things have improved since he moved in about two years ago, but there’s still room to improve, he said.

This week, the barracks manager said he’s been busy making room in his barracks to accommodate soldiers being moved from Smoke Bomb Hill. If his building experiences ongoing mold problems, he said he can only imagine what soldier had to withstand at Smoke Bomb Hill.

Fort Bragg’s spokesperson said a professional moving company will move soldiers’ personal items, though the official did not say when that will occur. Eight of the Smoke Bomb Hill buildings will be renovated and opened for housing again within a year, the spokesperson said. Others will be demolished. Officials have said between 10 and 12 buildings are impacted.

If any soldiers had personal items permanently damaged by mold or other conditions in the barracks, they can submit paperwork to seek reimbursement.