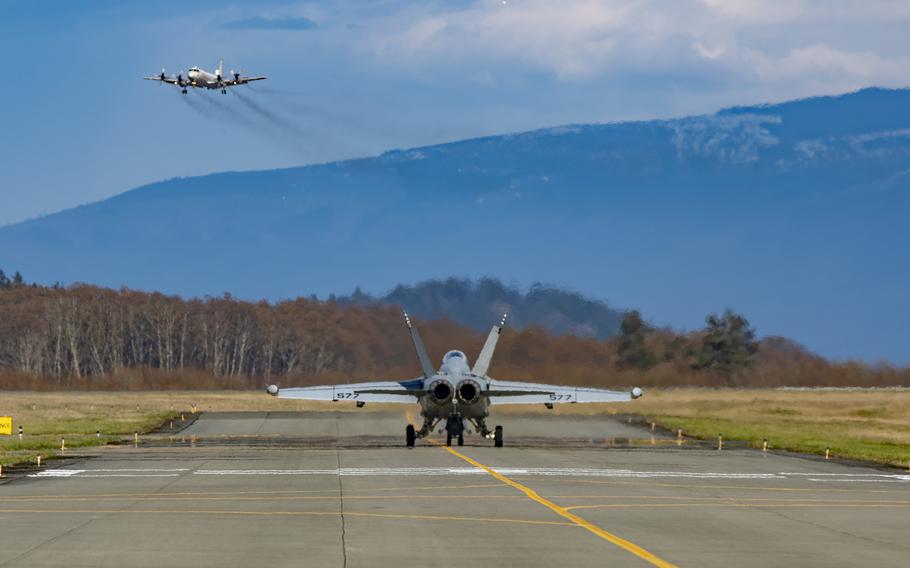 An EA-18G Growler taxis toward the runway at Ault Field as a P3C Orion performs a low approach on March 29, 2019. (Paul Seeber/U.S. Navy)

(Tribune News Service) — A U.S. District Court judge ruled Tuesday that the Navy violated federal law in an environmental study of expanded jet operations at Whidbey Island, Wash., that failed to quantify the noise impacts on classroom learning as well as other shortcomings.

Jones had asked Chief Magistrate J. Richard Creatura to report on the case, and that 38-page document filed in the court in December was a scathing review that concluded the Navy, in a March 2019 environmental impact statement, “turned a blind eye” to data that did not support the goal of increasing Growler jet operations from the air station at Whidbey Island. That violated the National Environmental Policy Act that requires federal agencies to use all practicable means so that humans and nature can exist in harmony and make systematic assessments in their planning and decision-making.

Jones’ ruling reflected Creatura’s conclusion that the Navy did not disclose how it assessed the greenhouse-gas emissions from the increased jet operations, lacked enough specifics about the impacts on some bird species and failed to give detailed consideration to an alternative training site in El Centro, California — in addition to the shortcomings in assessing the effects on students.

Under the judge’s order, the litigants have 30 days to agree on a response to the ruling, or prepare a court briefing schedule to determine what that should be.

In a state that has long hosted military bases — and welcomed billions of dollars of federal military spending — the lawsuit in U.S. District Court in Seattle marks a rare court challenge of a Pentagon decision from state political leaders.

The Boeing EA-18G Growler aircraft, which jams communications and launch systems, is a front-line force in the U.S. military’s electromagnetic warfare. The Naval Air Station Whidbey Island training takes place at both an Oak Harbor landing strip and a field near Coupeville, Island County, where crews simulate landing on ships by circling around and performing brief touchdowns.

The 2019 lawsuit followed a Navy decision to increase by roughly 33% the number of Growler operations from Naval Air Station Whidbey Island, which alarmed and angered some residents on Whidbey and San Juan islands, as well as on the Olympic Peninsula. That raised total Navy flight operations on Whidbey Island to more than 110,000 per year, according to a statement from the state Attorney General’s Office.

Navy officials in the past have said they did extensive modeling of the noise impacts as part of their environmental review, and cited the training as vital to military preparedness.

In an October 2019 response to the state’s lawsuit, the U.S. Justice Department denied that the study fell short of complying with the law, and asked that it be dismissed.

“The Navy has an important job. But that does not relieve the federal government of its obligation to follow the law and take a hard look at the public health and environmental impacts of its programs,” state Attorney General Ferguson said in a statement Wednesday.