Fed announces another big interest rate hike to thwart inflation. When will it stop? 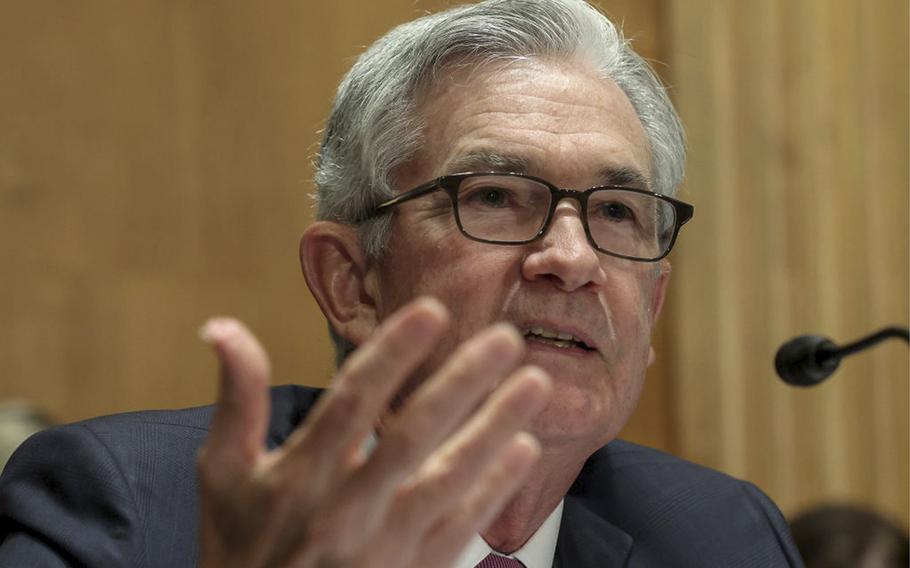 WASHINGTON (Tribune News Service) — In the most aggressive back-to-back interest rate increases since the early 1980s economic crisis, the Federal Reserve on Wednesday announced another three-quarters of a percentage point hike and signaled more to come in its effort to beat back inflation despite the risk of a recession.

The Fed's hefty increase in its benchmark rate, which will mean higher interest rates on credit cards, home and auto loans and other such purchases, seeks to curb the strong consumer demand and spending that have been a major factor in driving up prices.

Fed Chairman Jerome H. Powell, at a news conference after the policy rate announcement, said the economy is clearly slowing, with consumer activity, business investment and housing markets all softening. But noting the still-robust job growth, he said he doesn't think the U.S. is currently in a recession and that the Fed plans to keep raising interest rates over the next several months to tamp down inflation, although at a slower pace.

The central bank's efforts will also have profound implications that go beyond the U.S. and global economies.

As the Fed tries to put the brakes on inflation without skidding the country into a recession, it is intensifying political problems for both Democrats and Republicans ahead of the November congressional elections.

Both parties, but especially Democrats, could face voters' ire if prices keep rising in the months just ahead or a downturn leads to lost jobs and other unwelcome consequences.

If there are bright spots for President Biden and his party, it's that gas prices have come off their highs in June and there's positive news in an economic indicator that most Americans don't usually pay much attention to: the value of the dollar against foreign currencies.

One offshoot of the Fed's rate-hike campaign has been a surge in the dollar in recent months, which is making products from Europe, Asia and other parts of the world cheaper for American buyers.

Since the U.S. purchases trillions of dollars in imported products each year — including a wide array of things such as clothing, electronics, flowers and fresh vegetables — the stronger dollar is starting to make it a little easier for many shoppers to deal with inflation for some goods.

In June the cost to U.S. consumers for food produced at home was 12.2% more than a year earlier. That helped push up overall inflation to 9.1%, a four-decade high. Cereals and breads, eggs and milk, as well as poultry products have been rising even faster in recent months. By comparison, prices for imported foods including vegetables and fish have been trending down lately.

Carl Tannenbaum, chief economist at Northern Trust, said cheaper imports should provide a relatively small but meaningful help in lowering the rate of U.S. inflation as more companies pass on those savings to consumers.

The downside for American multinational corporations is that their exports and sales overseas will take a hit.

And the rapid and sharp gain in the dollar, Tannenbaum said, is inflicting real pain on some developing countries as they face bigger dollar payments for debt and commodities. The recent political turmoil in Sri Lanka reflected a severe economic crisis that included a shortage of dollars and a national currency that has now plunged more than 80% against the greenback.

Still, for American voters, a decline in import prices, along with companies like Walmart now starting to mark down merchandise due to excess inventory and slowing demand, could provide some relief from the decades-high inflation.

Jack Ablin, chief investment officer at Cresset Capital, said he thinks inflation may have peaked in June and July. One indication is that regular gas prices nationally averaged $4.30 a gallon on Wednesday, down from $4.90 a month earlier, according to the American Automobile Assn. In California it was $5.69 a gallon compared with $6.32 a month ago.

"There's growing evidence that consumers' willingness and ability to spend is getting tired," he said in a note to clients. "Moreover, households appear to have spent through their pandemic-supported cash hoard, as evidenced by a recent run-up in credit card debt and AT&T's acknowledgement that an increasing number of their customers' bills are past due."

On Thursday, the government is expected to release data showing the U.S. economy declined in the second quarter, after earlier reports of shrinking activity in the first three months of the year. Republicans are likely to jump all over the news, as consecutive quarters of falling real gross domestic product, or economic output, is commonly seen as evidence of a recession.

An official determination of a recession is based on an array of data, and most economists, agreeing with Powell, say that while two negative quarters of GDP might constitute a "technical recession," the U.S. doesn't appear to be in an outright downturn at the present moment. Employment thus far has held up well and the picture of the American consumer, whose spending accounts for two-thirds of economic activity, is somewhat mixed.

GDP in the current third quarter, as it looks now, appears lackluster. And what happens over the rest of the summer and beyond will depend at least in part on what the Fed does and how people react to its efforts to get inflation under control.

The Fed's policy action Wednesday is the fourth increase this year and lifts its benchmark rate to nearly 2.5%, a level that's considered neutral — that is, neither stimulative nor restrictive to the economy.

The question now is, how much more will the central bank do?

Powell said Wednesday that for now, the best guide is the Fed's last forecast released June 15 when policymakers on average projected their main rate to end the year at nearly 3.5% and rising another one-half percentage point next year.

The Fed has three more scheduled policy meetings this year. The next one is Sept. 20-21, when officials will offer updated economic and interest rate projections. Financial markets have been betting that the Fed will lift rates another percentage point this year but then reverse course in 2023.

What happens to employment figures to be a key determinant in the Fed's decision-making. As interest rates rise and the economy cools, Powell and his colleagues expect the labor market to slow from its very tight condition. But they don't want the jobless rate, currently near a 50-year low of 3.6%, to rise too much either.

"Our goal is to bring inflation down and have a so-called soft landing ... that doesn't require a really significant increase in unemployment," Powell said, acknowledging that "it's gotten more challenging over recent months."

There also are a number of other factors that will influence inflation and growth, which remain highly uncertain and are largely beyond the Fed's control, including the war in Ukraine, the global economic situation and pandemic lockdowns in China.

Supply chain problems at ports and in other parts of the logistics system have eased somewhat in recent weeks, but there's still a shortage of some parts and goods, particularly for new autos. Such imbalances have pushed up inflation.

And it will take time before the backlog of orders is cleared and companies adjust to shifting supply chains, said Shawn DuBravac, an economist and president of Avrio Institute, a consulting firm. But, he said, with demand slowing and inventories of things like apparel relatively high, many more businesses don't have the pricing power they had at the start of the year.

In recent days, some of the biggest companies, including Microsoft, General Motors, Alphabet and Walmart, have reported lower profits. And companies in finance, housing and some other sectors have cut their outlook and are shedding jobs.