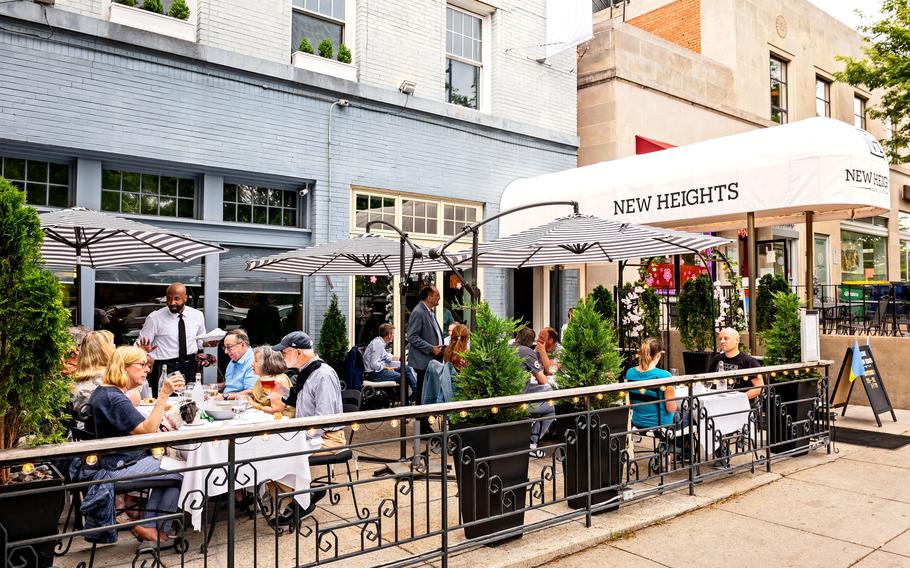 Businesses and households, which are already struggling to deal with soaring prices, say looming economic uncertainty has made it difficult to make long-term plans. (Scott Suchman/The Washington Post)

The U.S. economy shrank again for a second straight quarter, at an annual rate of 0.9%, raising concerns the country may be heading into recession and compounding the Biden administration's political challenges as it grapples with decades-high inflation.

The new figures, released Thursday by the Bureau of Economic Analysis, come at a tumultuous time for the economy, due to surging inflation, though economists disagree on the likelihood of a full-fledged slump. In the past, six months of contraction has usually indicated a recession, although the official determination is made by a separate panel of experts. Yet, recessions don't typically happen with unemployment at near record-low levels.

The second quarter slowdown reflected shifting consumer and business behaviors. Retailers bought fewer items, including cars, as consumers shifted their spending away from goods to services such as restaurants and hotels. Declines in home construction and government spending also contributed to the negative reading.

The sour GDP report reflects ongoing problems with inflation, which have been at 40-year highs for several months, as well as weakening home sales and challenges for some corporate sectors, including tech and finance. Even the-red hot labor market is beginning to show cracks. Broader worries about war in Ukraine, the global financial outlook and aggressive interest-rate hikes have prompted many economists to predict a recession in the next year.

"The numbers are baffling right now — we just don't normally see declining GDP and rising employment," said Betsey Stevenson, an economics professor at the University of Michigan and research associate at the National Bureau of Economic Research. "Employment is still growing. Consumer spending has not taken much of a hit. Households have stronger balance sheets than we normally have. Even with a negative number in the second quarter, it's going to take some serious thought to figure out whether that's really enough to say that we're in a recession."

The U.S. economy unexpectedly slowed by an annualized rate of 1.6% in the first three months of the year, largely because of a mismatch in trade — with the United States importing far more than it was exporting — and a drop in inventory purchases by businesses that were still flush with leftover goods from the holidays.

In many respects, the economy is in uncharted territory. The only time there have been six months of contraction without a recession appears to have been in 1947, according to Tara Sinclair, an economics professor at George Washington University.

Some of the signs of a slow down in economic growth are by design, thanks to interest rate hikes aimed at cooling down the economy. The Federal Reserve again raised interest rates on Wednesday, this time by three-quarters of a percentage point — an unusually aggressive hike — in hopes of curbing inflation, which is up 9.1% in the past year.

The Fed's interest rate hikes, which began in March, are already beginning to cool demand in certain parts of the economy. On Wednesday, Fed Chair Jerome Powell pointed to a number of data points — including slower growth in consumer spending, weakening demand for housing and lower business investments — as signs that the central bank's efforts are working.

But, he added, it's getting tougher to calm the economy without sending it into a tailspin.

"Our goal is to bring inflation down and have a so-called soft landing, by which I mean a landing that doesn't require a significant increase in unemployment," Powell said in a Wednesday news conference. "We understand that's going to be quite challenging. It's gotten more challenging in recent months."

Still, most economists expect the U.S. economy will end the year with growth — albeit at a much slower pace than the 5.7% gain it notched last year. Lydia Boussour, lead U.S. economist at Oxford Economics, for example, expects economic growth to slow to 1.9% this year and 1.1% in 2023.

"We are expecting the economy to slow quite sharply," she said. "The key question is: What happens in the second half of the year and where does that leave the economy?"

The White House has pushed back against concerns about a possible downturn, with senior officials pointing to a strong labor market as a sign that the recovery remains on track.

"Coming off of last year's historic economic growth … it's no surprise that the economy is slowing down as the Federal Reserve acts to bring down inflation," Biden said in a statement on Thursday. "But even as we face historic global challenges, we are on the right path and we will come through this transition stronger and more secure."

Republican lawmakers were quick to blame the Biden administration's stimulus spending for contributing to inflation and the broader economic contraction.

"You don't need a fancy economics degree to have seen this coming," Rep. Kevin Hern, of Oklahoma, said in a statement on Thursday. "Biden's spending over the last 18 months is directly responsible for the economic situation we're in today."

The GDP report showed that Americans are spending less on goods, particularly on items like clothing, food and household supplies. However spending on services, such as travel and dining out, rose modestly during the second quarter.

Businesses and households, which are already struggling to deal with soaring prices, say looming economic uncertainty has made it difficult to make long-term plans. Some families are putting off big-ticket purchases, while employers say they are rethinking hiring plans and bracing for a broader pullback in spending.

Walmart this week slashed its profit expectations for the year, causing its stock price to drop nearly 9%. The country's largest retailer, considered a bellwether for the industry, said it will have to mark down products more heavily than expected because higher gas and grocery costs are forcing many consumers to rethink buying patterns.

General Motors, meanwhile, reported a 40% drop in quarterly profits and announced plans to curb hiring. Other major employers — including Ford Motor, 7-Eleven and Shopify — are going even further, announcing hundreds, even thousands, of layoffs.

Those job losses, or just the looming fear of one, could lead Americans to tighten their belts, which would further slow the economy.

Amanda Meadows, a comic book editor in Los Angeles, was unexpectedly laid off this month. She isn't fretting yet — her partner still has a good-paying job in the video game industry and she's hopeful she can find work soon — but that hasn't stopped her from rethinking her spending habits.

"All the frivolous stuff — my restaurant budget, my clothing budget, my books budget — all of those have been cut down significantly," said Meadows, 36. "If the money is better left in savings, that's what we're doing."

Mark Beneke, who owns a used car dealership in Fresno, Calif., is starting to see worrisome signs in the economy: Demand for cars is beginning to slow, and auto loan delinquencies and repossessions are on the rise.

But he says he isn't panicking yet. Beneke is still hiring new employees, though he says he may cut back on his marketing budget and start buying fewer cars — perhaps 12 a week instead of 15 — if the slump continues.

"We're being cautious, but we're not necessarily scared to the point where we're freezing," said Beneke of Westland Auto Sales. "Things don't seem overly concerning yet."

The Washington Post's Aaron Blake contributed to this report.