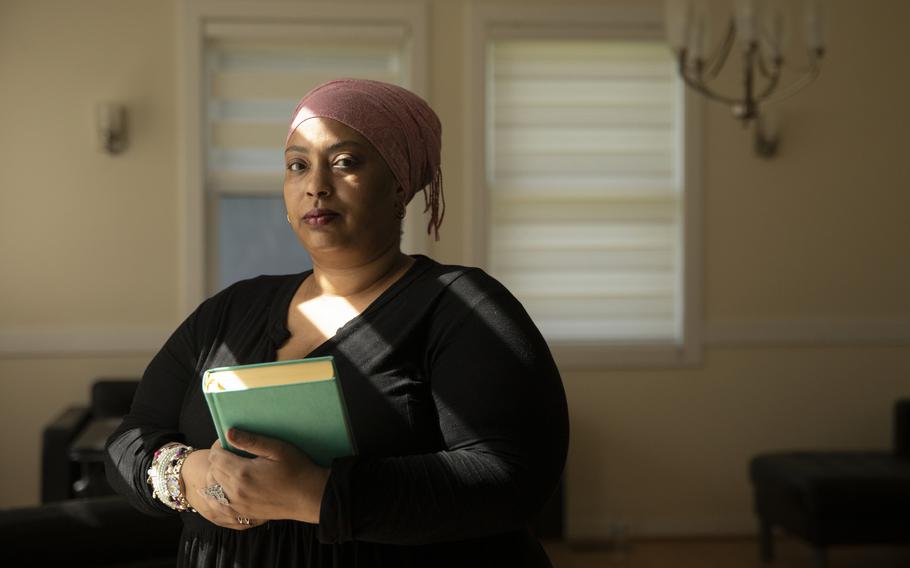 Karen Kaiser holds a Quran at her home in Lanham, Md., on July 20, 2022. She said the Quran has helped her through her disabilities and her experience with abortion. (Maansi Srivastava/The Washington Post)

Karen Kaiser will never forget her feelings of dread and sadness as she hurried past picket lines of protesters at two Maryland reproductive health clinics in 2008. "In the waiting room, I remember crying," she said, recounting her harrowing trip to Planned Parenthood, where she ultimately had an abortion.

Kaiser had decided to have an abortion after getting pregnant, in part because she was taking an anti-seizure medication called Depakote to control her bipolar disorder. The medication is known to contribute to embryo malformation and have other harmful effects on a fetus, she said.

"I wouldn't have been able to sustain [the pregnancy], but also we were worried about the side effects of the Depakote on the baby," said Kaiser, now 47 and living in Lanham, Md. "That would have been my fourth child."

Kaiser's story reflects the worry that patients with disabilities — and the doctors who treat them — are having surrounding access to abortion services in the weeks after the Supreme Court overturned Roe v. Wade.

People with disabilities — including psychiatric, chronic and physical — say they will be disproportionately affected by the loss of federal abortion protections and have been overlooked in the discussion surrounding abortion access. Studies have found that they experience higher rates of sexual violence — one situation that could lead to an abortion — in addition to higher rates of unplanned pregnancies and a higher risk of death during pregnancy compared with people without disabilities. They may also take medications known as teratogens that have harmful effects on pregnancy, including Depakote, which has the generic name valproate, in addition to topiramate and phenytoin, among other medications, according to neurology studies.

Doctors and patients worry that six-week abortion bans in states such as Texas would criminalize abortions before patients discover they are pregnant and after they are already exposed to teratogens. This is exacerbated by the fact that more than half of pregnancies in women with epilepsy are unplanned, said Jacqueline French, co-director of epilepsy clinical trials for NYU Langone Health's Comprehensive Epilepsy Center.

"By the time the woman knows she's pregnant, the damage is essentially done," she said, adding it is safer for epilepsy patients to continue taking their medication to protect their own health than to risk a seizure during pregnancy. "We're really concerned about the life of the mother."

Robyn Powell, an associate law professor at the University of Oklahoma, classified disabilities as any health conditions, including psychiatric ones, that "substantially limit a major life activity," noting that they are covered under the Americans With Disabilities Act. She said some people with disabilities take medication that harms pregnancy.

"If it's a planned pregnancy, someone would try to taper off their medication," said Powell, who has arthrogryposis, a disability that restricts motion. "But if you have an unintended pregnancy for whatever reason, I think this disproportionately harms disabled people."

The effects of valproate and other teratogens are evident "very early in pregnancy," said Marlene Freeman, a specialist in perinatal and reproductive psychiatry at Massachusetts General Hospital.

"The exposures before women even know they're pregnant can be very serious," she said. Potential fetal impacts of anti-seizure drugs include spina bifida, cleft lip and autism, according to studies.

French, the epileptologist, added that the risk of death during pregnancy for a person with epilepsy is 10 times the risk for a person without epilepsy, partly because patients may stop taking their medication while pregnant without consulting a doctor. She practices in New York, where she does not expect abortion to be restricted, but French said she expects epileptologists across the country to have conversations with patients about the potential reduction in options if they have an unplanned pregnancy.

Lucy Hutner, a reproductive psychiatrist in New York City, said the Supreme Court's decision to overturn Roe could harm patients with "serious and persistent mental illness," not only when it comes to medication but also as it relates to social factors such as homelessness or limited access to health care.

"This is a specific population who already has significant barriers to being able to access medical services," she said.

Women who spoke to The Washington Post reflected on the risks of taking medication while pregnant. Pam, of Siler City, N.C., has epilepsy. The 55-year-old, who spoke to The Post on the condition that it use only her first name, because she feared harassment, took valproate during her pregnancies more than two decades ago and gave birth to three healthy sons. She said she was warned about the medication's risks and took it anyway to control her seizures, which continued during her pregnancy.

Pam said she worries about the limited options epilepsy patients will have after Roe was overturned.

"What would be my concern is if they go in to have a checkup, and they find out that [the fetus has] got a serious birth defect but they want to get an abortion and aren't able to," Pam said.

Some states with abortion bans make exceptions if the mother's life is at stake. But Powell, the legal scholar, said she expects this criterion to be "stringently defined" and anticipates that physicians will be "very hesitant" to perform abortions where they are criminalized or restricted.

Some antiabortion groups have disputed whether people with disabilities should have abortion rights, with exceptions.

"Every state pro-life law in effect specifically prohibits actions which intentionally cause the death of an unborn child," Stephen Billy, executive director of the Charlotte Lozier Institute, an antiabortion research group, said in a statement. "Doctors who prescribe teratogenic medications for the treatment of mental health or chronic health conditions are not doing so for the purpose of causing an abortion."

Matt Yonke, spokesman for the Pro-Life Action League, said the antiabortion group does not support intentionally ending a pregnancy, though it supports exceptions when the pregnant person's life is at risk and the abortion occurs as an unintentional, "sad side effect" of a different intervention.

Some neurologists say their epilepsy patients have been overlooked in the post-Roe discussion. Ima Ebong, an assistant neurology professor at the University of Kentucky, said that some anti-seizure medications, such as phenytoin, can reduce the efficacy of hormonal contraception.

"When that happens, contraception fails, and then the patient can in fact potentially become pregnant," Ebong said. In other cases, such as with the anti-seizure drug lamotrigine, Ebong said, the contraception can allow breakthrough seizures by lowering medication levels.

In Maryland, where Kaiser took that distressing trip to a Planned Parenthood clinic nearly 15 years ago, she worries abortion access will become more difficult for disabled people who become pregnant after Roe was overturned.

"I think forcing someone who wants and needs an abortion to continue a pregnancy is terrible," Kaiser said. "I think it's bad for any baby coming into the picture. I think that the decision is terrible for women who are on medication like Depakote and who may want to decide, 'I have to keep taking this medicine, and so I'm not going to be able to continue with the pregnancy.'"