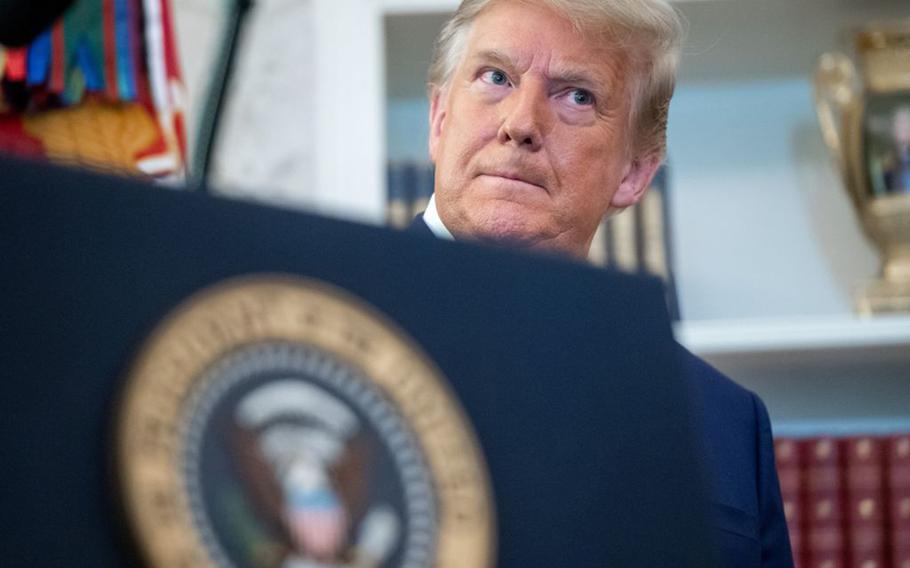 President Donald Trump in the Oval Office of the White House in Washington, D.C., on Dec. 7, 2020. (Saul Loeb/AFP via Getty Images/TNS)

As Congressional hearings into Jan. 6 pause for an August break, the focus turns to the U.S. Justice Department, which must decide whether to prosecute former President Donald Trump.

Although a House committee investigating the assault on the Capitol has laid out an array of potential crimes committed by the former president, experts say the easiest charges to prove may come from his attempts to submit lists of fake electors.

"The Jan. 6 committee has done an excellent job of putting together an evidentiary record that would be adequate to sustain a set of charges against former President Trump," said Paul Rosenzweig, a former senior counsel during the Whitewater investigation into President Bill Clinton. "But it would not surprise me if a DOJ indictment, in the end, is more narrowly drawn."

Criminally charging a former president would be unprecedented. But the House committee has laid out evidence that Trump may have incited a riot and committed seditious conspiracy among other crimes, said Donald Ayer, former deputy attorney general under Republican President George H.W. Bush.

The use of false electors is the only aspect of Trump's attempts to overturn the election results that the DOJ has confirmed is under investigation. Fake electors are also targets of an investigation a Georgia district attorney is conducting.

The Justice Department and U.S. attorney's office in Washington declined to comment for this story.

Attorney General Merrick Garland told reporters Wednesday that he isn't hesitant to investigate Trump. The Jan. 6 probe "is the most wide-ranging investigation and the most important investigation that the Justice Department has ever entered into," he said.

The department is prosecuting people related to the Jan. 6 attack on the U.S. Capitol but the attorney general didn't say anything about bringing charges against Trump.

"There is nothing in the principles of prosecution, or in any other factors, which prevent us from investigating anyone — anyone — who's criminally responsible for an attempt to undo a democratic election," Garland said. "We have to hold accountable every person who is criminally responsible for trying to overturn a legitimate election and we must do it in a way filled with integrity and professionalism."

If prosecutors can prove Trump knew the lists of alternate electors weren't legitimate, and he and his allies intended to submit them to government bodies, the former president could be convicted of conspiracy to defraud the U.S. Lists of the Trump-supporting alternate electors were sent to the National Archives after the 2020 election from seven swing states.

Federal law prohibits obstruction of any official proceeding, such as Congress' certification of the election. Prosecutors would likely argue that the submission of the false electors was done to throw the certification process into disarray.

Had Vice President Mike Pence rejected the Democratic electors and accepted the alternates, as the former president had urged him to do, the results of the election would've shifted in Trump's favor.

Trump already appears to be putting forward a defense, insisting that all he wanted was for Pence to send slates of electors back to the states for retabulation and correction.

"This may have proven to be an Election-changing event," Trump wrote in a July 22 email to supporters. "What a difference it would have made if the State Legislatures had another crack at looking at all of the Fraud, Abuse, and Irregularities that have been found. Our Country would have been a different place!"

The Jan. 6 committee has shown that most of Trump's closest advisers, including former Attorney General Bill Barr, had repeatedly told Trump there wasn't any evidence of wide-spread fraud that would have changed the results of the election. Pence has agreed he didn't have the authority to send the lists of electors that Trump had challenged back to the states, or to reject them.

The Jan. 6 hearings have provided evidence that Trump acted with corrupt intent — a key legal hurdle that Garland and his prosecutors likely would need to win a guilty verdict, Ayer said.

"The hearings have really fattened up the evidence," Ayer said. "We had an effort to overturn our democratic system. You can't really imagine a more serious or threatening crime than that."

Garland will have to find evidence of wrongdoing beyond what has been presented by the Jan. 6 committee, said Jonathan Turley, a law professor at George Washington University.

"If based on the committee's evidence, however, it is a criminal case that would be ripe for reversal even if a conviction could be secured from a favorable District of Columbia jury," Turley wrote in an editorial published Tuesday by The Hill.