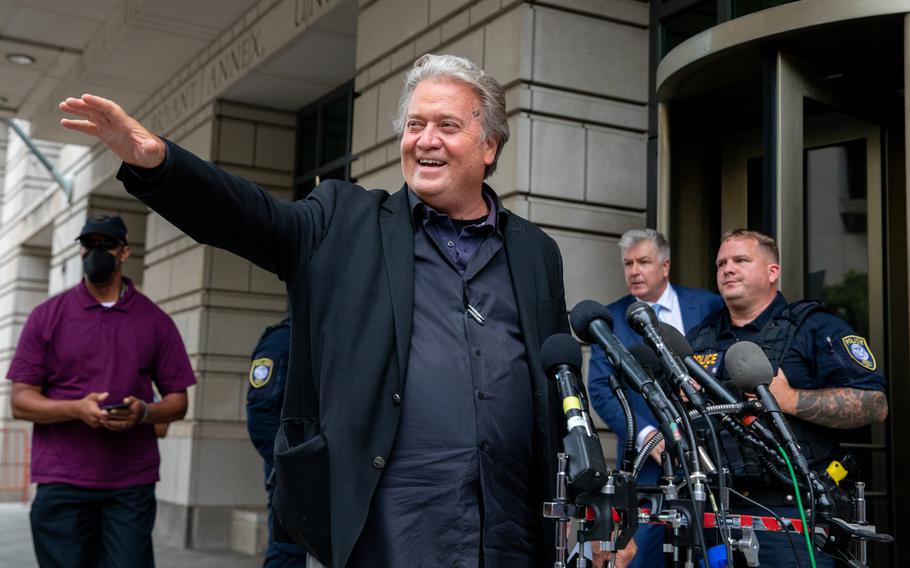 WASHINGTON - Steve Bannon, the right-wing podcaster and longtime confidante of former President Donald Trump, was convicted of contempt of Congress for his refusal to provide documents or testimony to a House committee probing the Jan. 6, 2021, attack.

The trial, which lasted a week and featured only two witnesses, tested a rarely used criminal statute meant to ensure that people comply with congressional subpoenas. Earlier this month as he prepared for trial, Bannon had vowed to go “medieval” on his enemies. But most of his legal arguments were rejected by the trial judge, and Bannon ended up calling no witnesses.

“This case is not complicated, but it is important,” Assistant U.S. Attorney Molly Gaston told jurors in closing arguments Friday morning. “The defendant chose allegiance to Donald Trump over compliance with the law.”

Bannon, 68, is the closest person to Trump to be convicted of a crime amid the fallout from the attack on Congress, which occurred as lawmakers met to formally tally the 2020 presidential election result. The contempt case involved efforts to investigate the attack on Congress and what led up to it, rather than the actual events of the day.

U.S. District Judge Carl Nichols scheduled sentencing for Oct. 21. Each of the two misdemeanor charges is punishable by at least 30 days and up to one year in jail. But such prosecutions are rare, and no one has been incarcerated for contempt of Congress in more than half a century, since the red-baiting trials of the Cold War era.

Gaston, in her closing, highlighted Bannon’s failure to respond or to produce a single document before the subpoena deadline, after which Bannon’s attorneys asserted that Trump intended to invoke executive privilege.

“His belief that he had a good excuse not to comply does not matter,” Gaston said, drawing out the final words to make the point.

In his closing argument, defense lawyer M. Evan Corcoran suggested that the panel’s subpoena was illegitimate and politically motivated, and that the deadlines for Bannon to comply were merely “placeholders” for further negotiation.

Much of Bannon’s trial strategy seemed designed to bolster a future appeal.

Nichols had earlier rejected a host of potential defenses, including Bannon’s contention that Trump had claimed executive privilege over his testimony and documents. Nichols, a 2019 Trump appointee who served in George W. Bush’s Justice Department from 2005 to 2009, said Bannon’s lawyers were mostly limited to the issue of whether he understood the deadlines for answering lawmakers’ demands. The judge also said Bannon could argue whether he thought the window for compliance remained open.

On Friday, he twice stopped Corcoran from offering arguments about the legitimacy of the subpoena that had previously been rejected.

Bannon’s attorneys have signaled that they will appeal Nichols’s rulings that a defendant charged with contempt of Congress cannot raise as a defense that he or she was relying on the advice of counsel or believed their cooperation was barred by a president’s claim of executive privilege.

Nichols had said he would wait until jurors returned a verdict or were discharged before ruling on a defense motion challenging two other issues: whether prosecutors have met their burden of proof, and the judge’s rejection of a defense request to call Rep. Bennie Thompson, D-Miss., the Jan. 6 committee chair, as a witness.

He did not immediately rule on those issues when the jury returned its verdict, which came after about 2 1/2 hours of deliberations.

In his closing, Corcoran took aim at the credibility of the main prosecution witness, Kristin Amerling, the chief counsel for the Jan. 6 committee and a longtime aide to Democratic lawmakers. He suggested she and the Democrats on the committee were in a rush to score political points and punish Bannon, singling him out of more than 1,000 committee witnesses in an election year.

The trial began Monday with a full day of jury selection, during which several potential jurors were dismissed because of their familiarity with or opinions of the Jan. 6 riot and subsequent investigations.

The prosecution witnesses were Amerling, who described how Bannon did not engage with the committee until after he had missed the first response deadline; and FBI Special Agent Stephen Hart, who talked about his conversation with a lawyer who represented Bannon in his dealings with the committee, as well as postings made by one of Bannon’s official social media accounts after he was subpoenaed.

Bannon’s lawyers did not present any defense witnesses.

Bannon is one of two former Trump aides to face criminal charges in connection with rebuffing the committee, along with former White House trade adviser Peter Navarro, whose trial is set for November.

The Justice Department has said it would not charge former Trump White House chief of staff Mark Meadows and communications chief Daniel Scavino Jr., who also were referred by Congress for potential criminal prosecution.

Unlike Bannon and Navarro, Meadows and Scavino engaged in months of talks with the committee over the terms and limits of potential testimony and executive privilege claims. Meadows also turned over thousands of text messages and communications with members of Congress and other White House aides before ending negotiations and withdrawing his appearance for a deposition.

And unlike the other three men, Bannon left the Trump White House in 2017 and was a private citizen at the time of the 2020 election and subsequent presidential transition.