Precision and form draw crowds, and awe, at Thunder Over Michigan 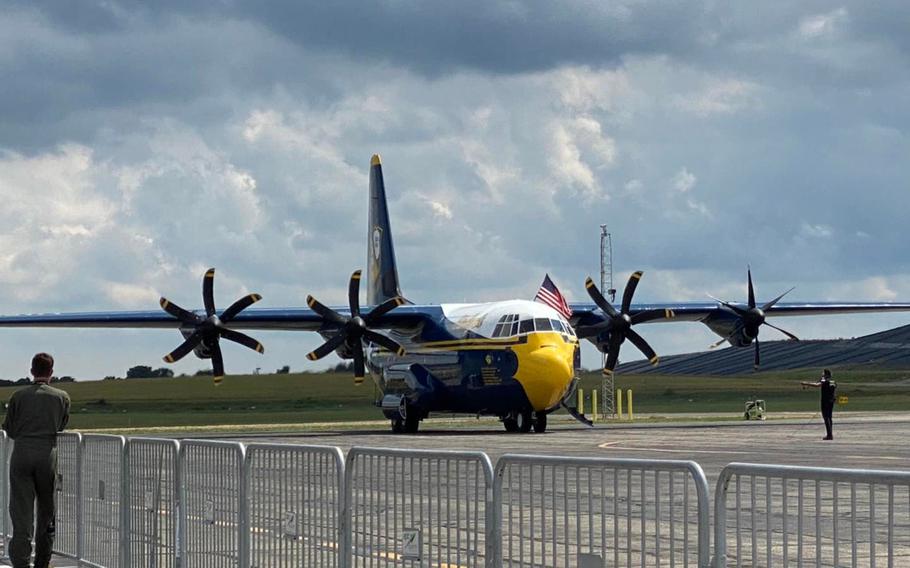 The event is an annual fundraiser for the Yankee Air Museum in Ypsilanti. It featured two shows with U.S. Navy Blue Angels and two with the U.S. Air Force's F-16 Demo Team. The F-16 Demo Team featured for the first time for its Thunder Over Michigan show a female pilot, Capt. Aimee "Rebel" Fiedler.

The air show was canceled in 2020 due to COVID, but returned in 2021 with a drive-up format that continued this year. Fans bought tickets per car and watched the show from the field in and around their vehicles.

In addition to the air show, the event also featured aircraft on display as well as helicopter rides, food and a "KidZone" area. Rosie the Riveters had a merchandise display and reminded fans of the critical role women held at the former WWII bomber plant.

Dennis and Pam Stom of Ann Arbor and their children, Nathan, 13, Carver, 11, and Betty, 8, are regular attendees. One of their first stops Sunday was a visit to a Navy helicopter on display, HSC-22.

"We love history," said Pam Stom after the family spent some time chatting with a naval aviator. "We love military history."

They started attending the event when Nathan was 5 because of his interest in planes.

"I like the history of planes and I like to look at them and how the mechanics work," he said. "I find it interesting they fly airplanes as their job."

Pam Stom said she was interested in supporting the Yankee Air Museum. At $225 per car, the proceeds benefited the museum.

"It's supporting a cause, and I think that's important," she said. "It's not cheap to be here. I think supporting the museum is doing your part."

About a half-dozen aircraft acts performed during the last show of the weekend, with the U.S. Navy Blue Angels performing for about 35 minutes.

Jeanene Van Every said she's drawn to the aerial displays because of the precision and form the pilots demonstrate. The Howell-area resident attended the event with her husband, son and daughter-in-law.

"It's like a ballet in the sky," she said. "It's beautiful. It's phenomenal technology."