Inside how Texas trains teachers to carry guns 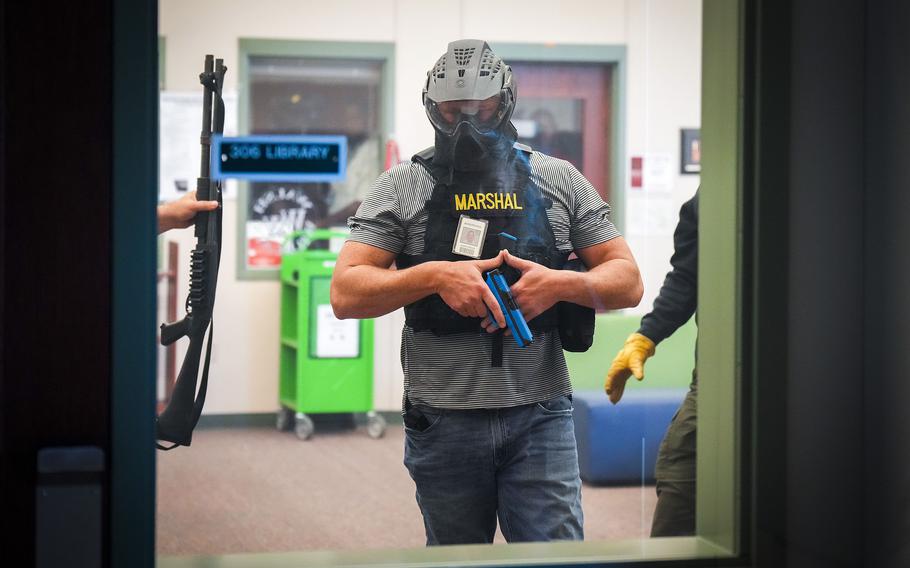 ROUND ROCK, Texas (Tribune News Service) — Pacing along bookcases that came up to his chest, a man, dressed in a black hoodie and carrying a long gun, charged into Walsh Middle School’s library.

He fired rounds into the carpet — loud booms and eruptions of smoke punctuating each shot. Within seconds, two armed educators pursued the gunman, shooting him with fake ammunition, forcing him to the ground and securing his gun.

A school police officer arrived a moment later and yelled at all three to raise their hands in the air.

This Round Rock event is an example of the scenario-based training Texas uses to prepare educators to carry firearms on campus.

Texas schools have long had the option to arm teachers and staff, namely through the school marshal program, but few districts opted in. Only 256 employees are trained to carry a gun onto campuses as marshals, representing a fraction of the state’s nearly 750,000 public school staffers.

Since the school shooting in Uvalde, the state agency overseeing the marshal program is urging more districts to arm educators, and proponents believe more money and training opportunities are crucial to expanded access. State leaders are calling for better school security through physical upgrades and by increasing the number of armed personnel.

“We all have concerns about putting guns in our schools, but at the same time, we know that these events are on the rise,” said Huffman Superintendent Benny Soileau, who serves as a school marshal in his 3,400-student district near Houston. “We’ve got to have a way of combating this. And in the event something like this were to happen, we want to be well prepared to protect our kids.”

The Texas Commission on Law Enforcement doubled the number of training opportunities this summer from two to four so that school districts can add marshals. The agency is focused on expanding availability of the program even further.

The marshal program has existed for almost a decade. Private schools and community colleges can also participate. Only 62 of the state’s more than 1,000 school districts have marshals. Public school districts can also arm employees through a separate, less regulated measure called the “guardian plan.”

The names of districts and employees participating in either school marshals or the guardian plan are confidential though some officials, such as Soileau, have publicly discussed implementing the programs.

In recent weeks, more school leaders have called the commission asking for details about how the marshal program works. Cullen Grissom, the commission’s deputy chief, said he couldn’t quantify the increase.

Having an armed staff member on campus doesn’t guarantee a school shooter will be stopped or prevented from carrying out an attack.

School marshals have no legal obligation to act during a threat.

During the 2018 school shooting at Marjory Stoneman Douglas High School in Florida, an armed school resource officer never went inside the school or attempted to engage the gunman.

In Uvalde, state and federal officials are investigating why more than a dozen officers remained in the hallway as the gunman shot at students and teachers in a nearby classroom for more than an hour.

The educators who enter the program often have a distinct drive to protect their students, Grissom emphasized.

“A marshal or a peace officer’s job in the event of an active shooter is to isolate, distract and neutralize the threat,” Grissom said.

Huffman County school leaders — who have had the marshal program in place since 2018, after the deadly Santa Fe High School shooting — actively identify educators they believe are qualified for the role.

“We’ll go through and talk with them extensively about the pros and cons and some of the things that they may face in the program to make sure that they are a good fit,” Soileau said. “We’re very careful with our selections.”

A variety of school staffers enter the state’s marshal training program, Grissom said. Some have background in the military, law enforcement or private security while others have limited related preparation.

Trainees must have a state handgun license and, therefore, experience working with guns. They also must be an employee of the school district and pass a psychological exam.

If they meet those requirements, they can begin training.

School marshals are required to undergo an 80-hour program, done throughout the course of eight- to 10-hour days, Grissom said. Two providers offer the program across the state, including the West Central Texas Law Enforcement Academy in Abilene.

Would-be marshals learn about weapons handling and basic marksmanship. The handgun training is almost identical to that of a peace officer, Grissom said.

They must also participate in simulated events that mirror circumstances marshals may face including chasing down a gunman on a campus.

“We try to simulate as best we can an active shooter coming into a school district, going after the children, doing the bad things that they do and how our school marshals will respond, using their tactics, using what they’re trained to do,” said Janna Atkins, the criminal justice manager and training coordinator with the Abilene law enforcement academy. Atkins also serves as a Texas Commission on Law Enforcement commissioner. 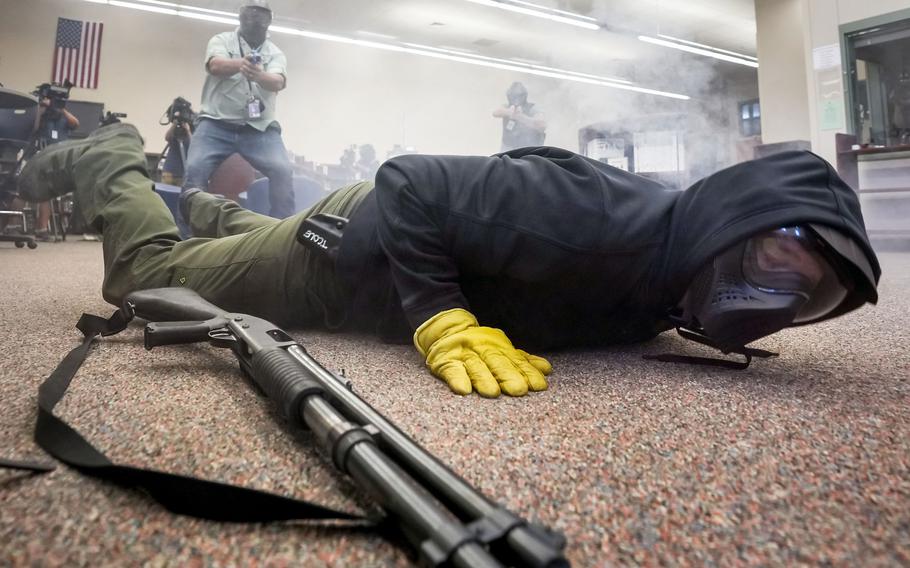 Taylor County sheriff's deputy Brad Gailey falls to the ground as he portrays an active shooter while pursued by two school marshals during a school safety training demonstration in Round Rock. Officials from Texas Commission on Law Enforcement say more districts are inquiring about the program that allows teachers and school staff to carry guns on campus. (Smiley N. Pool/The Dallas Morning News)

Some don’t make it through training.

“Not everybody’s cut out to be a school marshal, not all educators or staff are cut out to lead an armed lifestyle inside a school,” Grissom stressed. “Some people come to the training and … remove themselves from the process because they don’t feel comfortable.”

Others may fail the written exam or simulated training scenarios, Atkins said.

Every two years after they are certified, marshals have to brush up on training and undergo a new psychological exam.

The state has not modified its preparation courses based on what happened in Uvalde, Grissom said. Since the deadly shooting, conflicting reports about the role of police officers have emerged, calling into question whether protocols were followed and lives could have been saved.

Grissom said the Texas Commission on Law Enforcement wants to look into whether the issues in Uvalde were because of problematic training or a misapplication of training.

A lack of financial support and logistic implications creates roadblocks for some schools interested in the marshal program, officials say.

The state covers the cost of the training course through a grant, but districts foot the bill for employees’ travel to sessions. They also must decide whether to pay employees for the training time and if staffers are provided guns or must bring their own.

Huffman school marshals receive a small stipend for their role. They often purchase their own equipment with the money, Soileau said.

The superintendent added that more state funding would aid schools in their rollout. But, he emphasized, it is important for local communities to decide whether to add marshals to school campuses.

Many question the potential hazard of having a non-peace officer with a weapon on campus, and teacher groups have criticized calls to arm educators as a response to school shootings.

“We don’t need more guns in schools,” Zeph Capo, who is president of the Texas chapter of American Federation of Teachers, wrote in a letter to members. “We don’t need another roundtable to explore options; we’ve done that. We need legislation that addresses common-sense issues and ensures our children and their teachers can learn and work without constant fear for their lives.”

The Texas Commission on Law Enforcement has no record of marshals discharging their weapons at inappropriate times, Grissom said. It’s also hard to pinpoint how the marshal program has made a difference — if any — during active shooter events.

“I don’t know any of the active shooter events that we’ve had that we’ve actually had a school marshal stop it,” said Atkins, the commissioner.

In Huffman, one of the benefits of having marshals on campus is cutting down on a potentially lengthy response time. Located in an unincorporated area of northeast Harris County, the district established a school district police department with officers based on campuses just a few months ago, said Police Chief David Williams.

“The benefit we see behind that is rather than having to wait for police response, which could be several minutes away, and then you have to worry about your approach into the school and breaching is always an issue, we have people inserted inside the school ready to respond,” he said.