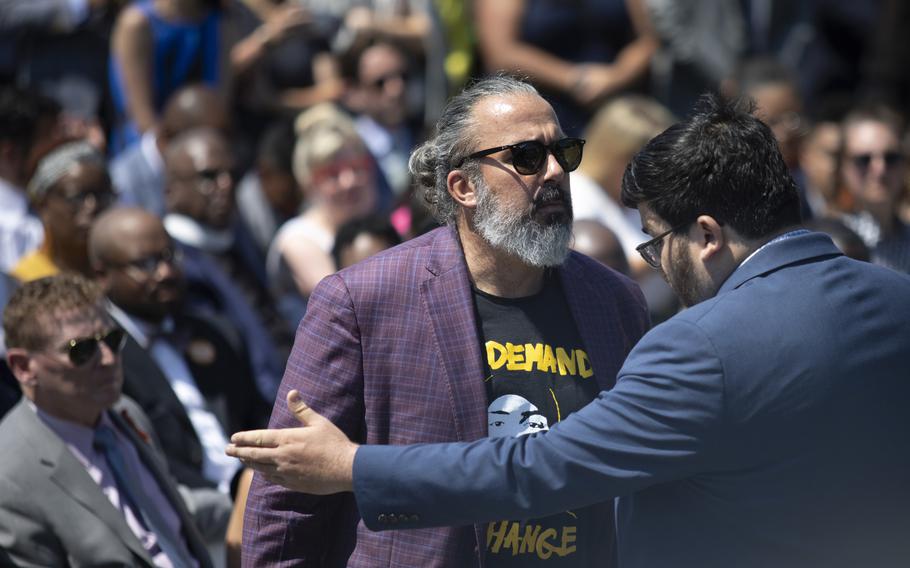 A White House staff member escorts Manuel Oliver from the audience during an event to celebrate the passage of the Bipartisan Safer Communities Act. Oliver's son died in the 2018 shooting in Parkland, Florida. (Tom Brenner/The Washington Post)

Nearly 4½ years after he lost his 17-year-old son to a gunman’s rampage at a high school in Parkland, Florida, Manuel Oliver did not think it was time to celebrate.

Oliver was among hundreds who joined President Joe Biden and lawmakers of both parties on the White House’s South Lawn on Monday at an event billed as “commemorating the historic achievement of the passage of the Bipartisan Safer Communities Act.” Invitees included family members and survivors of mass shootings from Columbine, Colorado, to Virginia Tech to Buffalo to Highland Park, Illinois.

Oliver, angry that children are still dying - including 19 at an elementary school in Uvalde, Texas, less than two months ago - decided to make his feelings known and stood up while Biden was speaking, wearing a shirt with his son’s photo and message demanding change.

Then he heckled the president.

“Despite the naysayers, we can make meaningful progress on dealing with gun violence,” Biden was saying as Oliver cut in to demand the creation of an office in the executive branch focused solely on gun violence.

“Sit down - you will hear what I have to say,” Biden said to Oliver, before pausing. “We have one - let me finish my comment.” But as Secret Service agents approached Oliver, Biden said, “Let him talk. Let him talk.”

Then he continued, “Make no mistake about it - this legislation is real progress. But more has to be done.”

The episode highlighted a tension that has run through Biden’s presidency and has intensified in recent weeks. Many Democrats have urged the president to do more to take credit for his accomplishments, from a strengthening economy to progress against the pandemic to getting bills through a polarized Congress. At the same time, Biden’s advisers are wary of seeming insensitive to voters’ concerns and suffering.

In the wake of the Uvalde shooting, Congress passed a bipartisan bill that was the biggest gun control measure in decades - but also fell far short of what advocates wanted. It expanded background checks, funded programs to seize guns from troubled individuals and bolstered mental health services.

Biden touted it Monday, saying, “The provision of this legislation is going to save lives. And it’s proof that in today’s politics, we can come together on a bipartisan basis to get important things done, even on an issue as tough as guns.”

Vice President Harris echoed the sentiment. “For 30 years, our nation has failed to pass meaningful gun violence legislation,” she said, adding, “Because of our president’s leadership and because of so many of you, we have passed a law that will make communities around our nation safer.”

Oliver said in an interview that he did not appreciate the congratulatory tone, “as kids are still dying.” He did not regret speaking out, he said after the ceremony. He just wished he had been able to continue talking before being escorted out.

“I’ve been trying to send a message to President Biden,” Oliver said. “Today I had the opportunity to be there. But I’m not going to be part of the celebration.”

In February 2018, a gunman opened fire on students and teachers at Marjory Stoneman Douglas High School in Parkland, slaughtering 17 people, including Oliver’s son, Joaquin. The mass killing launched a renewed surge of activism as students at the school pushed for tougher gun control measures, though that arguably did not yield significant results until last month.

Other family members had a different reaction at Monday’s event. Fred Guttenberg, who lost his daughter Jamie in the Parkland shooting, reported on Twitter that he had embraced Sen. John Cornyn, R-Texas, a longtime opponent of firearms restrictions who teamed up with Sen. Chris Murphy, D-Conn., to come up with the compromise that ultimately passed.

“I always promised that I would publicly embrace anyone on the right side of this legislation,” Guttenberg tweeted. “I am proud to say that I just gave @JohnCornyn a big bear hug.”

Other survivors and activists praised Oliver for sharing their thoughts. He wasn’t the only upset attendee, said Brandon Wolf, who was in the bathroom at Pulse Nightclub when a shooter entered the gay bar in Orlando, killing 49 people, including two of Wolf’s friends.

“I’m also angry,” he said. “I’m sad, I’m frustrated, because as we’re standing here talking people are still dying.” Referring to Oliver, he added, “If you are not that angry, then you are not doing enough yet.”

Igor Volsky, executive director of Guns Down America, which has also called for a gun violence prevention office, said that Oliver said “what every person in that event believed privately.” He cited polling that has shown how most Americans say they would like to see Congress pass another round of legislation to address gun violence.

The White House did immediately respond to a request for comment about Oliver’s comments.

Oliver’s demand for a gun violence office is not a new one. Eighty-five groups advocating for gun reform and violence prevention called for such an office to be created before Biden took office.

Still, many gun control advocates and lawmakers say the administration made significant strides with the bipartisan bill signed by Biden last month. The legislation, designed to prevent dangerous people from accessing weapons and to invest $15 billion in the mental health system and school security, is the first major federal gun revision in three decades.

Two people from Buffalo and Uvalde spoke at Monday’s event, praising the administration for what they said was progress in combating the gun violence that had torn apart their communities.

Garnell Whitfield Jr., the son of 86-year-old Ruth Whitfield, who died in a shooting at a Buffalo grocery store in May, recited the names of the 10 victims of that massacre, “all of whom went to the only supermarket in their community on May 14th to pick up groceries, believing that they were safe - but they were not.”

The store was in a Black neighborhood, and the alleged killer had declared himself a white supremacist.

“My family, our families and our community are devastated, but their intent to divide us and to promulgate further violence within our community has failed miserably,” Whitfield said. “For we have instead chosen to love over hate, to speak out rather than stay silent, and to stand with those courageous enough to lead us to the signing of the most impactful gun legislation in over 30 years.”

Biden has emphasized that he said he intends to keep pushing for more sweeping gun control measures, and he renewed his call Monday for a federal ban on assault weapons and high-capacity ammunition magazines.

“We’re living in a country awash in weapons of war,” Biden said. “Assault weapons need to be banned.”

Roy Guerrero, a pediatrician in Uvalde who treated several of the young shooting victims in that city, echoed the call for an assault weapons ban. Forty days after a gunman massacred two fourth-grade classes at Robb Elementary School, Guerrero said the makeshift memorials have been cleared and all that remains is “a hollow feeling in our gut.”

“I’m using this pain to speak to you today as a Uvaldian and to speak for the parents and victims who seek the truth, transparency and ultimately accountability,” Guerrero said. “Let this be the start of the movement towards the banning of assault weapons.”