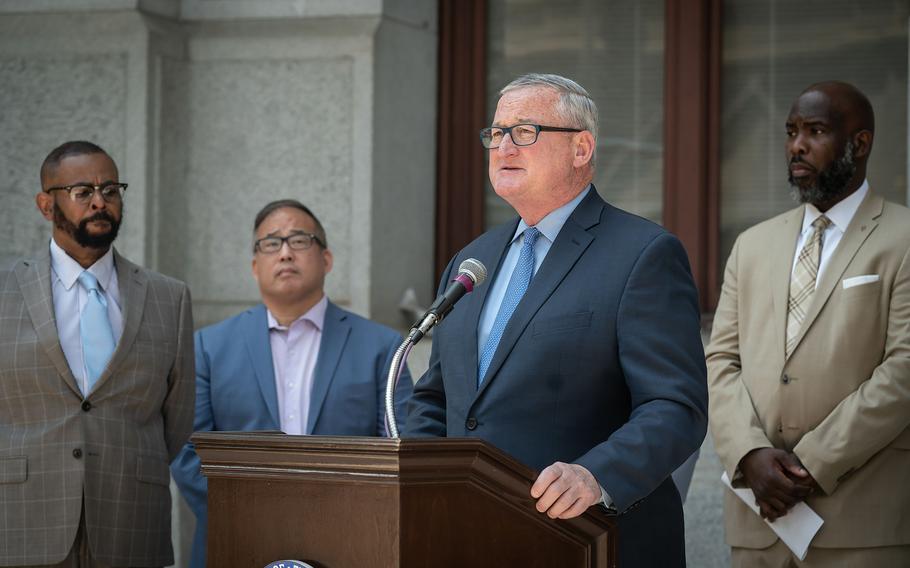 PHILADELPHIA — In response to the city's ongoing gun violence crisis and the shooting of two police officers at an Independence Day celebration, leaders in Philadelphia's City Council this week said it was time to reexamine the controversial police tactic known as stop-and-frisk.

"We have a lot of citizens in the streets of Philadelphia talking about 'When are we gonna look at stop-and-frisk in a constitutionally enacted way?'" said Council President Darrell L. Clarke.

Clarke's suggestion to revisit the practice — in which officers stop and sometimes search pedestrians or drivers over suspicious behavior — drew a chilly reception from Mayor Jim Kenney, who ran for office on a pledge to end illegal police stops.

The city's aggressive approach in the past had been criticized as racially biased and often legally groundless, and the mayor said Wednesday he was "not willing to bring that back," dismissing it as "just randomly going through (people's) pockets."

"Those were old police tactics that put us in a situation that kind of made a confrontation between our communities and our Police Department," Kenney said. "If (Clarke) could define what he's actually talking about, maybe we could have a conversation."

Such a conversation would surely be fraught with questions about how Philadelphia police interact with citizens and suspects, especially in communities of color.

And it would come amid a long-running debate over what some experts say is a general rollback in policing after the furor and protests that erupted across the country after the police murder of George Floyd — a response they cite as a key factor driving the national surge in violent crime. Others dismiss this idea of so-called de-policing and say that stops have typically resulted in few gun seizures while erecting a wall between officers and those they are sworn to protect.

While Clarke's proposal was short on specifics, he left some, including fellow Council members, puzzled — and quick to note that the Democratic lawmaker has led a legislative body keen on reining in similar police tactics in recent years.

Only last fall, City Council overwhelmingly approved a first in-the-nation law banning officers from stopping motorists for low-level infractions such as broken taillights or expired tags. Advocates said the move would reduce racial disparities in car stops (during one review period in 2019, nearly three-quarters of drivers stopped by city police were Black).

Councilmember Jamie Gauthier, a member of Council's progressive wing, said Clarke's trial balloon on stop-and-frisk was inconsistent with progress Council has made on police reform over the last two years.

"We've been on the right track in terms of limiting unnecessary interactions with police," she said. "Going back to a place where we have aggressive stop-and-frisk is in direct conflict with the trust that we say we want to build with the community."

Former New York Mayor Michael Bloomberg said the strategy was a key pillar in reducing that city's crime rate. But in 2013, a federal judge said Bloomberg's approach violated the constitutional rights of Black and Latino residents, calling it "a policy of indirect racial profiling." (At one point in Bloomberg's tenure, Black and Latino residents were nine times more likely to be stopped by police than white people.)

Shortly before Bloomberg's unsuccessful 2020 presidential run, he apologized for supporting the tactic.

In Philadelphia a decade ago, then-Mayor Michael Nutter also promoted the tactic. And its use — combined with other law enforcement strategies — coincided with the city's lowest murder rate in 50 years. At its peak during Nutter's last year in office in 2015, police made 820,000 stops — 375,000 of pedestrians and 445,000 of cars.

But the stops led to a federal lawsuit by the American Civil Liberties Union because officers were overwhelmingly stopping people of color, often without legal justification. Critics said police rarely arrested people they stopped, and even less frequently found guns. In 2020, police found a gun in less than 3% of all stops.

The lawsuit was resolved with an agreement between the city and the ACLU designed to make sure that police have sound legal suspicions to stop and search someone. Stops, especially of people on foot, have since plummeted. So-called ped stops are on track to fall below 10,000 this year, according to police statistics. Vehicle stops might hit 115,000 or so.

Council members, including Clarke, had previously applauded that curtailment. And while Clarke stopped short of calling for a return to specific targets for stops, he said he hears often from constituents who wonder what changed in policing between the Nutter years and today.

"You can't have a situation where people are afraid to have the conversation," Clarke said. He also suggested the tactic should be renamed to get past its "negative connotation."

Council Majority Leader Cherelle Parker — who is said to be considering a run for mayor next year and recently endorsed adding more police to the force — has embraced a similarly mixed stance.

In 2020, she championed a bill, symbolic in nature, that changed the City Charter to ban unconstitutional stops and frisks. This week, she said legal stops and searches were a necessary tool in the fight against violence — and insisted she saw no conflict between her two positions, or her belief in criminal justice reform.

"We are in the middle of a crisis," Parker said, "and we have to use every tool that we have to get illegal guns off the street."

Councilmember Isaiah Thomas, the architect of last fall's law to limit vehicle stops, said he'd be open to a conversation about how the Police Department handles pedestrian stops. But he said the department can't "move in a direction of violating people's rights" and then expect cooperation when a crime occurs.

"When you're talking about giving (police) the ability to say, 'You look guilty, hands on the wall,'" he said, "that's a slippery slope."

District Attorney Larry Krasner said there can be other consequences, too. Court cases built without legally sufficient probable cause, for example, will be tossed out, eroding citizen trust in law enforcement.

Some analysts contend police in many cities have recently pulled back from interacting with suspects because officers are fearful they will face discipline for making an honest mistake, or because they've grown resentful of a wave of protests calling for police to be defunded.

In one oft-quoted study, Paul Cassell, a law professor and crime specialist at the University of Utah, looked at data from five big cities, including Philadelphia, to compare the timing of protests with spikes in crime. In Philadelphia, Cassell charted shootings and homicides and found that they increased sharply after local demonstrations following the police murder of Floyd in Minneapolis in May 2020.

Citing a decline in "preventive strategies, such as street stops and anti-gun patrols," Cassell concluded that the "consequence of reducing law enforcement activity directed against gun violence has been, perhaps unsurprisingly, an increase in gun violence."

Cassell did not respond to messages seeking an interview last week. Last year, he told The Philadelphia Inquirer that police retrenchment was key to a national explosion in violence.

"What would cause an increase in these particular gun homicides and their cousin, gun violence, as compared to everything else?" he said. "The answer has to do with proactive policing, vehicle stops, pedestrian stops. Those are activities uniquely targeted to reduce gun violence."

But in Philadelphia, stops had been decreasing for years ahead of the 2020 civil unrest. And after that, officers still made an unprecedented number of gun arrests. Some analysts say increasing arrests for firearms reflect an active police force, not one in retrenchment.

In addition, experts cite a host of other factors that they say have driven the spike in violence: Gun sales nationwide hit record levels, ongoing pandemic lockdowns disrupted huge swaths of society, and the country was in the midst of widespread social and political unrest.

Philadelphia lawyer David Rudovsky, whose firm filed the lawsuit on behalf of the ACLU over the city's stop-and-frisk tactics, said Cassell's analysis was flawed.

"If you look at around the country where stop-and-frisk was not cut back, you still have a rise in crime," he said. "It's a simplistic response to genuine fear of crime and violence."

Returning to an era of stop-and-frisk, Rudovsky said, would be similarly problematic — and not a true solution to rising violence.

"To go back and stop thousands of people without reasons," he said, "rarely finding a gun, and losing the confidence of minority communities who won't cooperate with police in investigations, is self-defeating."