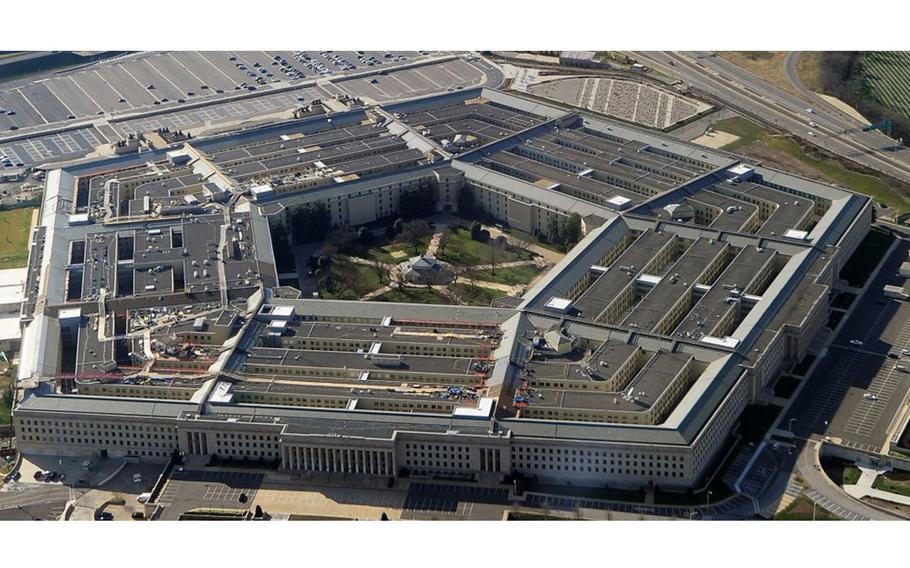 Defense Department appropriations legislation for the current fiscal year funded more than $58 billion worth of military projects that the administration did not request, according to a Pentagon report. (AFP via Getty Images/TNS)

WASHINGTON (Tribune News Service) — Defense Department appropriations legislation for the current fiscal year funded more than $58 billion worth of military projects that the administration did not request, according to a first-of-its-kind Pentagon report.

Lawmakers’ additions to the fiscal 2022 budget above the president’s request included money to respond to disasters and the war in Ukraine and other national priorities, but the extra money also bankrolled billions of dollars in weapons the military did not seek, such as more than $4 billion worth of unrequested warships, many of them built by the constituents of senior appropriators.

The June report has been posted on the Defense Department comptrollers’ website. The report was required by a provision in the fiscal 2022 National Defense Authorization Act, written by Rep. Elissa Slotkin, D-Mich. Now a new assessment of congressional funding hikes for fiscal 2023 would be mandated in the NDAA that the House plans to pass Thursday.

The funding boosts detailed in the report are part of publicly available congressional reports, and many have been covered in the press. But the report is unique in that it provides an official Defense Department record of how much Congress added in total — and where the money went.

Whether the $58.55 billion in congressionally inserted spending is justified is largely in the eye of the beholder. Few would argue with the need for spending some of it. Yet a substantial portion of the money goes for programs of arguable utility to the U.S. military, critics say.

“Certainly Congress has the power of the purse, but considering the Pentagon got more than $750 billion that year, lawmakers could work within that generous budget to reflect their priorities,” Steve Ellis, president of Taxpayers for Common Sense, a government spending watchdog group, said via email. “Instead they dumped more than $50 billion across accounts for what appear to be in some cases very parochial interests.”

The Pentagon budget request did not include any of the $58.55 billion in programs. And in many cases, the additions were not even on the so-called unfunded priorities lists that top officers and department officials send to Congress each year to cover items that did not make the budget but that the services and some defense agency heads say are nonetheless important. Some refer to these documents as “wish lists.”

Of particular note are at least a half dozen ships worth in excess of $4 billion that Congress bankrolled in fiscal 2022 — vessels that were not even on the unfunded priority lists, let alone the official budget request. In some cases, the ships are in the Navy’s future plans, but Congress insisted the service buy them sooner.

Many of these vessels are built in or near the states and districts of top appropriators, such as Richard C. Shelby of Alabama, the top Republican appropriator in the Senate.

— $1.8 billion to begin buying a third destroyer that appropriators said was required under contract and parts for future destroyers.

— $590 million for an expeditionary fast transport ship, which is a high-speed cargo ship.

— $577 million for an expeditionary sea base, a logistics platform.

Besides the ships, the report identifies other hefty plus-ups, as such increases are known in defense circles. None of this money either was sought in the budget, and the vast majority of it was not even requested on the services’ wish lists.

Appropriators provided $900 million for a dozen Super Hornet fighter jets for the Navy and several hundred million more for other types of aircraft in all the services, plus $460 million for Air Force development of advanced jet engines.

And another $2 billion-plus was appropriated for classified programs above the level the Pentagon formally sought.

The $58.55 billion for unrequested defense projects in fiscal 2022 is the sum of individual additions totaling $20 million or more apiece. Because many spending hikes are reckoned in single-digit millions of dollars, the actual grand total of congressional additions is certainly higher.

The $58.55 billion total amounts to nearly 8 percent of the Defense Department’s fiscal 2022 base budget appropriation of $742.3 billion.

That pot of Pentagon money includes a more than $25 billion increase for the department that was agreed to by Congress earlier this year and signed into law in March by President Joe Biden.

On top of the $742.3 billion for the Defense Department’s base budget in fiscal 2022, appropriations laws contained $14.3 billion more for responding to emergencies, including the U.S. military pullout from Afghanistan, the war in Ukraine and a massive leak of Navy jet fuel into drinking water in Hawaii.

Disasters aside, the Pentagon’s base budget has grown 48% from fiscal 2017 until this year, far exceeding the rate of inflation.

The NDAA now being debated on the House floor would add $37 billion to the amount the president requested for all national defense programs, mainly, but not exclusively, at the Pentagon.

On Wednesday, the House rejected an amendment by California Democrat Barbara Lee to subtract that $37 billion. And the House soundly defeated another Lee proposal to take away $100 billion from the authorized level.

The Pentagon budget “is running amok,” Lee said during the floor debate.

The House also rejected an amendment by Washington Democrat Pramila Jayapal to make the unfunded priorities lists optional, not mandatory.

Mike D. Rogers of Alabama, the top Republican on the House Armed Services Committee, argued that Congress needs the lists to know what the military really needs, as opposed to what the administration chooses to afford.

“The fact is: The president proposes budgets, we write budgets,” Rogers said on the floor Wednesday.

But the lists have become a de facto part of the defense budget, expanding it each year in a way most other departments and agencies do not.

The congressional increases to the defense budget are “a product of the self-licking ice cream cone that is the services’ Unfunded Priorities Lists, a veritable menu of spending not included in the budget request that lawmakers can point to and say the Pentagon wants it,” said Ellis.

The new Defense Department report shows how Congress frequently adds money not just for programs on the wish lists but also for many that are not even requested there.

Many billions of the dollars Congress added in fiscal 2022 are for programs that few observers would contest.

These include, for example, money to help Ukraine fight Russia and just over $1 billion for the Red Hill fuel storage facility in Hawaii, much of which was allotted to deal with fuel leaks into local drinking water supplies last year.

Another nearly $1.5 billion appears to have been spent to meet rising fuel costs. And several hundred million dollars went to medical research into cancer and other diseases.

The new Pentagon report does not say which programs were subtracted to make room for the nearly net $30 billion or so in congressional priorities that were not paid for by the $25 billion-plus addition to the topline. Appropriators pointed out in March that they were able to save billions of dollars due to the halt in funding Afghan security forces and billions more as the result of making cuts, known as rescissions, in programs funded in prior years.