Mexican researcher gets 4 years in prison for spying for Russia in Fla. 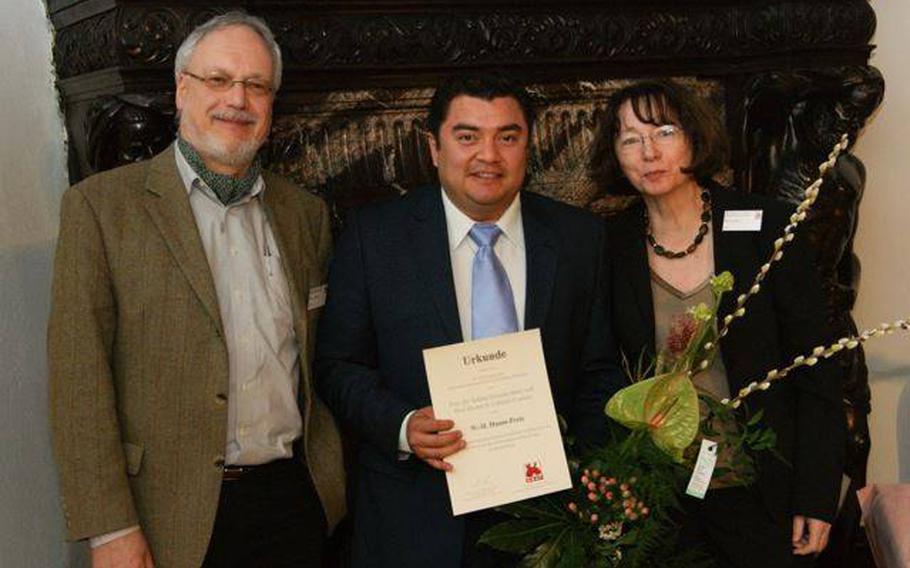 This undated photo shows Hector Alejandro Cabrera Fuentes, center. Fuentes, an internationally renowned Mexican researcher, was sentenced to four years in federal prison for espionage. The sentencing Tuesday came after a high-ranking U.S. military official said this year that Russia has more military intelligence agents in Mexico than in any other country. (Facebook)

An internationally renowned Mexican researcher was sentenced to four years in federal prison in a case that sent shock waves through Mexico.

Prosecutors said Hector Alejandro Cabrera Fuentes, 36, born and raised in southern Mexico, was recruited by an alleged Russian government official to gather information about an informant living in Florida, a mission that involved one of his wives and a license plate.

The sentencing Tuesday came after a high-ranking U.S. military official said this year that Russia has more military intelligence agents in Mexico than in any other country.

A federal judge for the Southern District of Florida ordered that Fuentes be deported to Mexico “promptly upon his release,” the Justice Department said in a news release.

Fuentes pleaded guilty in February and admitted violating a law that requires individuals to notify the Justice Department that they are working as an agent for a foreign government, in this case Russia, and faced a maximum sentence of 10 years.

Fuentes’s attorney, Ronald Gainor, said Wednesday that the sentence was “fair” and that prosecutors took into account Fuentes’s “charitable activities and scientific achievements.”

“Dr. Cabrera is a talented scientist and a long-standing philanthropist in Mexico,” he told The Washington Post. “We are looking forward to him going back to Mexico to continue with this cutting-edge work.”

Gainor said he expected that his client will be sent back to Mexico within less than a year, given that he has already spent 28 months in prison since his arrest in 2020.

Mexico’s Foreign Ministry did not immediately respond Thursday to a request for comment.

Fuentes, who has two doctorates, was known for his research on treatment to regenerate burned skin, as well as the development of a technique to prevent cellular death after a cardiac arrest, according to media reports.

He was also highly esteemed in Mexico for his philanthropic work in his native state of Oaxaca, one of the country’s poorest.

Prosecutors said Fuentes followed orders from the Russian official to have an intermediary lease an apartment in a residential building in the Miami area, where he could gather information about the informant, who had in the past provided information about Russian intelligence activities to the U.S. government.

Under the instruction of the same Russian official, Fuentes traveled to Miami in February 2020 to obtain the license plate number and parking location of the informant, who was living at a condominium complex. He would provide this information to the Russian official upon his next trip to Russia.

Fuentes’s communication with the Russian official was “consistent with the tactics of the Russian intelligence services for spotting, assessing, recruiting, and handling intelligence assets and sources,” the Justice Department said.

During this trip, Fuentes asked his wife, who was traveling with him, to take a photo of the informant’s car parked in the Miami-area condominium.

Fuentes aroused suspicion when a security guard noticed him tailgating another vehicle to get access to the condominium. When the guard stopped and questioned the couple, his wife got out of the vehicle and took a picture of the informant’s license plate.

Two days later, they were detained at Miami International Airport, where they had planned to board a flight to Mexico City. U.S. Customs and Border Protection inspected his wife’s phone and discovered “a close-up image of the license plate” of the informant’s car in a folder of recently deleted photographs, according to a criminal complaint.

According to the news outlet El País, Fuentes made a final plea for forgiveness Tuesday, moments before Judge Donald Middlebrooks announced the sentence.

“We all make mistakes in life, and this is the biggest mistake of mine,” he said in a short statement moments before the judge announced his ruling.

When interviewed by FBI agents after his arrest in 2020, according to the complaint, the Mexican scientist described having repeated contact with a person he believed worked for the Russian government. The Russian official had first contacted and recruited him a year before.

Fuentes resided in Singapore, where he worked as a researcher at the National Heart Center, but traveled repeatedly to Moscow, where he had a second wife and two daughters who were having difficulty getting government permission to travel outside of the country.

In one of their meetings, the Russian official brought up Fuentes’s family’s inability to leave Russia and told Fuentes that “we can help each other,’” the complaint said.