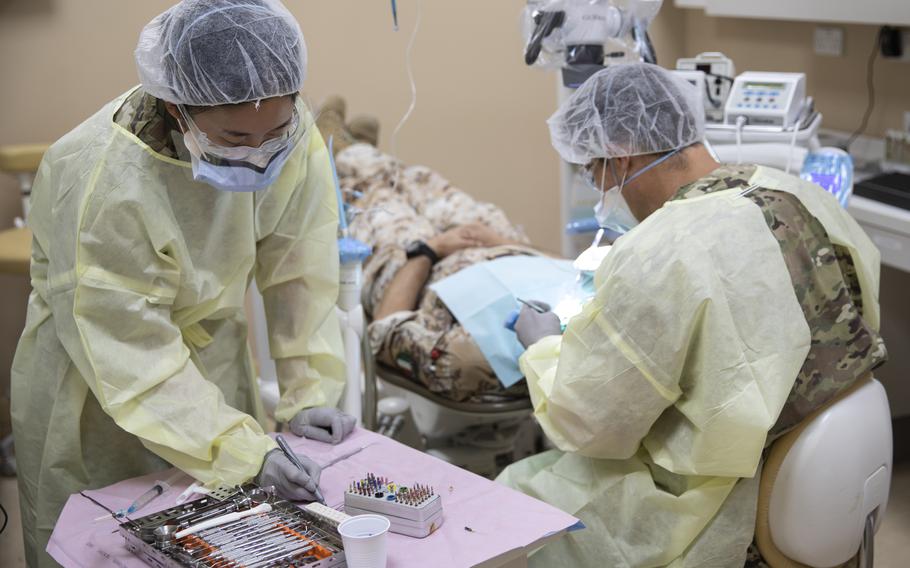 Two members of the House Armed Services Committee introduced a bill Thursday aimed at tackling one of the largest issues the National Guard and military reserves face in ensuring their troops are medically cleared to deploy — their dental health.

The Dental Care for Our Troops Act, introduced by Reps. Andy Kim, D-N.J., and Trent Kelly, R-Miss., would provide cost-free access to dental care for members of the National Guard and the Army, Navy, Marine and Air Force reserves, according to a summary of the bill. The legislation is an extension of the Healthcare for Our Troops Act that Kim and Kelly introduced in the House last year. That bill seeks to provide Guard and Reserve troops free medical insurance akin to what active-duty troops receive.

“When I speak with National Guard members, reservists, and military support organizations, they tell me that access to affordable dental care is a concern for them, and that dental issues are a top reason reservists are found unfit to deploy,” Kim said in a statement issued Friday. “With this bill, we’re making sure that all National Guard and reservists have access to premium-free TRICARE for dental.”

Under current law, Guard and Reserve troops typically only receive military-issued medical and dental coverage while on active-duty orders for 30 days or more. Kim and Kelly have spent more than a year attempting to expand free coverage through TRICARE — the military’s health insurance provider — to all National Guard and Reserve troops regardless of their duty status.

Their initial bill, introduced in May 2021, was meant to address the roughly 130,000 U.S. troops serving part-time roles in the National Guard and reserves who lack private medical coverage, typically issued through their civilian employers. Not all Guard members have full-time civilian work that provides health insurance.

Staff members for Kim and Kelly said the lawmakers hope the Healthcare for Our Troops and Dental Care for Our Troops acts will be tacked onto the forthcoming fiscal 2023 National Defense Authorization Act, the annual bill that establishes Congress’ spending and policy priorities for the Pentagon. The lawmakers said expanding free health and dental care to Guard and Reserve troops were among their “top priorities” as the House takes up the critical legislation next week.

“Our men and women in the Reserve and National Guard component stand at the ready to defend America at home and across the world,” said Kelly, a major general in the Mississippi Army National Guard who has served 36 years. “It is our duty as members of Congress to ensure they have access to preventative and continuous dental care – just as we do for active-duty military personnel.”

Pentagon leaders have long identified dental health as one of the top culprits that keeps troops from being able to deploy. The military requires service members to receive annual dental screenings to be certified deployable. While National Guard members and Reserve troops can receive a voucher to pay for their annual exams via the Reserve Health Readiness Program, those troops must pay for any other dental care out of their pocket.

Since the war in Afghanistan was launched in the wake of the Sept. 11, 2001, terrorist attacks, some 20% of Guard and Reserve troops have been marked nondeployable at some point during their service for dental issues, according to a summary of the new bill. Another 15% have been separated from the military for dental problems, the summary said.

“Without affordable dental coverage, National Guard and Reserve members face barriers to maintaining comprehensive health which is a prerequisite to readiness,” retired Air Force Lt. Gen. Dana Atkins, the president and CEO of MOAA, said in a statement Friday. “MOAA thanks [Reps.] Andy Kim and … Trent Kelly for introducing this bill that would bring the Reserve component dental benefit on par with active duty and facilitate access to care. Our nation counts on Reserve component members to respond when our nation needs them – we must support them with affordable dental care to ensure their readiness.”