(Tribune News Service) — California officials have agreed to pay out $51 million to settle some of the claims stemming from the 2018 shooting at the Yountville Veterans Home, where a gunman and former patient killed three women staffers before shooting himself, according to state budget documents.

The settlement “authorizes $51 million one-time to pay for settlement costs at the Veterans Home of California, Yountville related to the 2018 shooting,” according to state budget documents approved by the legislature this week.

Ronald Foreman, the attorney for the family of Dr. Jennifer Golick, a 42-year-old therapist killed by the gunman, said the settlement “is the first step in a long journey” and that other lawsuits over the incident are pending.

“That’s the first step in getting them compensation for the horrible tragedy they suffered on March 9, 2018, and continue to suffer,” Foreman said.

Officials with the California Department of Veterans Affairs said they were working to respond to email queries from The Bee regarding which lawsuits the settlement covers.

The shooting has sparked wrongful death lawsuits, including at least two filed in federal court in San Francisco by the Golick family and the family of Christine Loeber, 48, a director at the home who also was killed. Those suits are pending, according to court records, and Foreman said another case against the Napa County Sheriff’s Department is pending in an appellate court.

A third victim was Jennifer Gonzales Shushereba, 29, a clinical psychologist who was seven months pregnant.

Officials have said the March 9, 2018, shooting was conducted by Albert Cheung Wong, a 36-year-old former Sacramento resident and Army veteran who had served in Afghanistan and was suffering from severe mental health issues and PTSD.

Wong became a patient at The Pathway Home, a residential treatment center at the state veterans home where Golick had been the clinical director for seven months, in April 2017, court papers say.

About 1,000 aging and disabled veterans live at the home, which is ringed by wineries in scenic Napa County. It’s considered the crown jewel among the state’s eight veterans homes. Wong did not live there, but received treatment from the Pathway program.

On Dec. 20, 2017, Wong was hospitalized with a 5150 mental health hold at the San Francisco VA Medical Center, “where he expressed homicidal thoughts toward decedent Jennifer Golick,” court papers say.

Wong also “reported possession of multiple firearms immediately prior to his hospitalization and the ability to access firearms were he to be released from the hospital,” court papers say.

Despite that, he was released from the psychiatric ward after two days.

On Feb. 14, 2018, Wong purchased a Stoeger double barrel shotgun from a Napa sporting goods store, waited the 10-day waiting period and picked up the weapon on Feb. 25, according to a California Highway Patrol investigation.

While he was waiting, on Feb. 23, Wong bought a JP Enterprises Ultralite .308 caliber assault style rifle at a Burlingame gun shop, waited out the 10-day waiting period and picked it up March 5, four days before the shootings.

No one reported Wong’s 5150 hold or his threats while he was on the 5150 hold to law enforcement, which could have prohibited him from purchasing weapons, court papers say.

“At the time, Wong expressed homicidal thoughts toward specific individuals associated with the Pathway Program, including Jennifer Golick,” court papers say. “Wong also expressed suicidal intent with a plan to shoot and kill himself.

A Napa County District Attorney’s report found that Wong had been tossed out of the Pathway Home on Feb. 20 “due to his refusals to comply with program policies and treatment plan.”

“Wong had expressed extreme anger and frustration toward the clinical staff due to many prior disagreements and his recent discharge from the program,” the report found.

The CHP and D.A.’s investigation of the shooting concluded that, after searching online for information on murder and suicide, Wong arrived at the home at 10:18 a.m. armed with both weapons, extra ammunition and 20-round magazines and ear and eye protection.

Law enforcement responded to 911 calls of an “active shooter” and Napa sheriff’s Deputy Steven Lombardi confronted Wong as Wong took the women hostage in a group room, engaging in a gunfight.

“Deputy Lombardi fired a total of 13 rounds from his .223 caliber rifle at Wong during the shooting sequence which lasted approximately 10 seconds,” according to the D.A.’s report, which ruled the deputy’s use of force to be “reasonable and lawful.”

“Wong fired a total of 22 rounds from his .308 caliber rifle toward Deputy Lombardi during the shooting sequence,” the report added.

Wong then shot the victims with the rifle and shot himself in the head with the .12-gauge shotgun, the CHP report said. Lombardi survived the shootout. He retired in late 2020, according to the Napa County Sheriff’s Office.

Foreman said that by the time the deputy arrived the situation had become a hostage/barricade situation and that the suit against the sheriff that is pending stems from the claim that “the deputy shot blindly through the door” and sparked the killings of the victims. 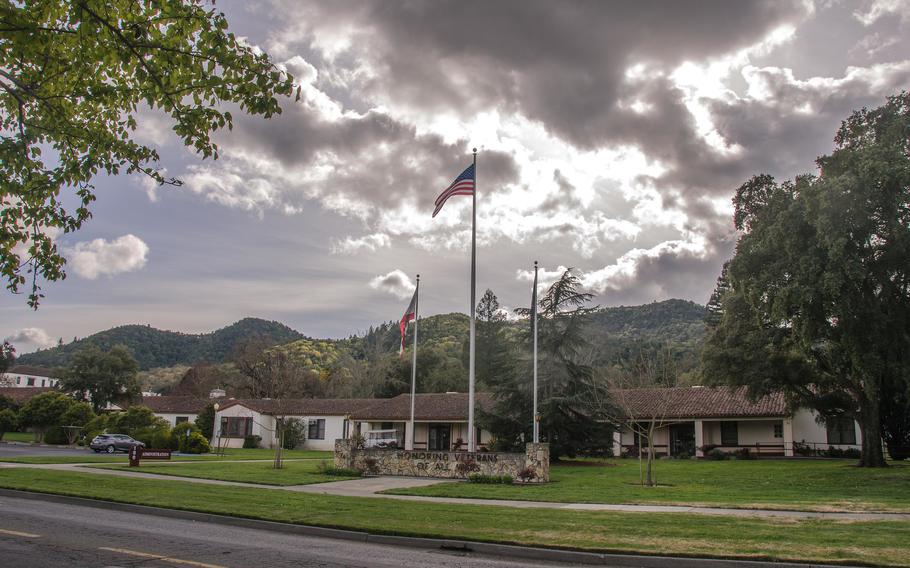 California officials have agreed to pay out $51 million to settle some of the claims stemming from the 2018 shooting at the Yountville Veterans Home, where a gunman and former patient killed three women staffers before shooting himself, according to state budget documents. (Wayne Hsieh/Flickr)