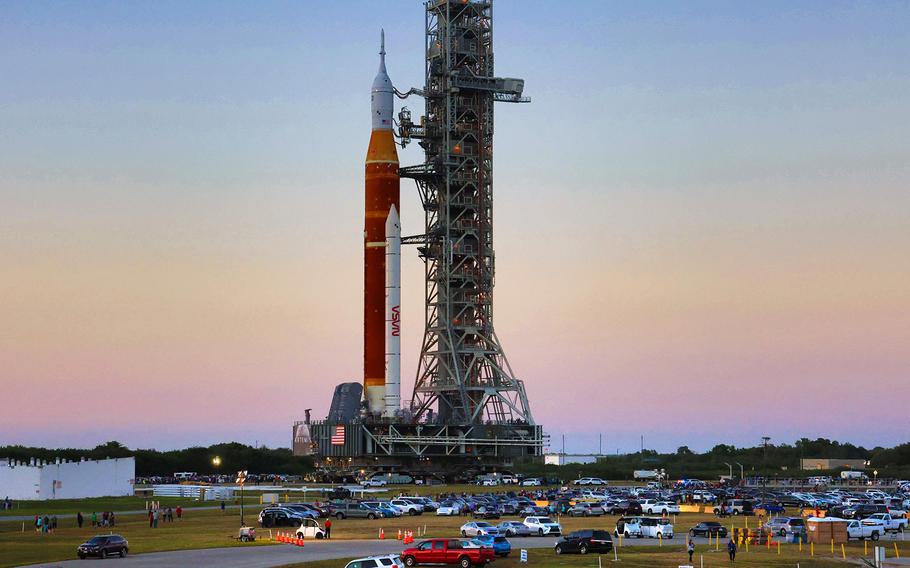 For years NASA has struggled with ballooning costs of the rocket and spacecraft it wants to use to send astronauts to the moon. Now, it's got significant problems with an obscure, but vital, piece of hardware used to transport and launch the rocket: a tower of scaffolding known as a mobile launcher.

In a scathing report issued Thursday, NASA's inspector general said that a second version of the mobile launcher, needed to accommodate a taller version of the rocket, is expected to cost at least $1 billion — more than two times the original contract value that NASA awarded in 2019. The IG said it would take an additional 2 1/2 years to build.

NASA already has built a mobile launcher for its Space Launch System rocket, at a cost of $668.7 million. That program also suffered enormous cost increases after NASA's Constellation program was canceled, meaning the agency had to redesign the tower to fit a different rocket, the SLS.

But that mobile launch tower will have to be replaced after just three missions because NASA plans to use a different version of the SLS, one with a more powerful upper stage that would extend the rocket's height by some 40 feet, for later trips to the moon in its Artemis lunar campaign. The later version of the SLS will be capable of delivering 40 percent more payload to the lunar surface.

The added launch tower expense and expected delay was just one of a host of problems the IG identified with the program. It laid most of the blame on the contractor, Bechtel, for its "poor performance" and "underestimation of the ML-2 project's scope and complexity." ML-2 is short for mobile launcher 2.

Bechtel officials told the IG that a portion of the cost increase was due to the coronavirus pandemic. Bechtel went through multiple leadership teams and had significant turnover. At one point, according to the IG report, company officials told NASA that they are "not designers and do not normally perform these kinds of designs."

In a statement, Bechtel spokesman Fred deSousa said that the company is "committed to successfully delivering" the launcher.

"The project has experienced significant cost and schedule growth beyond the original good faith estimates, which did not appreciate the project complexity and necessary change resulting from parallel design evolution of all launch systems," he said. "Unfortunately, the Inspector General's report does not provide a complete picture of what led to the current situation, and we strongly disagree with the report's overarching conclusions on the primary causes of the cost increases."

The IG also found that "NASA's management practices contributed to the project's cost increases and schedule delays." The space agency, for example, awarded the contract to Bechtel before the final design for the rocket's enhanced upper stage had been finalized.

The report also said that despite Bechtel's lackluster work, NASA awarded the company $8.2 million in awards meant for good performance.

The cost overruns could continue, the IG warned, because NASA has already spent $435.6 million on the project and construction has yet to begin. It said that an analysis found only a 3.9% confidence level in the $1 billion price tag, and that it could grow to $1.5 billion.

The SLS rocket to be used in the first Artemis mission is currently back on the launchpad at the Kennedy Space Center, where it is scheduled to go through a series of fueling and countdown tests for a second time.

An earlier test was cut short after NASA discovered a malfunctioning valve in the rocket's second stage and a leak in one of the fuel lines. NASA hopes to launch the Orion spacecraft in orbit around the moon, without any people on board, sometime later this year.