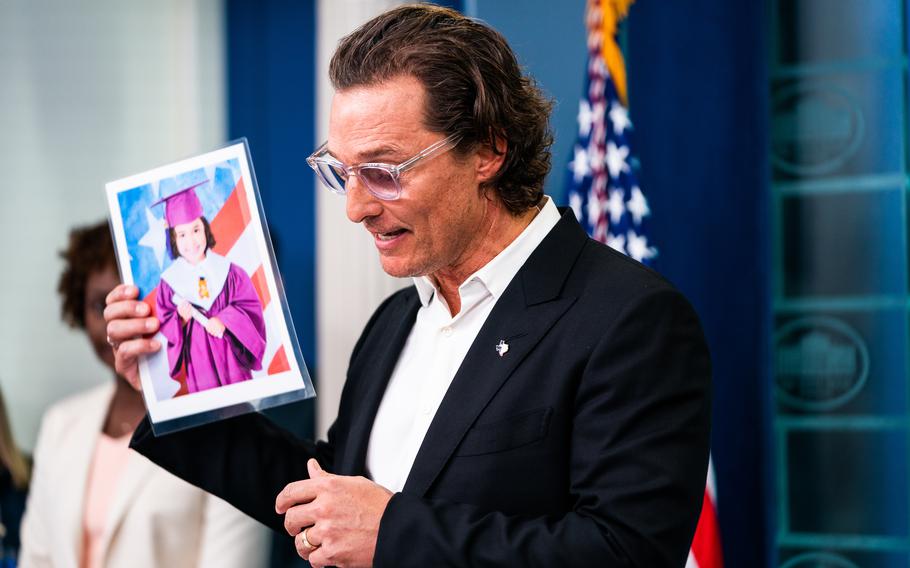 Actor Matthew McConaughey holds an image of Alithia Ramirez, 10, who was killed in the mass shooting at an elementary school in Uvalde, Texas, as he speaks during the White House daily press briefing on June 7, 2022. (Demetrius Freeman/Washington Post )

McConaughey emotionally told the stories of the 19 children and two teachers killed by a shooter at an elementary school in the small South Texas city on May 24. He said he and his wife, Camila Alves, spent most of past week with the victims' families in his hometown.

"You know what every one of these parents wanted, what they asked us for? What every parent separately expressed in their own way to Camila and me? That they want their children's dreams to live on," McConaughey said. "They want to make their loss of life matter."

The actor then called on lawmakers in Washington to take action on gun control as they try to forge a bipartisan congressional response to recent mass shootings.

Lawmakers, he said, have a window of opportunity now to pass meaningful gun-control measures. The actor called for the creation of a waiting period for purchasing AR-15 rifles, as well as for raising the minimum age for purchasing that type of weapon to 21. He also called for universal background checks and "red flag" laws.

Gun responsibility, he said, is something most Americans "agree on more than we don't."

"This should be a nonpartisan issue," McConaughey said. "That should not be a partisan issue. There is not a Democratic or Republican value in one single act of these shooters."

The actor told reporters that his mother taught kindergarten less than a mile from Robb Elementary School, the scene of the shooting. Uvalde, he said, is the town where he "learned responsible gun ownership."

Going back to his hometown in the wake of the shooting, he said, was shocking.

"You could feel the pain, the denial, the disillusion, anger, blame, sadness, loss of lives, dreams halted," he said.

He said parents of the victims shared stories of their children's dreams. One of the little girls killed, Maite Rodriguez, wanted to be a marine biologist, McConaughey recalled.

"Maite cared for the environment so strongly that, when the city asked her mother if they could release some balloons into the sky in her memory, her mother said 'Oh no, Maite wouldn't want to litter,'" he said.

Maite, McConaughey said, wore green high-top Converse shoes "with a heart she had hand-drawn on the right toe, because they represented her love of nature." Alves, sitting nearby McConaughey in the briefing room, showed a pair of the shoes.

"These are the same green Converse on her feet that turned out to be the only clear evidence that could identify her after the shooting," McConaughey said.