Philadelphia hosts a robot lollapalooza, showing off devices that fly, swim and enter the body 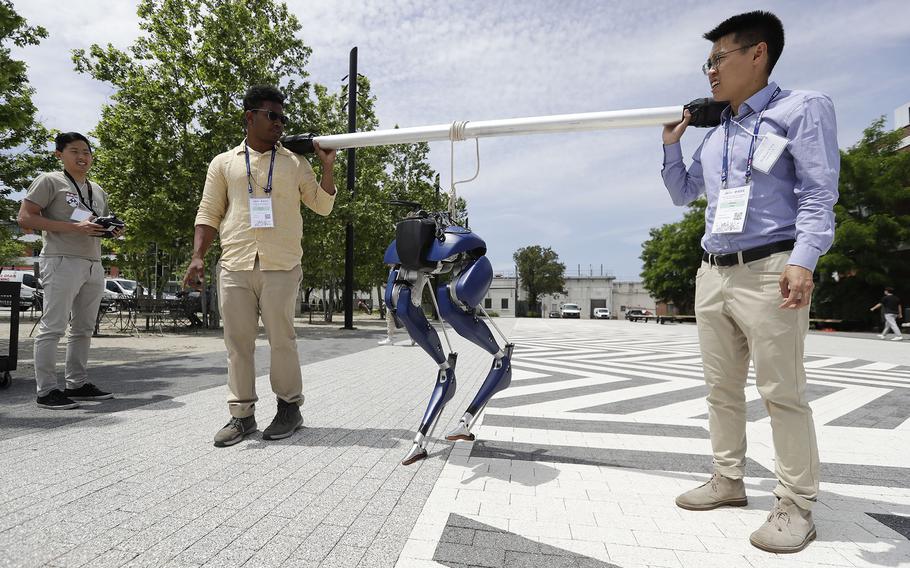 PHILADELPHIA (Tribune News Service) — The robots are here. An eagle-sized quadcopter flew above a wooded Schuylkill river bank, counting trees as it was designed to do in the forests of the Andes.

Other robots swam underwater, where their hoops of mesh-like material billowed like jellyfish as they took pictures or searched for watercraft.

Still others swarmed like mosquitoes, reading the landscape with GPS to find landing targets. Or they were seen wheeling and running, on four legs and two, as if practicing to further automate Amazon’s warehouses.

The glory of robots in action was on full display last week in the halls and parking lots at Pennovation, the former paint factory that houses the University of Pennsylvania’s engineering labs. Robots of various stripes and sizes also appeared at the Penn medical school, the nearby Singh Center for Nanotechnology, and the Pennsylvania Convention Center.

Penn students, professors and business partners — along with the world’s top robotic researchers and key companies — were showing off dozens of their creations for the International Conference on Robotics and Automation, a yearly conclave organized by the Institute of Electrical and Electronics Engineers based in New York City. About 4,500 guests from 89 countries have filled city hotels for the robot lollapalooza. And that’s not counting remote viewers of the group’s first in-person conference since the pre-pandemic year 2019. 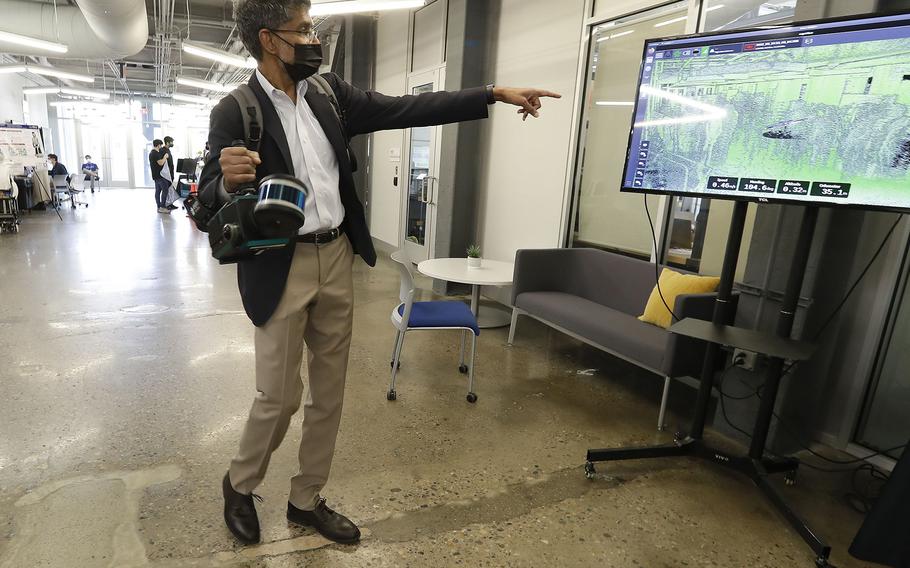 University of Pennsylvania Dean for the School of Engineering & Applied Science Vijay Kumar points to a television screen using the ExynPak, a portable, real-time 3D mapping solution with survey grade accuracy. Kumar was leading a tour of the Penn Engineering and Applied Sciences of General Robotics, Automation, Sensing and Perception Lab (GRASP) at the Pennovation Center on May 23, 2022. (Yong Kim, The Philadelphia Inquirer/TNS)

The show was first held in Philadelphia in 1988, and only returned this week larger than ever, said Vijay Kumar, Penn’s engineering school dean and past head of its General Robotics, Automation, Sensing & Perception (GRASP) Lab.

This conference has 96 industry partners, pledging $868,000, a record amount, an IEEE spokesman said. The companies include warehouse operators led by Amazon, car makers such as Toyota, construction and farm equipment makers such as John Deere, and automation software developers such as Nvidia and Shield AI, Kumar said.

A global outlook is much in evidence. The 54-member host committee, mostly professors, includes 24 from universities in Europe, Asia, Africa, Canada, and Australia.

The U.S. market for robotics is $80 billion and growing by a robust 18% a year. “Robotics has become a fundamental discipline in engineering education,” said Kumar, who co-chaired the event with Penn engineering professor George J. Pappas. “You have hardware and software levels. You drew integration from nature.”

The popularity of the Penn robotics lab, founded in 1979, helped Penn double its current roster of doctoral engineering students to about 800 since the mid-2010s, Kumar said. He credited the U.S. Army Research Laboratory, based in Maryland, for encouraging its many private contractors to support university research.

Companies hire students, and take direct equity positions in professors’ and graduate students’ start-ups. Qualcomm bought Kumar’s own robotics firm, KMel Robotics, in 2015. Qualcomm and Nvidia fund his research, which has given birth to a string of start-ups, including South Philly mine-mapper Exyn Technologies, and Pennovation-based IQ Motion Control, which makes smart motors. 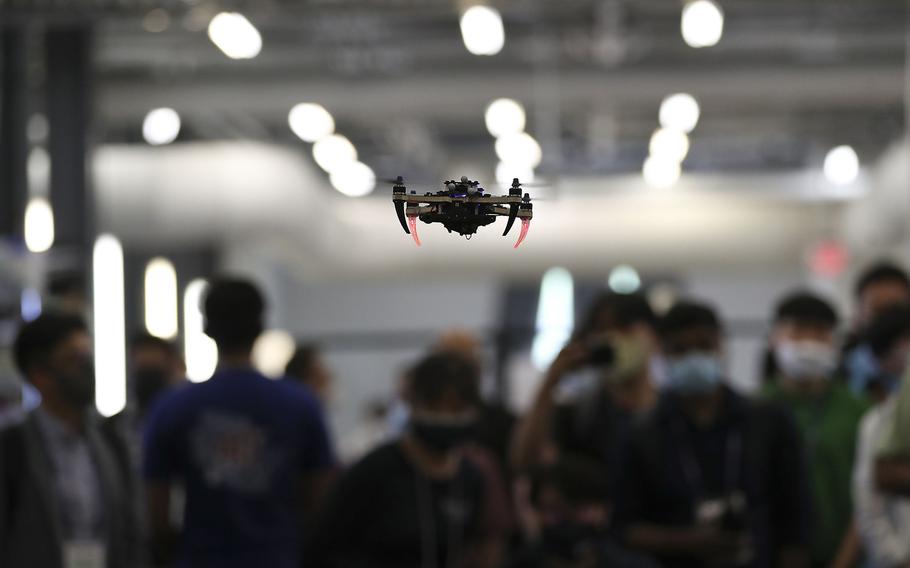 A drone flies during a demonstration in the Decentralized Planning with Shared Semantic Representation for Multiple Robots during the Penn Engineering and Applied Sciences of General Robotics, Automation, Sensing and Perception Lab (GRASP) Technical Tours at the Pennovation Center on May 23, 2022. (Yong Kim, The Philadelphia Inquirer/TNS)

The scene at Pennovation

The Pennovation parking lots looked like a dog park from a Marvel superhero movie, with sturdy pet-like quadruped robots — and even some human-like bipeds — marching and responding to kicks from their operators to demonstrate their ruggedness.

“This one is water-resistant for half an hour. It has reversible motors, and is not camera-dependent [to sense what surrounds it],” so it can stay balanced without being told how to respond by a human operator, said Avik De, chief technology officer of Ghost Robotics at Pennovation.

“It can do nine kilometers in three hours on one charge. It is full-sealed, so you can use it in the swamp,” De added. “It uses components you can buy off the shelf,” in line with a keep-it-simple ethic cited by many of the Penn robot developers. It could be used for security in a remote environment, and routine patrol inspections.

Robotics means business, and that business has often been war.

The program’s master’s degree graduates include Selçuk Bayraktar, now the son-in-law of Turkish strongman President Recep Tayyip Erdogan. Bayraktar’s Penn and MIT studies in robotics helped prepare him to build the military-products maker that mass-produces the lethal, low-cost drones that Turkey and its allies have used to kill Armenian, Kurdish and Syrian fighters from a distance.

His last name has also become a popular folksong in Ukraine, where Bayraktar TB2 drones have been credited with slowing the Russian invasion.

Some Penn roboticists are uncomfortable with the moral problem of their work being applied for killing. Bioengineering senior lecturer Brittany Shields addresses many of those issues in a required course on the ethics of robotics. 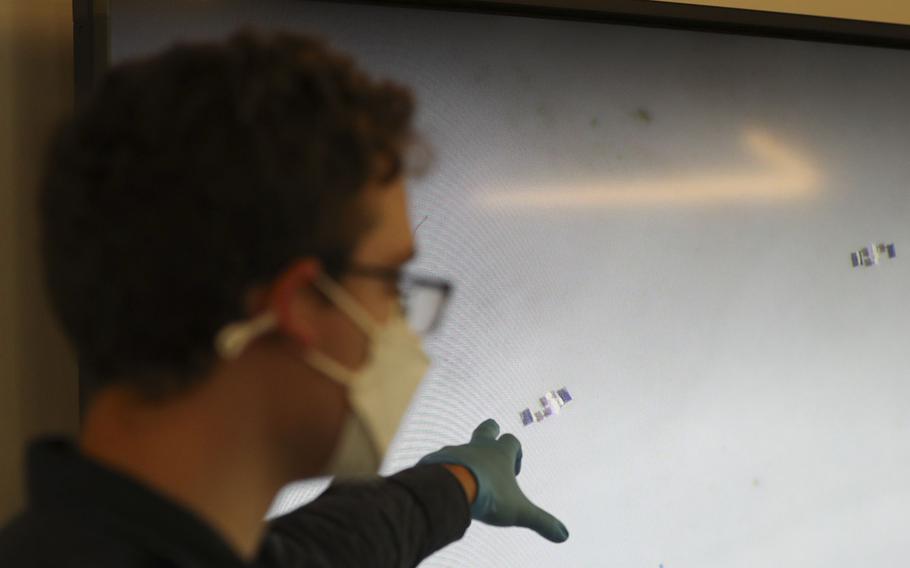 Doctoral student Lucas Hanson points to CMOS Integrated, Sub-1mm Robots, that is shown from a microscope, during the Penn Engineering and Applied Sciences of General Robotics, Automation, Sensing and Perception Lab (GRASP) Technical Tours at the Pennovation Center on May 23, 2022. (Yong Kim, The Philadelphia Inquirer/TNS)

Other robots on display are intentionally delicate. Penn doctoral student Dongsheng Chen’s diving robots, with side panels enlarging and closing like jellyfish, were inspired by origami, the Japanese art of folding paper.

Another Penn doctoral student, Gedaliah Knizhnik, prepared a mini-quad-copter to land in a pool-sized water tank, where five floating mini-docks had assembled autonomously to receive it, aided by magnets. “These are very simple ‘bots,” he explained. “Manufacturers who develop a product for this application usually assume it has to go in any direction” and install multiple motors and complex controls.

“But those are subject to failure,” especially in watery conditions, he said. “One-motor boats with simple flippers can do it, and just ride the flow for most of their observation period. You can save more than 70% on energy.”

Indeed, many of the robots on display made a virtue of simplicity. The Piccolissimo 2 drone — drawn from the Italian word for “smallest” while honoring the name of developer Matt Piccoli — is small enough to fit in a child’s palm, and uses a single actuator to respond to stimuli — a lighthouse beacon or an air current.

It can be used for search-and-rescue or area patrols, said team head Drew Curtis. A team of cheap Piccolissimo 2 drones could “swarm” a target, like a flock of hummingbirds.

“Event-based cameras” use LiDAR — Laser Detection and Ranging — instead of traditional light accumulation on a lens, to instantly process extra information from a subject. “It’s a next-generation camera” because it’s effectively composed of many tiny cameras, each the size of a pixel, that combine their data into a much sharper image, said Kumar, the dean, stopping his tour to watch the camera display.

“This much more closely mimics the way the human eye works, so you need less data than a traditional camera. It’s much less expensive,” said camera project member Kenneth Chaney, as he used the camera to capture a fidget spinner toy whirling in real time — instead of showing a blur like most cameras.

“With event-based cameras, each pixel is its own small camera,” noted Claude Wang, another member of the team. “It collects a lot more data than the eye can process.” 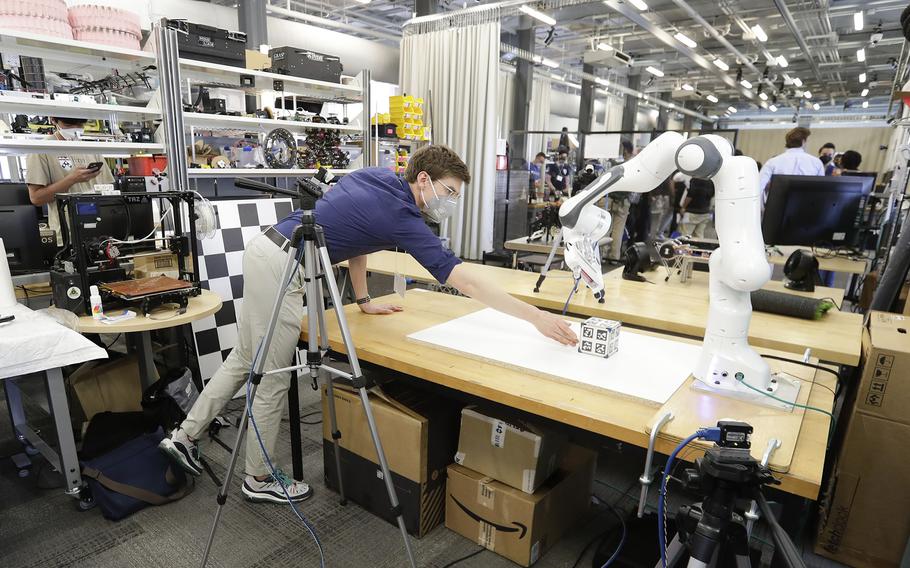 Some of the drones can literally count and measure the trees in a forest — “like Google does for roads,” said Argentina-born student Fernando Cladera, dashing down two flights of stairs to set his drone in the screen of oaks along the Schuylkill for an audience filling a third-floor lab. His Falcon 4 can fly for 35 minutes, using a lithium-ion battery, which weighs a third as much as earlier lithium-polymer systems.

Postdoctoral researcher Marc Badger’s Treeswift drone also zooms through forest canopies. He’s about to graduate and move to Boston, to work with another group of Penn grads, at Aescape.com, which aims to pioneer robot massage therapy. “They use the same Penn software, which was developed to model bird flight,” he marveled.

“A lot of robots are inspired by nature,” said Kumar. “But the reality is, we don’t know much about nature,” so engineers are using robots to learn more, in a self-reinforcing cycle.

At the CMOS group of researchers, the robots are as thin as a human hair; a handful are displayed resting in a copper U.S. penny, in Lincoln’s ear. “That’s about 300 microns across. These are dumb robots: no sensing,” said Lucas Hanson, a Penn doctoral student who helps to fabricate them. “They move in response to illumination” and are expected to have medical applications, such as assembling gene therapies in the body. Sure enough, he turns up the light on the demonstrator, and the robots — short trains of square electrodes and solar cells — wiggle faster.

Mathew Halm is using a desk-based, multi-elbowed robotic arm in a “physically based learning experiment,” tracking and fielding balls and blocks he throws past it, and mapping their trajectories and resting places so they become easier to find and read.

“We think it will be particularly useful for companies that want to automate warehouses,” he said. “So many new products a day, it’s impossible for humans to keep track of all of them.” He’ll be in Boston working for Amazon as an intern this summer.

It’s exciting, sometimes scary stuff. But, Kumar cautions: “Robotics is very speculative. It’s far from clear what will work. People severely underestimate the problems. We have been working on self-driving cars since 1987.

“Ten years ago the money was in drones. Now it’s self-driving cars. It’s unclear where all this will be 10 years from now. But the fundamentals will still apply.”