The meetings go on for the NRA, and guns are allowed, but not during Trump’s appearance 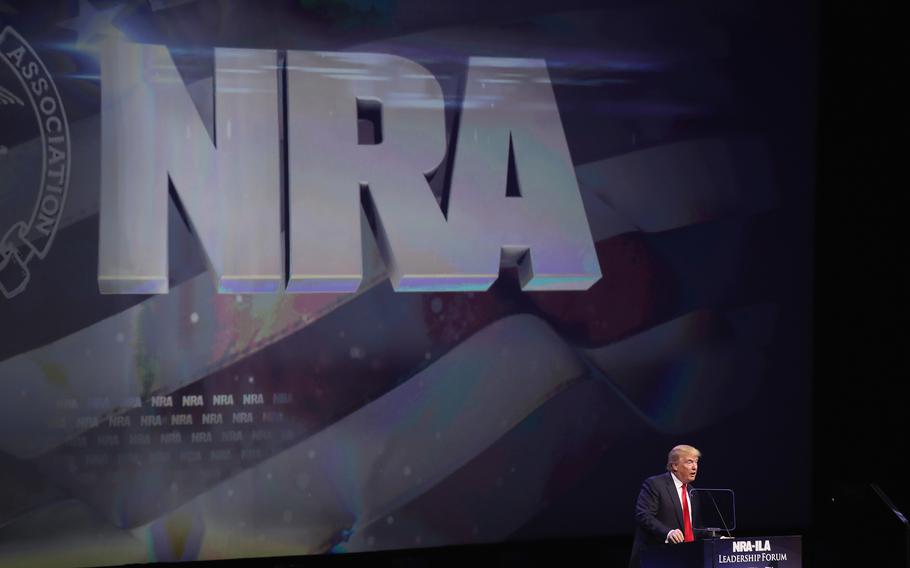 Donald Trump speaks at the National Rifle Association's NRA-ILA Leadership Forum during the NRA Convention at the Kentucky Exposition Center on May 20, 2016, in Louisville, Kentucky. (Scott Olson/Getty Images)

WASHINGTON — After at least 21 people, 19 of them children, were killed in a shooting at an elementary school in Uvalde, Texas, on Tuesday, the National Rifle Association said its deepest sympathies were with the families and victims “involved in this horrific and evil crime.”

But the organization’s annual meeting is on schedule to begin Friday, 275 miles away in Houston despite calls from its critics to call it off.

And guns will be allowed during the event, except during former President Donald Trump’s scheduled appearance on Friday for the group’s annual leadership forum.

The NRA has said the Secret Service is taking control of the hall during Trump’s speech and will prohibit attendees from having firearms, firearms accessories and knives, NPR reported. Ammunition, laser pointers, pepper spray, toy guns, backpacks and other items also won’t be allowed.

The Secret Service will search attendees with magnetometers before they enter the hall, the organization said.

This won’t be the first time firearms have been banned for part of the gun group’s annual convention. In 2018, a similar prohibition was put in place during a speech by then-Vice President Mike Pence.

About Uvalde, the NRA wrote in a statement, “On behalf of our members, we salute the courage of school officials, first responders and others who offered their support and services. As we gather in Houston, we will reflect on these events, pray for the victims, recognize our patriotic members, and pledge to redouble our commitment to making our schools secure.”

The NRA has been in a position like this before: in 1999, the association had its annual meeting scheduled to begin on April 30 in Denver. Then, 11 days before it started, two students entered Columbine High School in Littleton, a Denver suburb, and shot and killed 12 students and a teacher before taking their own lives.

After the Columbine shooting, Colorado politicians were quick to criticize the NRA and pressure the organization to cancel. The City of Denver even offered to pay the organization’s expenses for canceling, CNN reported.

After much internal debate, the NRA refused, but it did scale back the meeting from three days to one and scrapped plans for a gun show. The Associated Press reported that about 8,000 people protested outside of the organization’s convention location in Denver.

The meeting in 2022 is set to continue as scheduled after the Uvalde shooting, complete with “over 14 acres of the latest guns and gear from the most popular companies in the Industry,” its website reads.

Trump confirmed on his Truth Social media platform Wednesday that he would still attend.

“America needs solutions and real leadership in this moment, not politics and partisanship,” Trump said in his statement. “That’s why I will keep my longtime commitment to speak in Texas at the NRA convention and deliver an important address to America.”

Houston Mayor Sylvester Turner resisted calls Wednesday to cancel the NRA’s annual meeting after Uvalde’s deadly shooting, saying the city had a contractual obligation to move forward with the event that he said has been booked for more than two years.

During a City Council meeting Wednesday morning, the mayor said the city could face lawsuits if it backed out now, The Houston Chronicle reported.

Turner, however, said the NRA should postpone the convention.

Multiple protests are already scheduled for outside the George R. Brown Convention Center in Houston, where the NRA’s meeting is scheduled to be held this weekend.