Texas Gov. Abbott going to Uvalde — not NRA — on Friday 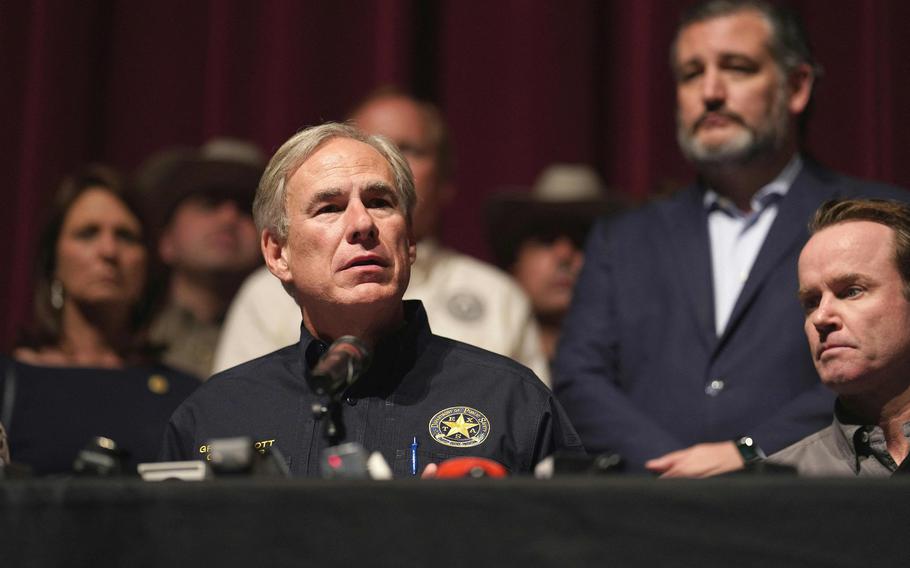 Texas Gov. Greg Abbott, with other officials, holds a news conference to provide updates on the Uvalde Elementary School shooting in Uvalde, Texas, on Wednesday, May 25, 2022. (ALLISON DINNER/AFP)

AUSTIN, Texas — Gov. Greg Abbott is returning to Uvalde on Friday, and will skip the National Rifle Association convention in Houston.

But before returning to the South Texas city still grieving from this week’s school massacre, Abbott will videotape remarks for airing at the gun group’s event, a spokesman said.

“The governor will be addressing the NRA through prerecorded video,” spokesman Mark Miner said.

An advisory issued by the governor’s office late Thursday did not mention the NRA convention, saying the governor would be briefed and then hold a press conference “on state’s ongoing efforts to support the Uvalde community.”

Abbott’s visit to Uvalde will be his second since an 18-year-old shot and killed 21 people at Robb Elementary School there on Tuesday.

The event at the George R. Brown Convention Center in downtown Houston is hosted by the NRA and the Institute for Legislative Action, its lobbying arm.

As of 8:45 p.m. Thursday, the NRA’s online schedule for the event still showed Abbott as a “confirmed” speaker, though it made no distinction between in-person and prerecorded talks.

The group’s website also lists U.S. Sen. John Cornyn and U.S. Rep. Dan Crenshaw as confirmed speakers, though the Texas Republicans said before Tuesday’s mass shooting that they would not attend — Cornyn because of a scheduling conflict and Crenshaw because he was going to Ukraine.

Abbott, who is seeking a third term this year, has been a strong supporter of gun rights. Last year, he signed a bill letting Texans carry a handgun in public without a license or training. Tuesday’s slayings at Robb Elementary in Uvalde, though, renewed a public discussion of school safety and gun laws.

On Wednesday, during Abbott’s first post-shooting visit to Uvalde, he pushed back strongly against suggestions that tighter Texas gun laws might prevent such tragedies. The governor ridiculed gun laws passed in blue enclaves as ineffectual.

Abbott’s Democratic opponent, Beto O’Rourke, interrupted GOP leaders’ news conference. Pointing at Abbott, O’Rourke yelled, “This is on you.” The former congressman from El Paso said Abbott had done nothing to prevent recurrences of mass shootings and “you are offering us nothing.”

Abbott shot back, his voice rising, “We need all Texans to, in this one moment in time, put aside personal agendas, think of somebody other than ourselves, think about the people that were hurt!”

At the U.S. Capitol on Thursday, Senate Majority Leader Chuck Schumer of New York fed Abbott’s words back to him.

“He asked people to put their agendas aside and think about someone other than themselves,” Schumer said. “My God, how dare he? What an absolute fraud the governor of Texas is. And this is the same Gov. Abbott who tomorrow, tomorrow, will go speak at the NRA convention in Houston.”

Hours after the massacre, Abbott dismayed even some of his supporters by not canceling a planned campaign fundraiser in Huntsville on Tuesday night. Other state politicians had rushed to cancel theirs. On Wednesday, an Abbott spokesman said all campaign activity, including a Wednesday night fundraiser, had been postponed “until further notice.”

As the Friday NRA event approached, Abbott received pressure from individuals and groups that he pull out.

“We implore you to make the right decision,” NAACP President Derrick Johnson wrote the governor. “Do not attend. Instead, with grave urgency, enact common-sense gun control measures in your state that will save countless innocent lives, including those children.”